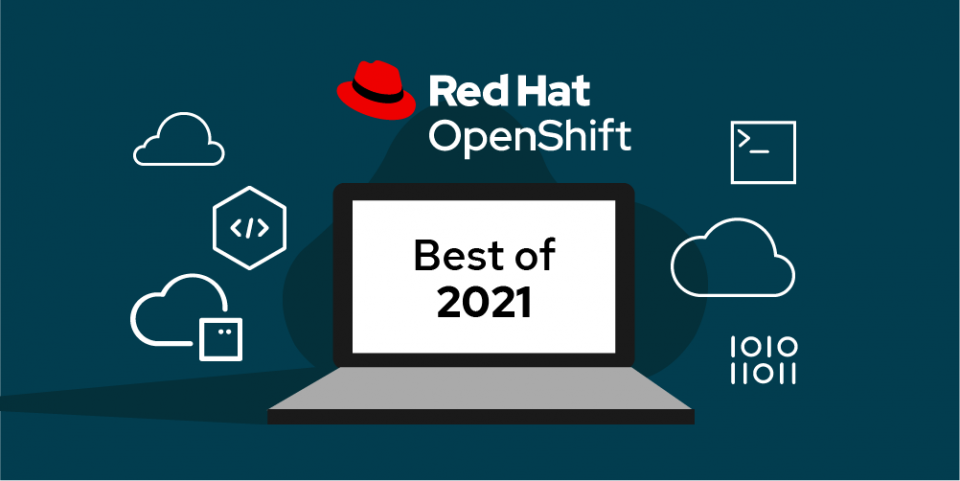 2021 was a big year in the world of Kubernetes and Red Hat OpenShift, and over the past twelve months, we have aimed to provide content that will satisfy developer curiosity on how to best use these platforms, from info on the big release of OpenShift 4.8 to tutorials on deploying Helm charts and working with OpenShift Serverless Functions. Keep reading for these highlights and more.

Check out the other articles in our Best of 2021 series:

Perhaps the biggest news of the year in the OpenShift world was the release of version 4.8 of the OpenShift Container Platform. Developers were particularly interested in the outline of what's new in the Red Hat OpenShift 4.8 console from Serena Chechile Nichols.

The OpenShift developer dashboard provides sample applications that are just a few clicks away from deployment, and the samples on offer saw a refresh in OpenShift 4.8, with four new ones added and four updated.

Developers using the Developer Sandbox for Red Hat OpenShift to experiment with containerized application development might have hit a snag this year after Docker set a limit of 100 downloads every six hours from a single IP address for anonymous users. In one of our most popular articles of the year, Joel Lord offered a tip on how to work around Docker's new download rate limit on OpenShift. (Once you figure it out, you can learn more about getting started with the Developer Sandbox or check out Joel's DevNation Tech Talk on the subject.)

Developers focusing on Windows and .NET might feel somewhat left out of the containerization revolution at times, but Don Schenck says that shouldn't be the case. He explained how you can containerize .NET applications on OpenShift, examining how the process works with both Windows containers and Linux containers.

The headless CMS Strapi is fast becoming a Node.js favorite when it comes to creating content delivery systems with JavaScript. In one of our most popular articles of the year, Joel Lord explains how you can keep the development cycle moving by quickly deploying Strapi applications to Kubernetes and OpenShift. Node.js devs also got a good tutorial on monitoring Node.js applications on OpenShift with Prometheus.

Apache Kafka is an enterprise messaging system that can move massive amounts of data, and Red Hat OpenShift Streams for Apache Kafka is Red Hat’s fully hosted and managed Kafka service. Bernard Tison created a tutorial to help you get started using this service.

Helm charts are a declarative model for defining your Kubernetes application, and when combined with Jenkins CI/CD and OpenShift, you can define your architecture rather than scripting it. Shailendra Kumar Singh lays out how the Helm chart deployment process works on OpenShift 4.

Red Hat recently conducted a Customer Empathy Workshop series that, among other things, focused on OpenShift's CI/CD tooling. After analyzing some of the problems and pain points, we put together some tips for improving CI/CD in OpenShift.

Need more? Here are the rest of 2021's most popular OpenShift articles from Red Hat Developer: