Red Hat OpenShift 4.8 brings many exciting new capabilities for developers. This article focuses on what’s new in the OpenShift console, including devfiles and certified Helm charts in the developer catalog, the ability to drag and drop Spring or Quarkus JARs directly from your desktop, a streamlined developer experience for building, deploying, and scaling cloud-native applications in hybrid-cloud environments, and much more. Developers will also find enhanced features for Red Hat OpenShift Serverless, Red Hat OpenShift Pipelines, Red Hat OpenShift GitOps, and more.

Developers can drag and drop their fat JAR files for Spring and Quarkus apps directly from their desktop into the console topology view. The system does the rest of the work to deploy the applications on OpenShift for quick and easy testing. The Upload JAR feature lets you quickly and easily test applications before pushing them to Git, without having to build a container image. This new feature expands how you can code and test locally using a command-line interface (odo) and IDE extensions in VS Code and IntelliJ for OpenShift Connector, Java, and Quarkus.

As a console user, you can still check your code into your Git repository and use the Import from git feature in the console. You can also build a container image, push it to a registry such as Quay, and use the Deploy image feature from the console.

To improve developer onboarding, we have a new Getting started resources card on the Add page, as shown in Figure 1. This card provides resources to create applications using samples, build with guided documentation, and explore new developer features.

In many of the discussions we are having with developers, one of the biggest pain points is around configuration, settings, and managing developer environments. Developers want to advance quickly to building, running, and debugging projects. Devfiles offer exactly that capability.

In the newest version of OpenShift, you can now find devfiles in the developer catalog, as shown in Figure 3. You can use these to bootstrap a new project for a particular language or framework. Each devfile provides sample projects for quick use. 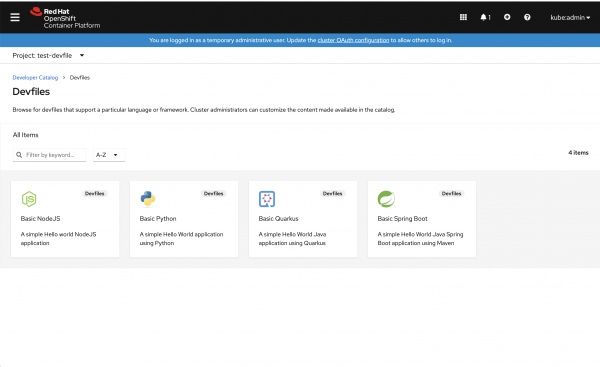 Figure 3: Devfiles in the developer catalog.

Devfiles are configuration files that set up a cloud-native project with the required information to build, run, debug, and more. Devfiles are already used in odo and CodeReady Workspaces. Check out the article Developing your own custom devfiles for odo 2.0 to learn more about creating custom devfiles.

The popular serverless method of running applications benefits from several enhancements in OpenShift 4.8.

We now have enhanced scaling options for Knative services. The Concurrency utilization feature allows you to set the percentage of concurrent requests that have to be active before scaling up. Autoscale window allows you to set the amount of time to look back while making autoscaling decisions. The service is scaled down to zero if no requests are received in that time period.

The OpenShift developer console now has feature parity with Tekton within the Pipeline Builder and other pipeline-related flows. The console supports WhenExpressions, finally tasks, and more. WhenExpressions are preceded by a diamond shape and finally tasks are enclosed in a grouping with a white background, as shown in Figure 5.

With OpenShift GitOps 1.2 installed, you will see some updates to the Environments page. You are now able to see the status of the environments to which each application has been deployed, as shown in Figure 6.

We are always looking for ways to provide a more streamlined user experience. In response to customer feedback, we now support two additional ways to customize the developer experience.

Hiding features from the Add page

Cluster admins can now hide features from the Add page. To achieve this, add the addPage customization in the Console spec. A code snippet is available in the YAML editor to perform this customization. That code snippet shows how to hide the Import from DevFile entry, but you can adapt the code to your needs.

Cluster administrators can now customize which roles are being shown in Project Access in the developer console. Default roles are Admin, Edit, and View. But the cluster administrator could configure a list of ClusterRoles to override the default roles. To do so, add a projectAccess customization in the console spec. A code snippet is available in the YAML editor to perform this customization.

We want your feedback!

Developing your own custom devfiles for odo 2.0