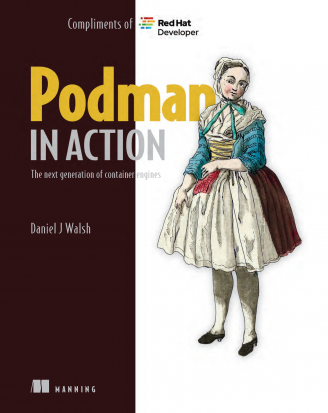 Dive into Podman, the next-generation container engine that manages containers rootlessly. Podman is an excellent tool for developers looking to containerize their applications securely because it provides extra layers of security unavailable in Docker and other container platforms.

Podman in Action introduces Podman’s features and capabilities, including how to work with containers, build container images, and convert containerized applications into either single-node services to run on edge devices or Kubernetes-based microservices. It discusses Podman’s unique advantages over Docker and shows how you can easily migrate your Docker-based infrastructure.

Written by Daniel Walsh, who leads the Podman team at Red Hat, this book contains easy-to-follow examples to help you learn Podman quickly, including steps to deploy a complete containerized web service.

The Kubernetes YAML file is the object used to launch pods and containers within Kubernetes. In chapter 5 you learned the configuration files used by Podman are written using TOML, which is very similar to YAML. Both configuration languages are attempting to be human-readable. YAML relies on indenting substanzas which is different syntax then you learned with TOML. You can go to the https://yaml.org/ web site to learn more about the language.

If you are going to work a lot with Kubernetes YAML files, it is nice to have a text editor or IDE, like Visual Studio and vscode, that can at least understand YAML, even better if it knows the Kubernetes language. Kubernetes YAML is descriptive and powerful. It allows you to model the desired state or your application in a declarative language. As we stated in the introduction to this chapter, writing these YAML files is a barrier for developers to get through when moving their containers from a local system to Kubernetes. Most developers just web search an existing Kubernetes.yaml file and then begin cutting and pasting their container command, image and options into the yaml file. While this works, it can lead to unintended consequences, and often unnecessary work. Scott McCarty, product manager of Podman, tossed out an idea: “What I would really like to do is help users get from Podman to orchestrating their containers with Kubernetes.” This led the Podman developers to create a new Podman command podman generate kube.

Imagine you want to take the containers you generated in the previous chapters and run them within Kubernetes. You need to write the Kubernetes YAML file to make this happen. Where do you start?

You can recreate the containers/pods locally using Podman on the command line using the same Podman run, create, stop commands you have learned in the previous chapters. Using the following commands, re-create the container you have been working with.

First remove the container if it exists using podman rm. Notice I introduce a new flag –– ignore, which tells the podman rm command not to report errors when the container does not exist. Then recreate the container from the command line.