Red Hat OpenShift is a Kubernetes distribution that makes it easy to deploy and scale applications in the cloud. In this hands-on lab, you will learn how to deploy a full-stack JavaScript application in an OpenShift cluster.

Starting from source code, you will take an application that runs locally and deploy it in the Developer Sandbox for Red Hat OpenShift. This lab consists of three parts:

Note: See the DevNation Tech Talk OpenShift Developer Sandbox: Kicking the tires for a video guide to this deployment. 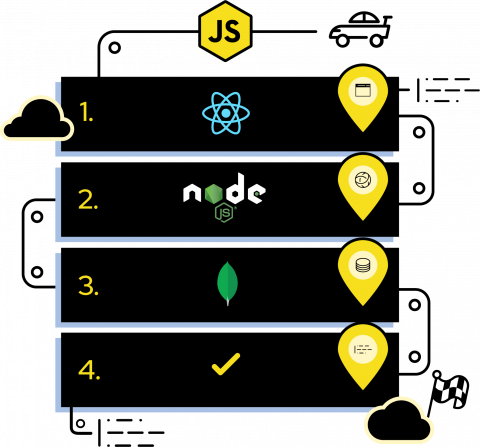 The command-line tools shown in Table 1 are required for running the exercises in this lab. Please have them installed and configured before starting the lab.

Set up your Developer Sandbox

This section gets you started with Developer Sandbox for Red Hat OpenShift, and with OpenShift itself. 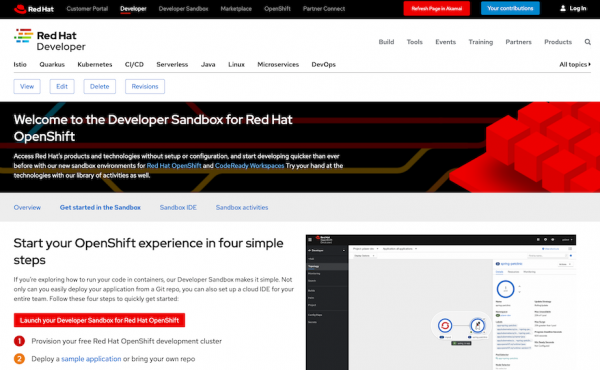 Use your existing Red Hat account or create a new one, then follow the instructions on the screen. When you are done, you should be redirected back to the Developer Sandbox page, but this time, it should display a button labeled Start using your sandbox. Clicking on it opens the OpenShift login screen shown in Figure 2. 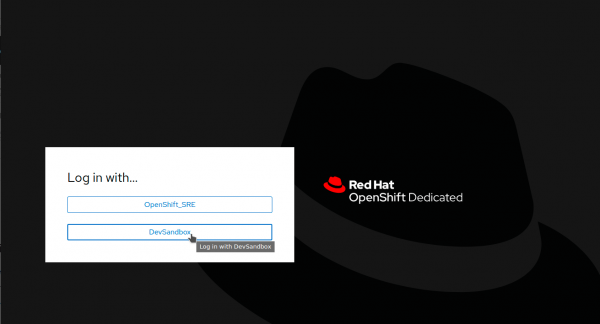 Figure 2: Logging in to OpenShift to get access to the Developer Sandbox.

After you log in, you should see a DevSandbox button. Clicking this button opens your new OpenShift cluster console. Feel free to take the tour or skip it for now and continue with this lab.

To interact with your OpenShift cluster, you need the oc command-line tool. Thankfully, the OpenShift team made it easy for you to install it. To get oc for your operating system, click on the question mark icon at the top right of the OpenShift screen. From the dropdown list that appears, select Command Line Tools, shown in Figure 3. This option opens a page with the links required to install oc.

Figure 3: Getting the oc command-line tool.

Once the tool is installed, click the link for Copy Login Command from the same Command Line Tools page. A new window will open with the authentication screen. Select DevSandbox, then click the Display Tokens link on the next page.

On this new page, you can find a command that starts with oc login. Copy this whole line with the --token and --server parameters and paste it into your terminal:

You should get a message back confirming that you successfully logged in to the developer sandbox:

The application that you will deploy to this OpenShift cluster is a URL shortener and redirection service. It has a React front end to manage your links and connects to a Node.js API. That express server then connects to a Mongo database to store and retrieve the URLs.

Another application, called the "redirector" micro-service, performs a database lookup and redirects the traffic to the matching URL. This service is built in PHP.

Feel free to explore the application source code. If you want to run it locally, you can do so with docker-compose or podman-compose. The following command starts the application in development mode:

To view the application, open a browser and visit http://localhost:3000.

This section shows how to build a container for the front end. If you want to skip this section and jump directly to the deployment, you can use a pre-existing image and go to the section Deploy the front end.

To deploy this application, you can’t just use the same container that you used in development. That container is for a development environment and includes a hot-reload server, among other things.

For your production environment, you will package up your React application and deploy it on an Nginx server. Ideally, it will use environment variables for its configuration and will run as a non-root user for maximum security.

Note: To find out more about building front-end containers, see the article Building rootless containers for JavaScript front ends. We'll use the templates provided in that article for this lab.

To avoid copying the whole node_modules folder in your container, you can also create a .dockerignore file:

The next step is to build the image that, later, we'll run in a pod in our OpenShift cluster. Before we build the image, we need to consider the image registry to which we'll be pushing our image. This is because you'll need to assign the registry name during the build.

The image name must be in the form of $REGISTRY_HOST/$REGISTRY_USERNAME/urlshortener-front.

The %REGISTRY_HOST% is based on which registry you are using.

Start by setting the values of these two environment variables. Use the following commands, substituting your own values where necessary:

You are now ready to build this image:

Note: If you are using Podman instead of Docker, you need to use the --format=docker option to push your image to Docker Hub.

Push the image to a registry

Now that you have an image ready to be deployed, you can use the docker push command to store this image into a registry. Feel free to use any registry for this step. If you don’t have access to an image registry, you can create a free account on Quay.io or skip to the deployment step and use the publicly available image.

To push this image to a registry, use the following command, replacing %REGISTRY_USERNAME% with your actual username:

Important: If you are using quay.io as your registry, the image is added to your registry as a private image. You must go into the registry settings (at quay.io) for the image and set the Repository Visibility to "public".

This application image is now available to be used by OpenShift.

You are now ready to deploy this image in your OpenShift cluster. Using the oc command-line tool, you can initiate the deployment with a single command:

If you didn’t push your custom image to a public registry, you could also use this image — hosted at docker.io — with the latest version of the URL shortener front end. Note that this command does not include the registry host name (docker.io). This is because, if the registry host is not specified, the default value of "docker.io" will be used.

OpenShift will now download the image from your registry and create a new application with it.

Note: If you run into an error message about hitting a rate limit, see the article How to work around Docker's new download rate limit on Red Hat OpenShift.

The front end has been deployed to your cluster, but no one can access it yet from outside of the cluster. To enable access, you need to expose the service created with a route. Enter the following command:

Your application is now fully deployed to OpenShift, and you should be able to see it in the OpenShift Topology view of your application, shown in Figure 4.

If you click on the Open URL button next to your application in the Topology view, it should open your front-end application.

From here, you can view the list of redirection URLs (currently empty). You can also see the form to add new URLs (currently nonworking). Finally, a third link in the navigation bar leads to an "About" page. There, you can see the status of the Node.js API, the Mongo database, and the redirector service, as shown in Figure 5. 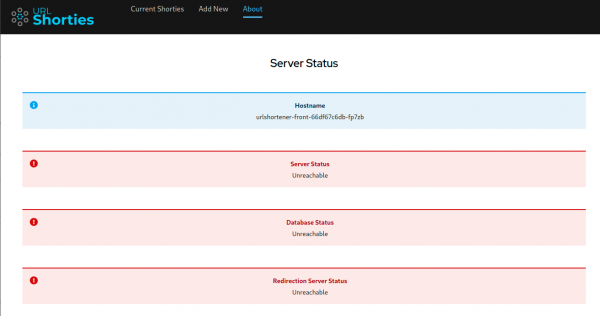 All the indicators are currently red because the front end doesn’t have a back end to talk to. We'll address this issue in the second part of the lab.

In Part 1 of this lab, you've started on the Developer Sandbox. You downloaded an application, deployed it to OpenShift, and the front end is working. We'll complete the application in Parts 2 and 3 of this lab.

More in this series

Are you ready to move onto Part 2 of this activity series?

In Part 2, you will deploy the back end and connect it to the front end using environment variables, then add a health check.