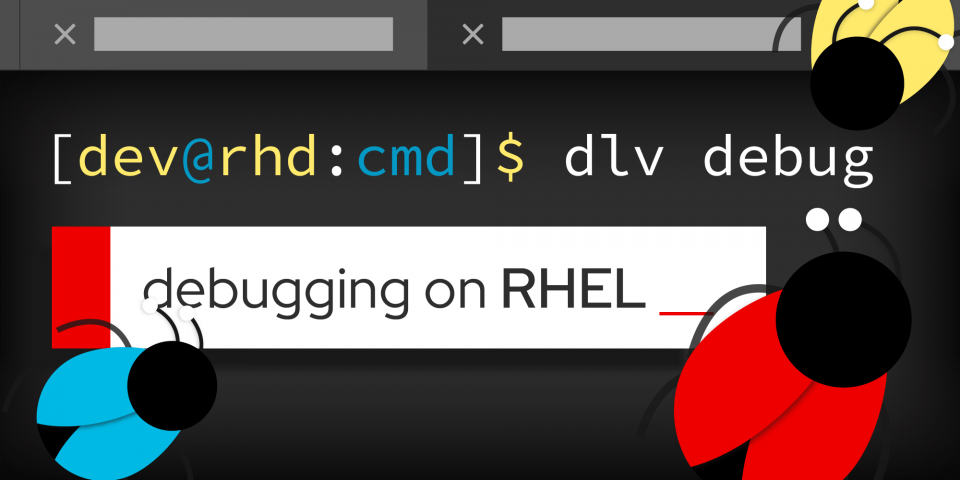 Delve is now available on Red Hat Enterprise Linux (RHEL). Starting in the RHEL 8.2 and devtools-2020.2 releases, the Go language debugger Delve will be installed with the Go toolchain itself via the go-toolset package.

Being tailored specifically for Go, Delve has intricate knowledge of the Go runtime and provides features and an environment not available in other debuggers. The tool aims for simplicity of use, staying out of your way as you figure out what's going wrong with your program. Delve also offers powerful features that let you debug your Go programs as quickly as possible.

Installation requires only one command to install both Go and Delve:

If the command is successful, both the Go toolchain and the Delve debugger will be installed and ready to use.

As I mentioned earlier, the goal of this tool is to stay out of your way as much as possible. This means removing many manual steps to provide a straightforward debugging experience.

As an example, the Go compiler tries to choose sensible defaults wherever feasible, so it turns on optimizations by default. The optimizations are great for running your Go programs in production but they can make debugging more difficult. Delve solves this issue by turning off optimizations automatically when building your binary. Delve can also work alongside other tools such as Mozilla RR, which is currently not available as a package on RHEL, but can be built from source or installed from upstream releases.

Delve aims to be as simple to use as the Go command itself. The basic use case to start debugging a package is:

Issuing this command causes Delve to compile your program with optimizations disabled automatically, and land you at a command prompt ready to start debugging.

The other most common ways to begin debugging your Go program with Delve are to attach to a running process or to execute a pre-built binary:

The only potential downside to these options turns up if the binary was built with optimizations. In this case, some information might be unavailable to the debugger. So, if you want to invoke Delve on a precompiled binary, we recommend building it with optimizations disabled, using the following flags:

Let's go over a few additional tips and tricks to help you make the most of Delve.

Delve can call functions in the debugged process

For instance, to jump to a function named main.callme within Delve, enter:

Instead of starting a debugging session, you can connect to and trace a running binary. For example, you might trace a function named callme as follows:

The output from Delve displays both the argument and the return value when the function is called—all without ever starting an interactive debug session!

For instance, you can switch to the Mozilla RR backend for record-and-replay debugging as follows:

To learn more about this technique, please watch my talk, Deterministic debugging with Delve.

Delve lets you script the debugger and add your own commands

To provide an API for users to automate Delve or add new commands, Delve uses the scripting language Starlark, which is similar to Python and was developed by the project that creates the Bazel build tool. See Delve's API documentation for more about this tool and how to use it.

Now that Delve is available in the go-toolset package on RHEL, debugging Go programs has never been easier. Try it out and give your feedback in the upstream repo.