A developer's guide to CI/CD and GitOps with Jenkins Pipelines 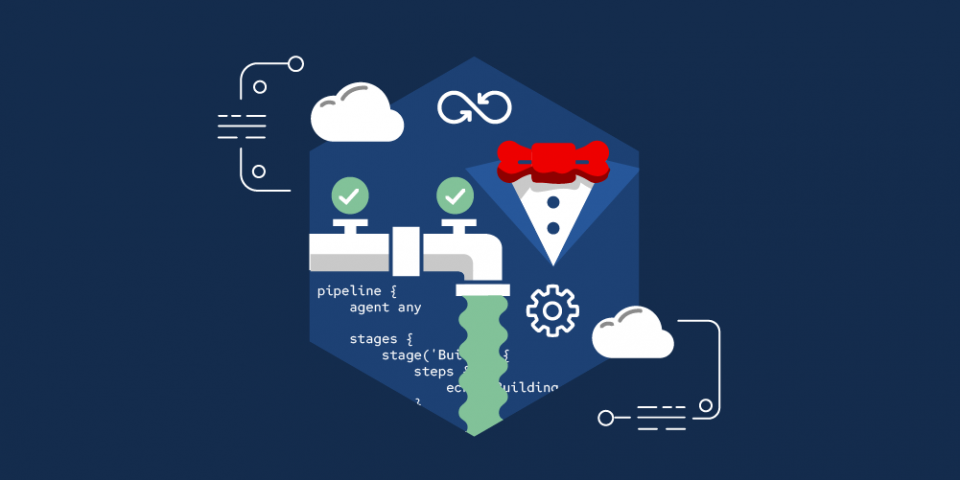 CI/CD, or continuous integration and continuous delivery, is an essential part of the modern software development life cycle. Coupled with GitOps, CI/CD allows developers to release high-quality software almost as soon as they commit code to a repository such as GitHub.

Automation is a key factor for implementing effective CI/CD. In this process, developers and release engineers create scripts that have all the instructions needed to test the code in a source code repository before putting it into a production environment. The process is efficient but complex. Fortunately, there are many tools that lessen the burden.

Jenkins is one of the most popular tools used for CI/CD. Jenkins has been around for years and has undergone numerous revisions, adding features all along the way. One of the most transformative features added to Jenkins is the ability to run Jenkins Pipeline jobs driven by an automation script stored in a Jenkinsfile. Developers and release engineers can use Jenkinsfiles to combine the practices of CI/CD and GitOps into a unified deployment process. That's the focus of this article.

We'll start with a brief refresher of what Jenkins is and how it applies to both CI/CD and GitOps. Then, I’ll guide you through how to use a Jenkinsfile to create deployments that combine CI/CD and GitOps.

Jenkins is an open source tool for managing deployment processes, which can range from a single task—such as running a unit test against source code—to a complex deployment process embodying many tasks. From its first release, Jenkins allowed companies to standardize their deployment process: Once a job was configured on the Jenkins server, that job could run repeatedly in the same manner according to its configuration. The developer defined the tasks to run and when to run them, and Jenkins did the rest.

Integrating CI/CD and GitOps with Jenkinsfiles

A Jenkinsfile is a text file, written in the Groovy programming language, that defines each step in a Jenkins job. Usually, a Jenkinsfile is created by a developer or system administrator with a detailed understanding of how to deploy the particular component or application.

Using a Jenkinsfile makes transferring jobs between servers much easier. All that’s required is to spin up a new job in Jenkins, bind that job to the Jenkinsfile that’s stored in version control, and then declare when the job is supposed to run. All the details and intelligence about the deployment are defined in the Jenkinsfile.

GitOps and the single source of truth

Regardless of the approach you choose, the important thing to understand about GitOps is that the single source of truth for all deployment activity is the code repository. Using a Jenkinsfile that’s hosted in a repository to define a job that runs under Jenkins fits well with the GitOps sensibility.

Now that we’ve covered how Jenkins implements CI/CD, and how it fits into the GitOps way of doing things, let’s move to a concrete example. Over the next few sections, we will implement a CI/CD process by running a Jenkinsfile under a Jenkins Pipeline job.

Recall that a Jenkinsfile is a text file that describes the details of a job that will run under Jenkins. This section presents a job that executes a three-stage deployment to build, test, and release a Node.js application:

Note that the Jenkinsfile has two root-level sections: node and pipeline. We'll look at these next.

The node section of the Jenkinsfile

The node section is the first step in the deployment process. It establishes a workspace in the Jenkins server under which a deployment runs. The workspace runs a Node.js application.

Note: The word node has two different meanings here. Used by itself in a Jenkinsfile, node describes the workspace. When used in the variable basic_node, it refers to the Node.js runtime environment.

The npm --version command is executed as a parameter to the sh command. The sh command is used in the Jenkinsfile to execute commands a developer typically runs in a terminal window at the command line.

The pipeline section of the Jenkinsfile

The pipeline section that follows the node section defines the deployment that executes in three stages: build, test, and release. Each stage has a steps subsection that describes the tasks that need to be executed in that stage.

The test stage executes a sh command that, in turn, runs a npm test command that is special to the application. Executing npm test runs the various tests that are defined within the Node.js application’s source code.

Binding a Jenkinsfile to a Jenkins Pipeline job

Binding a Jenkinsfile to a Jenkins Pipeline job is straightforward, as shown by the sequence of screens in Figure 2. Here are the steps: 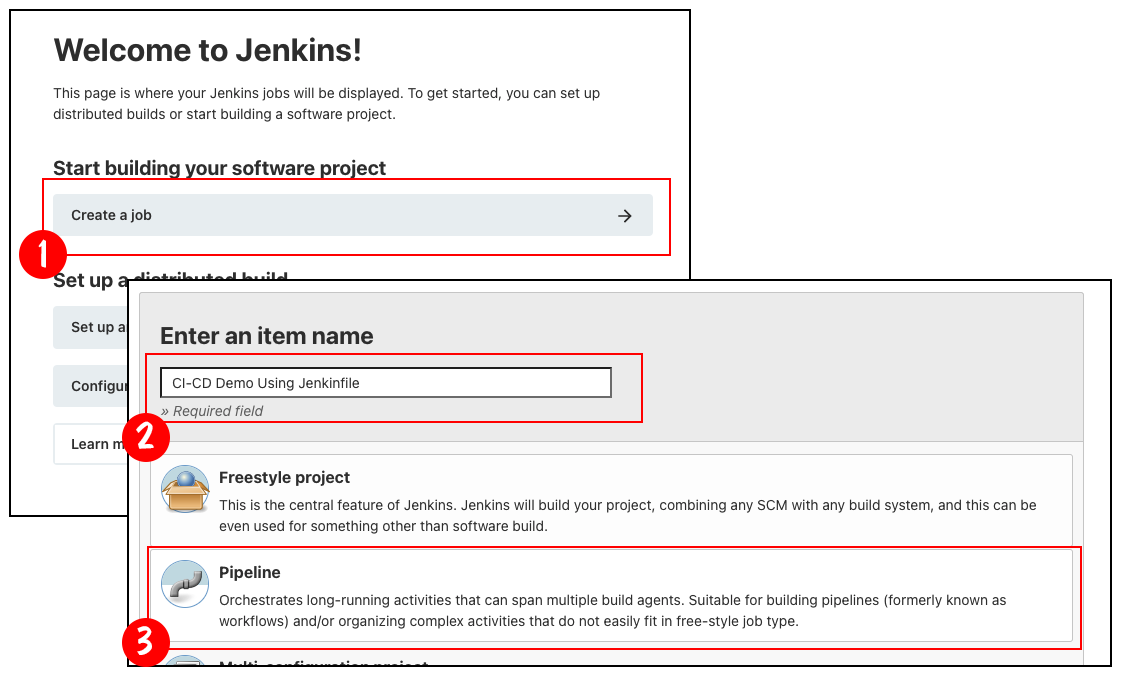 Figure 2. On the Jenkins Dashboard, you create and name a job and mark it as a Jenkins Pipeline.

Once the Jenkins Pipeline job is created, it needs to be configured. Figure 3 shows the first two steps in the process:

In Figure 3, the job is configured to poll the source code repository every 15 minutes.

Once the description and polling interval are declared, complete the configuration that binds the Jenkinsfile to the job. The following steps are illustrated in Figure 4:

You can have many alternative Jenkinsfiles, with names such as Jenkinsfile_k8s or Jenkinsfile_windows. This means that you can use the same source code repository for a variety of jobs. Each job will execute its own build instructions described by the relevant Jenkinsfile.

Note: The versatility that comes with using many different versions of Jenkinsfiles is particularly useful for working in application environments that have complex provisioning and configuration requirements. For example, Kubernetes and OpenShift configurations support a wide variety of settings—everything from container configuration to security rules. Putting the provisioning and configuration settings in one Jenkinsfile can become a maintenance headache. But, splitting up configurations among many files in a way that is particular to each environment makes deployment management a lot easier. The savings in labor alone can be significant.

The beauty of it all is that the job's runtime details are described in the associated Jenkinsfile. Should the deployment process need to change, all you need to do is change the Jenkinsfile in the source code repository.

The benefits of using Jenkins Pipelines for GitOps and CI/CD

There are many benefits to using Jenkins Pipeline jobs in conjunction with a version control server such as GitHub, and thus combining CI/CD and GitOps.

Second, declaring the build process in a Jenkinsfile makes it easier to automate deployment. You don’t have to fiddle with a UI to get your programs out; you can just write the code and let the Jenkins Pipeline do the rest.

Finally, Jenkins is a well-known CI/CD tool. It has all the features that are required for implementing a viable GitOps-focused deployment process. For companies already using Jenkins, making the leap to GitOps using a Jenkinsfile is much easier than starting from scratch. And for companies not yet using Jenkins, the learning curve is acceptable. This technology has proven itself over the years, and there are many learning resources and examples developers can use to get up to speed.

GitOps has a lot to offer developers who want to automate their deployment processes using scripts that are stored as a single source of truth in a version control management system. Such control and reliability are compelling reasons to make the move.

You can't adopt GitOps in a day or two. It takes time to get the organizational processes in place. But many developers and their organizations will find that the time required to get GitOps working under a Jenkins Pipeline job, using a Jenkinsfile, is a good investment, especially for the benefits at hand.

Learn more about GitOps and CI/CD on Red Hat Developer

Visit the following articles and resources for more about using GitOps and CI/CD for secure, automated deployments: