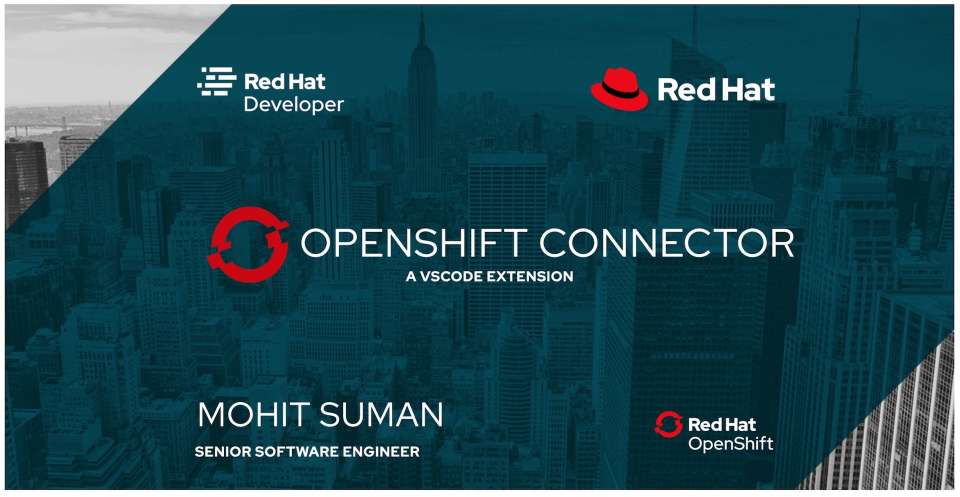 Let's take a deep tour of the new features with respect to OpenShift Connector.

OpenShift Connector on VS Code provides an end-to-end developer experience for interacting with a Red Hat OpenShift cluster. By leveraging the IDE features, developers can create, deploy, and debug (upcoming) applications and then deploy directly to the running OpenShift cluster.

In upcoming releases, the connector will also support debugging for NodeJS and Java applications. In addition, here's a look at the features.

When it comes to cluster management, OpenShift Connector on VS Code:

When it comes to development, OpenShift Connector on VS Code:

When it comes to deployment, OpenShift Connector on VS Code:

When it comes to monitoring, OpenShift Connector on VS Code:

This getting started guide offers workflows for using the extension and enhancing the developer experience when working on OpenShift.

Create a component in an OpenShift cluster

Next, log into your server and save your login for subsequent use. More specifically, Log into the given server with the given credentials, or log in using the bearer token for authentication to the API server.

To deploy a component:

Note: All component configurations are saved to /.odo/config.yaml. You can commit this file to your repository to easily recreate components with the same configuration later, or to share it with someone else.

In this example, we will see how to create a NodeJS-based component, deploy it on a Red Hat OpenShift 4.2 cluster, and access the cluster routes:

Once the action is successful, the component is created and added to the local configuration. The state of the component is "not pushed" and is updated in the tree view for the cluster. At this stage, nothing is pushed at the cluster, as you see in Figure 10:

Figure 10: This component has not yet been pushed.">

Watch the push command's progress streamed directly in the integrated terminal view, as shown in Figure 12:

Figure 13: The component has now been pushed.">

Let's create a route for the component and expose the ports associated with it by selecting Component -> New URL. If the component supports multiple ports, the extension prompts the user to select the port attached to the route created. The URLs that are generated using this command can be used to access the deployed components from outside the cluster.

Once the new URL is created, it has to be pushed to the cluster, so that the new route is assigned to the cluster. You can then access the route by right-clicking the project and selecting Open in Browser, as shown in Figure 14: 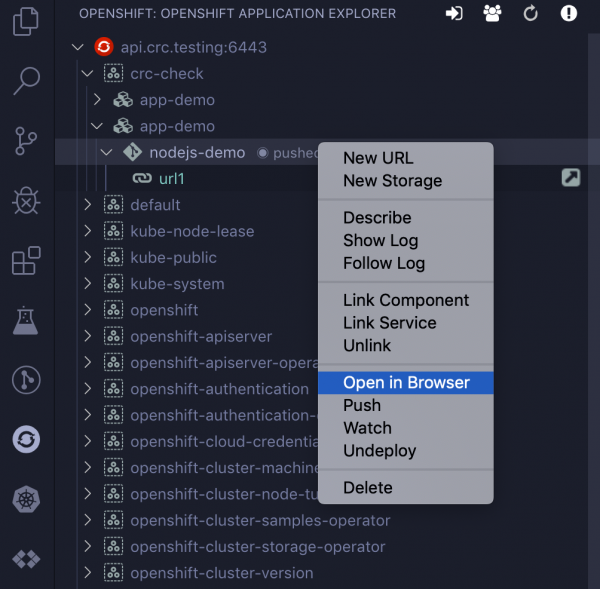 If there are multiple routes associated with the component, a prompt is displayed for you to select the required one and proceed.

Add storage to a component

Do the following to let the user create storage and mount it to a component:

This extension adds two context menu options regarding logs. The first is Follow Logs, which lets you follow the logs stream for the running pods within the integrated terminal output from your deployment. The second is Show Logs, which lets users view logs from a specific resource, as shown in Figure 20: 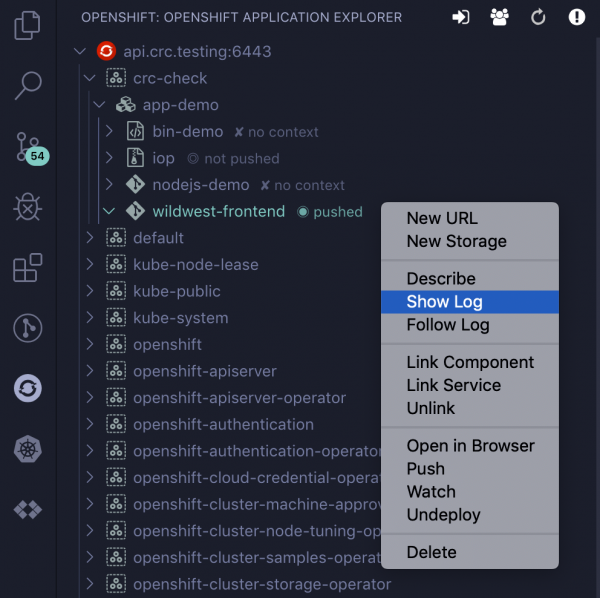 To undeploy a component from the cluster and keep it in the local configuration, run the Undeploy command from the component's context menu, as shown in Figure 21: 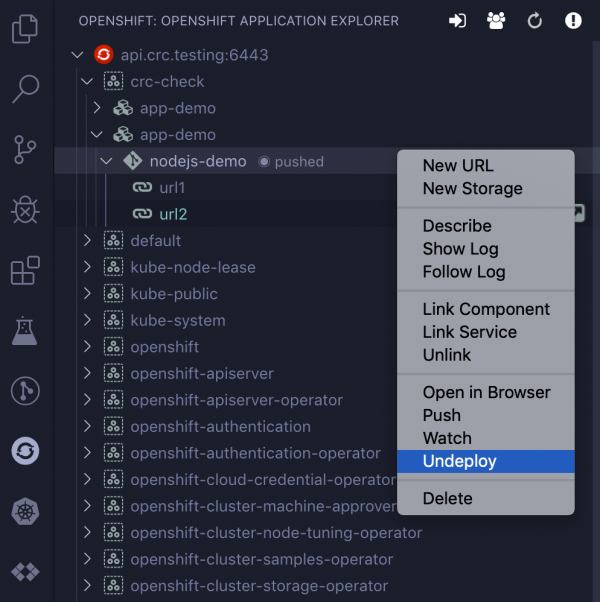 To delete the component from the cluster and local workspace, select Component -> Delete. The component will be deleted from the local folder configuration, and the .odo file will be removed from the context folder, as shown in Figure 22: 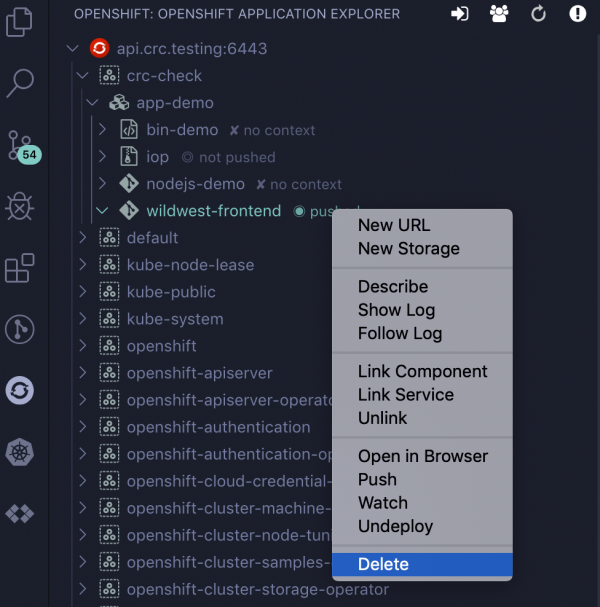 Users can describe a specific resource, as shown in Figure 23, including information such as its name, type, source, environment variables, and debug ports exposed: 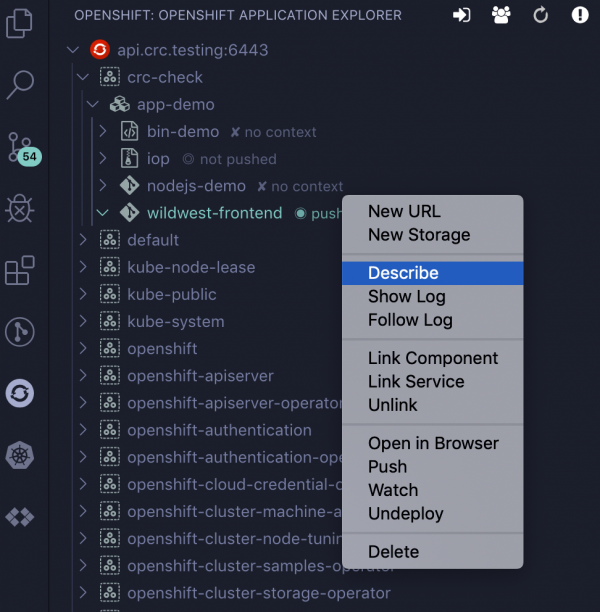 Real-world applications contain multiple components and services that need to work together. Using this extension, users can perform the following: 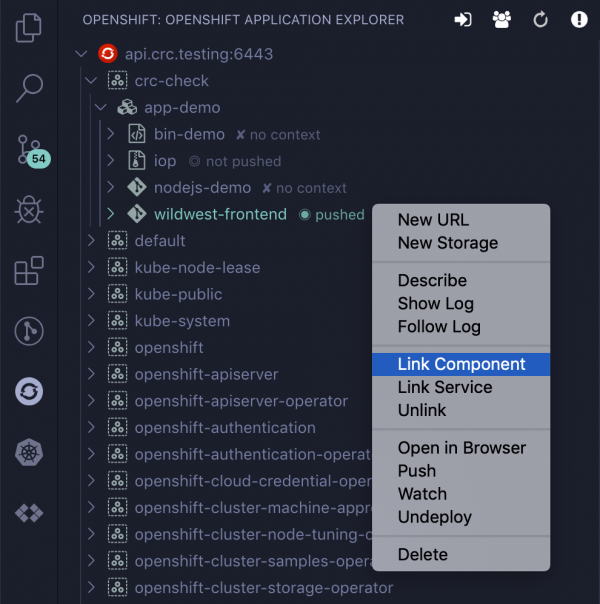 For easier management of Kubernetes resources, users can use the Kubernetes explorer (added as a dependency), which is accessible from the VS Code Activity Bar. This explorer lets you access information about your Kubernetes clusters and resources. You can set an active OpenShift Project, stream and view its logs, start and stop builds, and much more. Here is a selection of the actions available for interacting with your OpenShift resources:

If you encounter any bugs, confusing commands, or unclear documentation, or if you would like to propose a feature request, you can submit your feedback by:

Try the latest version of OpenShift Connector from the VS Code Marketplace. There are several infrastructure options available, including Laptop, which allows you to install an OpenShift cluster locally using Red Hat CodeReady Containers.