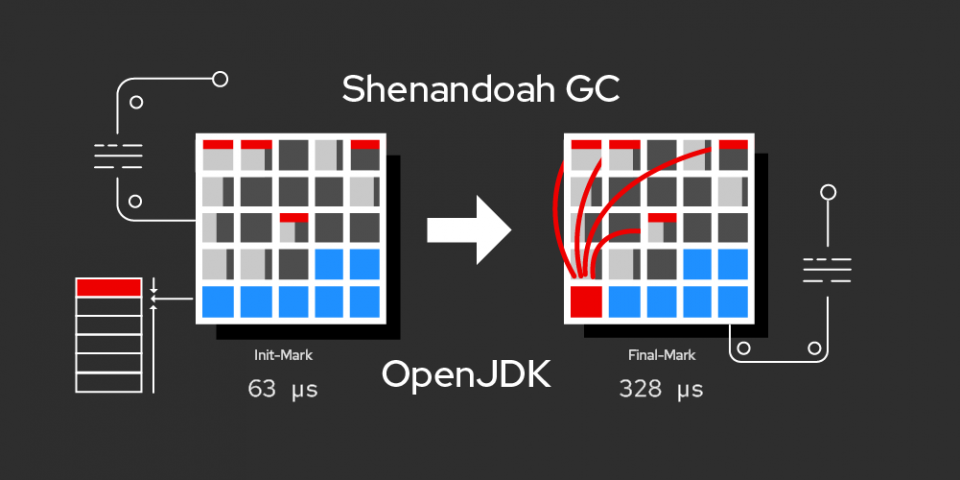 What is thread processing and why do we need to stop the application for it? Java programs are executed in threads, and each thread owns a stack: A list of stack frames, each frame holding local variables, monitors, and other information related to the currently executed method. Most importantly, in the context of Java garbage collection, it holds references to heap objects (e.g., local variables to reference typed objects).

When a garbage collection cycle is initiated, we first scan all of the threads' stacks to seed marking queues with the references that we find on stacks. We do so at a GC pause (safepoint) because we need a consistent state of the stack at mark start, without the thread's execution concurrently messing with the stack. When we're done, we resume execution and traverse the graph of reachable objects, starting from the references that we found during the initial thread scan.

How can we improve the situation and process thread stacks concurrently? We do so by utilizing a mechanism called stack watermarks (originally implemented by ZGC developers). The central observation is that all the thread stack's action happens in the top-most frame: The currently executed method. All the frames below that are basically static and don't change—they can safely be scanned concurrently by garbage collection threads. All we need to do is coordinate GC threads with executing threads whenever a stack frame is destroyed (e.g., by a return to caller, or by throwing an exception), and thus falls out of GC processing. This coordination is achieved by the stack watermark, a pointer that tells us which parts of the stack are safe to scan, and a barrier that allows garbage collectors to deal with returns. Figure 1 illustrates the role of the stack watermark in concurrent thread processing.

Let's consider an example. Say, at the beginning of marking, during the initial pause, we set the stack watermark to the top-most frame of each thread and arm the thread. That means that we consider all frames as safe for concurrent scanning, but none (yet) for execution. Upon returning from the safepoint, we hand control back to the Java program, and thus need the top frame to be safe for execution. Here, the stack-watermark barrier kicks in, and lets the garbage collector handle the top frame (and its caller, for practical reasons). The thread will scan the top frames and lower the watermark accordingly, and resume its own execution at the point where it left before the safepoint. Meanwhile, GC threads also start working to scan the stacks, from the bottom up to the watermark, i.e., in the safe zone. Whenever a thread executes something that would destroy a stack frame it does a few things:

The end result is that we will effectively scan all the same frames and references as we would have done at the initial mark pause, but we have done so concurrently, while the program is executing.

So what is the effect of those changes in practice? I have run a number of benchmarks measuring garbage collection pauses. The table below shows the average pause times over all benchmarks in JDK 11, JDK 16, and JDK 17. The difference between JDK 16 and JDK 17 shows the improvement that is achieved by concurrent stack processing. The difference to JDK 11 is shown for completeness and includes the various other improvements from previous releases.

How the JVM uses and allocates memory