How to design state machines for microservices 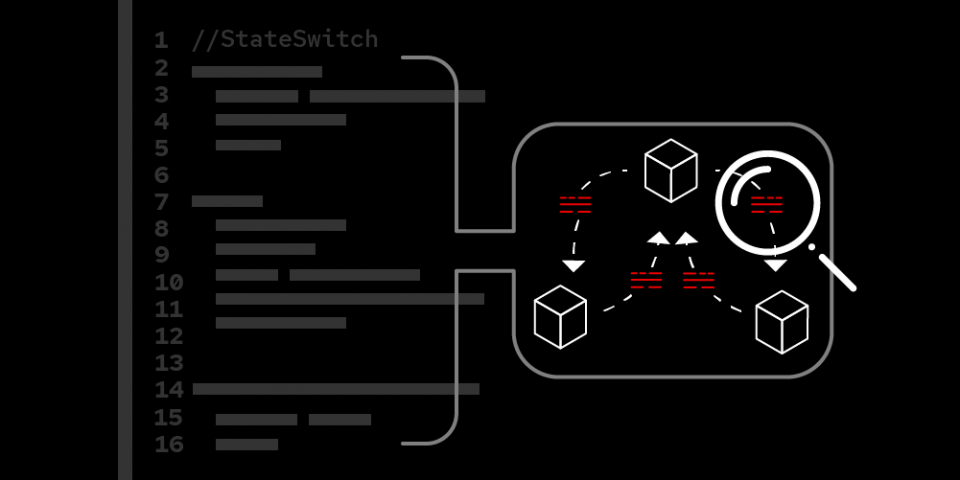 Backend services and microservices typically use state machines to maintain the state of their resources, whether the state machine is defined explicitly or not. To create a well-written service, you must expressly and clearly define its state machine, so that users know what to expect and can ensure that tests cover all possible (and impossible) transitions.

In this article, you'll learn important guidelines for building state machines. You'll also get an introduction to stateswitch, a Go library that you can use to organize a state machine's transition logic.

What is a state machine?

When we discuss state machines in this context, we refer to deterministic finite state machines, which are widely used in mathematics and computer sciences to model problems. State machines have a single start state and one or more accepting, or final, states. Transitions between the states describe the input or event required for moving from one state to another. When designing and developing services or micro-services, it is useful to model the resources that those services manage as state machines.

As an example, consider a state machine for a user subscription, as illustrated in Figure 1.

This example shows a few kinds of states and transitions. There is a start state, creating, and a final state, canceled. The backend handles the transition from creating to created once processing is complete, making creating an intermediate state. You should use intermediate states when a transition cannot occur within a single database transaction. This avoids races and indicates to users that an operation is in progress. Explicit user actions trigger the transitions to and from suspended and to canceled.

Visualizing a state machine, as we've done here, can help you determine whether it is robust. The example diagram in Figure 1 should raise some questions: Can a user cancel a suspended subscription, for instance? And is there an error state for subscriptions with an unrecoverable error?

Here are a few general points to keep in mind when designing state machines for microservices:

You should avoid using lengthy sequences of if-else statements to define transitions, as such code is prone to bugs. Instead, you can use stateswitch, a library written in Go, to organize the transition logic. With stateswitch, you define each transition by specifying the source states, a destination state, the condition upon which to transition, and a method to call upon transitioning.

As an example, consider the Red Hat OpenShift assisted installer. This service exposes REST and Kubernetes APIs that allow users to discover hosts, group them into OpenShift clusters, and monitor cluster installations. The service has state machines for host and cluster resources.

Use APIs to expose service states

A final point to consider is using APIs to expose states to users. In REST, it is natural to include the state in the resource's properties. The user sees a concise single-string value, and a user interface (UI) can easily display it. On the downside, the state's meaning might not be apparent to users who don't know how your state machine works. Another downside is that scripts might rely on the order of your state machine's transitions, such that even adding a state could represent a breaking API change.

You could represent the state properties in OpenAPI format as follows:

Users and scripts can precisely examine the conditions they are interested in without needing to understand the underlying state machine, and new states can be added without breaking the API. The downside is that the state is not expressed concisely, which can cause problems if it's displayed in a UI. Of course, conditions can be added to a REST API or a concise state added to a Kubernetes API.

State machines help engineers visualize a resource's behavior, find gaps or inconsistencies, organize code, and improve test coverage. They also allow users to understand the machine's behavior and know what to expect. In this article, you've learned important guidelines for implementing a state machine, and have seen how the stateswitch library can help.

Create a Kubernetes Operator in Golang to automatically manage a simple, stateful application

Behavior is easy, state is hard: Tame inconsistent state in your Java code