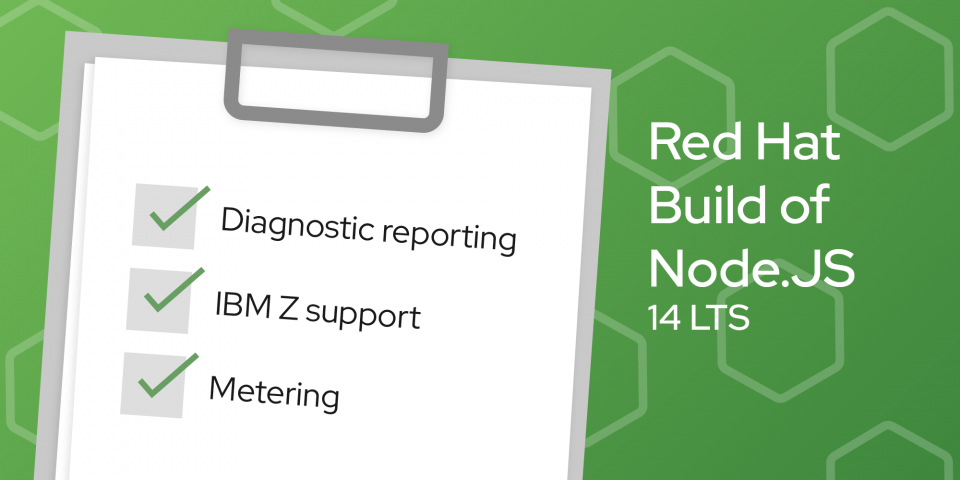 The latest Red Hat build of Node.js 14 long-term support (LTS) release. This build brings new features such as diagnostic reporting, full-icu internationalization support, and Red Hat OpenShift integration. We've also included tech preview features such as the new AsyncLocalStorage class, and we've updated our documentation and interactive developer learning scenarios. Keep reading for an overview of what's new and how to get started with the Red Hat build of Node.js 14.

Get started with the Red Hat build of Node.js 14

If you are using OpenShift, start by importing the latest nodejs-14 image. Assuming you are already logged in via the oc command-line interface (CLI), enter the following in your terminal:

Next, you might want to build a simple nodejs-sample-app in OpenShift, as follows:

You can use a Dockerfile to create your own image to package your application:

If you want to pull and use one or more Red Hat Enterprise Linux (RHEL) images, enter the following:

If you are running an application in production, you sometimes need to pull diagnostic data from it. Node.js uses first failure data capture (FFDC) technology to capture diagnostic data when the error occurs. As a developer, you can use diagnostic reports to analyze what's going on and troubleshoot the application landscape.

Previous releases required installing the Node.js reporting module separately. In the Red Hat build of Node.js 14, you can use the diagnostics reporting feature directly in your Node.js runtime. Here is an example of how to directly access diagnostic reports in this Node.js 14 build:

Here's an example of how to use the command line to dump reports:

You can generate diagnostic reports for anomalies such as performance issues, memory leaks, high CPU usage, and so on. Reports are in JSON format, making it easy to integrate the results into a broader reporting mechanism.

We've updated the V8 JavaScript engine to version 8.4 in this build. The engine contains new features such as optional chaining and API changes for improved localization support.

If you have ever tried to propagate contextual information (such as logging) to your asynchronous processes, you know it's tedious. There should be a simpler way to handle those internal processes. In this Red Hat build of Node.js 14, we offer the AsyncLocalStorage class as a technical preview feature. AsyncLocalStorage creates an asynchronous state in callbacks and promise chains, as shown in this example:

The asyncLocalStorage.run() method takes two arguments: The first one is the store state, which can be anything you want. In our example, we are using a customId(customer Id). The second argument is a function. Our state will be retrievable and isolated inside of that function. In this example, we've called next() inside the function to have every other Express.js middleware instance run within the AsyncLocalStorage context.

To support developers getting started with the Red Hat build of Node.js 14, we have updated the documentation and learning scenarios for this build.

We have updated the Node.js 14 release notes and API documentation for this release. We've also added a new Node.js runtime guide.

Note: See the release notes' section "Support for Node.js Runtime on IBM Z" for more information regarding the Red Hat build of Node.js 14 on OpenShift running on the s390x platform and IBM Z infrastructure.

You can use self-paced developer interactive learning scenarios to experiment with Node.js or learn about other Red Hat Runtimes technologies. Each scenario provides you with a pre-configured OpenShift instance accessible from your browser without any downloads or configuration. As shown in Figure 1, you can use the OpenShift instance to explore Node.js 14 and see how it helps you solve real-world problems.

The Red Hat Runtimes engineering team produced this release. Developing the Red Hat build of Node.js 14 involved many hours of development, testing, writing documentation, more testing, and working with the wider Red Hat community of customers, partners, and Node.js developers to incorporate both large and small contributions. We sincerely hope that this build meets or exceeds your expectations!