From code to production with OpenShift Pipelines and Argo CD 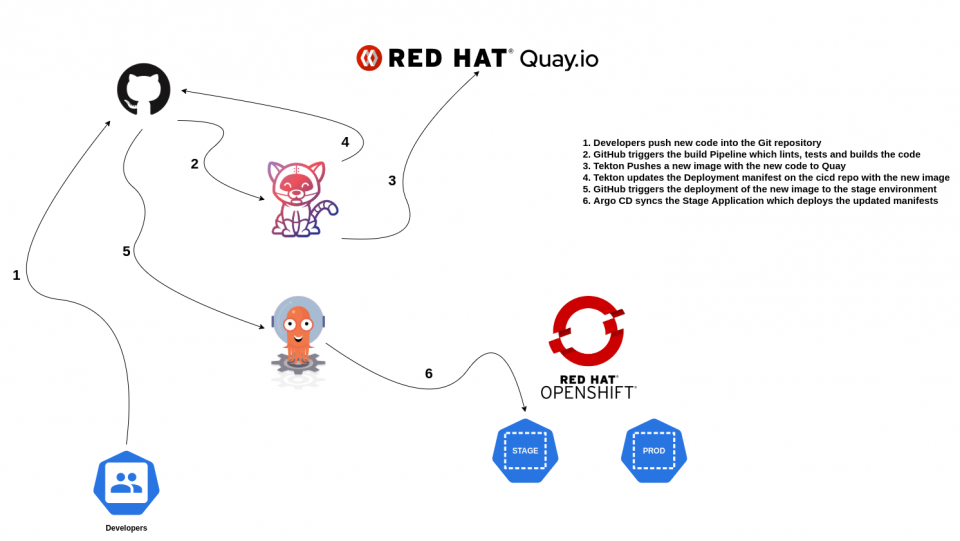 Our team is responsible for a small GoLang application. The application's developers are continuously sending code changes to the main branch, so for the past two years, our team has used GitOps for continuous integration (CI). We started out using GitOps to deploy applications to our test clusters; then, we began using it to run day two operations in our clusters.

From there, we chose Argo CD as our continuous deployment (CD) tool. When we started, it was the best fit for our workflows. It works perfectly as a GitOps tool, and it's easy to integrate with Red Hat OpenShift.

When OpenShift Pipelines was released, we decided to try it because our applications would benefit from an automated CI pipeline. We started creating pipelines to automatically build our apps whenever a new commit hit the main branch. Once we had enough experience with these tools, we considered automating our CI and CD workflows so we wouldn't need to worry about anything but writing code.

This article includes a demonstration of our CI/CD pipeline, and shows you how to set up a demonstration environment so that you can run the example application detailed below on your own. I'll also show you two videos of the build and production pipelines in action.

Set up your demo environment

To follow the examples in this article, will need the following installed in your development environment:

First, here's a quick introduction to Argo CD and OpenShift Pipelines. Argo CD is a tool for doing GitOps continuous delivery on Kubernetes in a declarative way. You can learn more about GitOps here.

OpenShift Pipelines is a CI/CD solution based on Tekton. It adds onto Tekton's building blocks and provides a CI/CD experience through tight integration with OpenShift. You can learn more Tekton here.

We want every new commit to the main branch to be linted, tested, built, and deployed in our staging environment, without manual intervention. So, the example application features a continuous integration pipeline that is in charge of linting, testing, and building the code. Argo CD manages continuous deployment and is configured to deploy the application to the staging and production environments.

We use webhooks in Git to automatically trigger pipelines and deployments when new commits hit specific branches in our repositories.

We have two different pipelines: One that builds the code and deploys to staging, and one that promotes staging builds to production. Before we talk about the pipelines, let's review the two Git repositories that we will be using:

Figure 1 illustrates the workflow for the build pipeline.

Figure 2 shows the workflow for the promotion pipeline.

Let's take a look at the two pipelines we configured in our OpenShift cluster. Figure 3 shows the build pipeline. 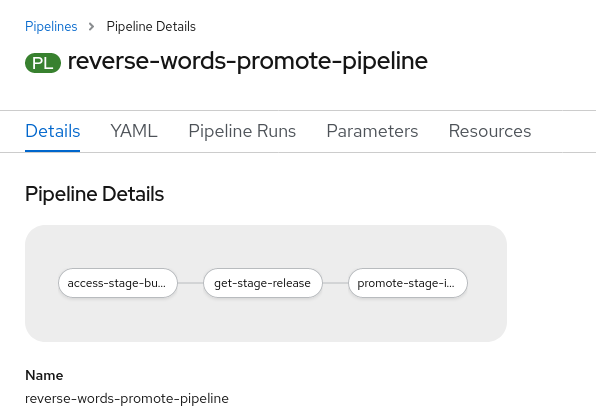 We already created the Argo CD applications, so let's take a look at those next. First is the staging application, shown in Figure 5.

Next is the production application, shown in Figure 6.

See the demo app in action

All of this is shown in the "Build Pipeline" video.

You can start using Tekton and Argo CD today. If you don't know where to begin, we have a few Katacoda scenarios that you can try:

If you want to run the demo from this article in your own environment, you will find everything you need in the demo repository. And if you already have experience with using Tekton, we encourage you to have a look at the Tekton Hub. You can use the hub to contribute your tasks and pipelines so that the community can benefit from them.