The developer experience in the Red Hat OpenShift Container Platform web console keeps getting better. You’ve probably already heard about our streamlined user flows to build and deploy applications, plus the ability to understand the structure of your application via the Topology view. Each new release of Red Hat OpenShift includes usability improvements and new features to help developers reach their goals.

In OpenShift 4.4, we focused on making application deployment easier through the Developer Catalog, improving the experience of Operator-backed services, and supporting Helm Charts. As for feature updates, we:

Let’s take a closer look at what’s different for the developer in OpenShift 4.4.

Application deployment is even easier

Application deployment should be easy, right? We think so, too, so here are some of the improvements that were released with 4.4:

The Topology view has significant usability improvements and new flows supported in 4.4. If you prefer a more streamlined layout in Topology, you can collapse grouping types. The developer can collapse all application groupings, Operator Groupings, Knative Services, or Helm Releases from the Display dropdown menu, as shown in Figures 4 and 5. This feature helps the developer hide some of the complexity of their application and focus on individual pieces. 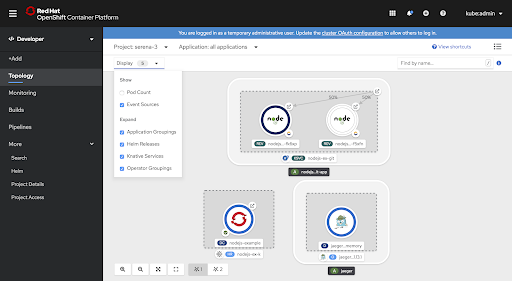 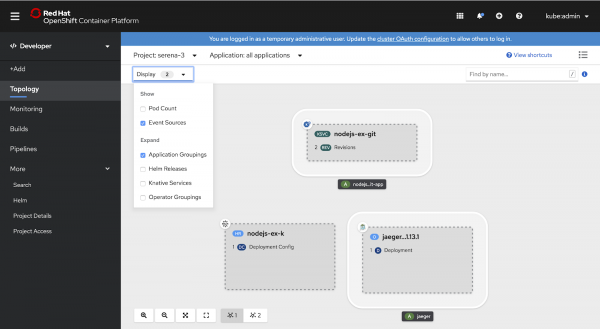 Also, developers can easily locate components in a busy application structure with the new find feature, which highlights components based on a string match on the name, as shown in Figure 6. This feature increases the discoverability of a component. 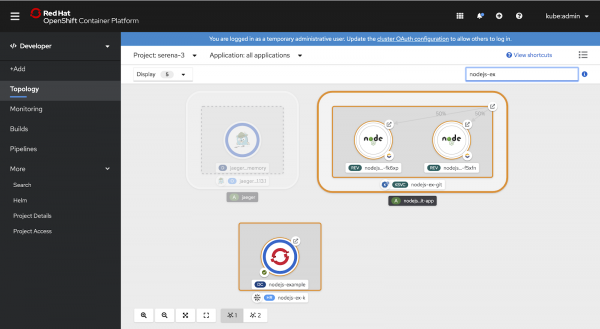 Getting insights into your application

The Developer perspective has a new Monitoring experience, which allows the developer to troubleshoot problems with their application. These features are Tech Previews.

You can get insights into your application metrics with your new monitoring dashboard featuring 10 metrics charts. This Tech Preview feature is available on the Dashboard tab of the Monitoring page, as shown in Figure 7. 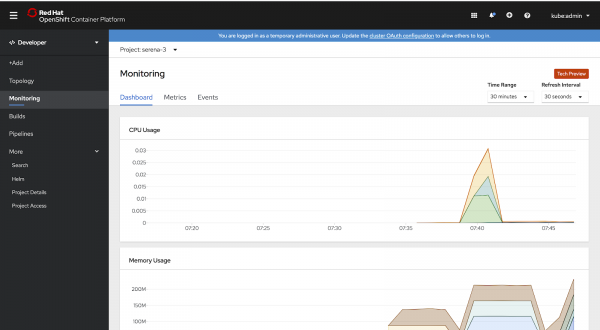 The Metrics page, available in the Monitoring section, has also been improved. Not all developers know PromQL. So we added a number of out-of-the-box queries while retaining the ability to run Prometheus Query Language (PromQL) queries on your project, as shown in Figure 8. 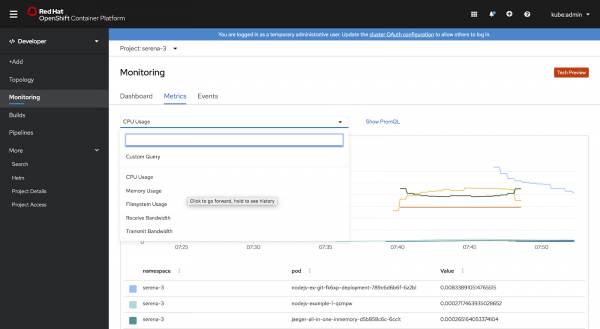 Figure 8: Out of the box queries
Figure 8: The Monitoring Metrics tab.">

Learn more about the new monitoring experience for developers here.

Among other Pipelines enhancements, OpenShift 4.4 introduces the Pipeline Builder to the developer experience. It provides developers a visually guided experience to build their own pipelines, as you can see in Figure 9. 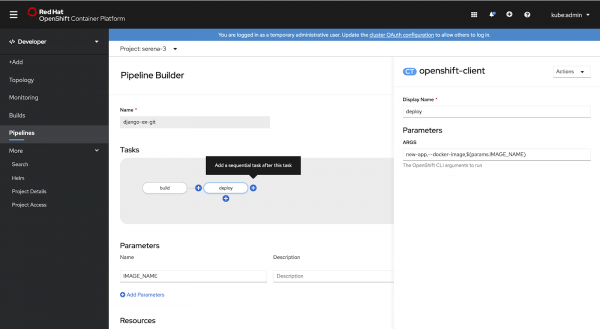 OpenShift Serverless is now generally available. We’ve also made improvements to the experience around serverless, as you can see in Figure 10, some of which address feedback we’ve received from the community and customers.

For more details on these improvements, check out Serverless applications made faster and simpler with OpenShift Serverless GA.

OpenShift 4.4 marks the third release of the new console developer experience. Community and customer collaboration and feedback is a huge part of our process. We’d love to hear from you. Consider attending one of our office hours or share your thoughts here to let us know how we are doing and provide feedback on the developer experience in the OpenShift Web Console.

Also, join our OpenShift Developer Experience Google Group to participate in discussions and learn about our Office Hours session where you can collaborate with us and provide feedback.

Interested in learning more about application development with OpenShift? Here are some Red Hat resources which might be helpful: