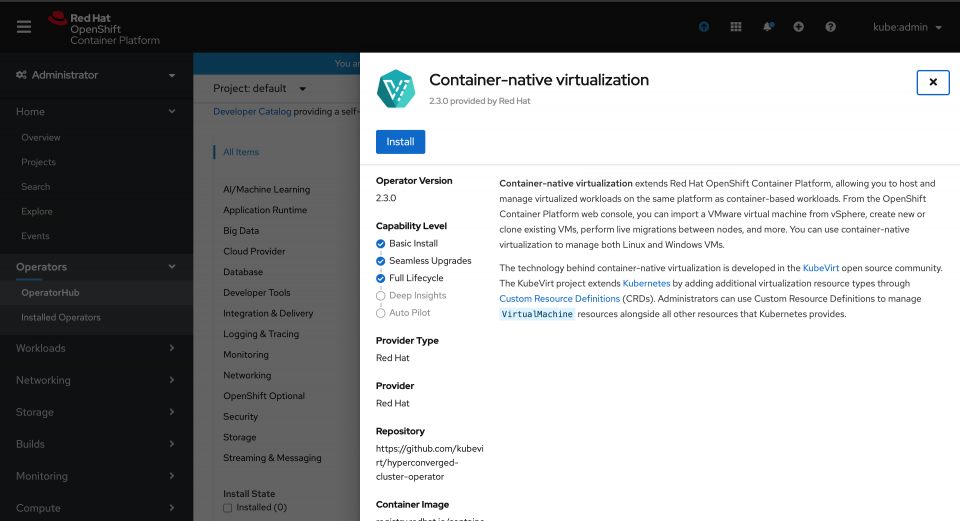 Based on the open source project KubeVirt, OpenShift Virtualization's goal is to help enterprises move from a VM-based infrastructure to a Kubernetes and container-based stack, one application at a time. This means that we must be able to treat applications based on traditional VM-based workflows just like we do native Kubernetes applications, including for management and routing. At the same time, many of these applications require a significant amount of VM-native configuration to function. 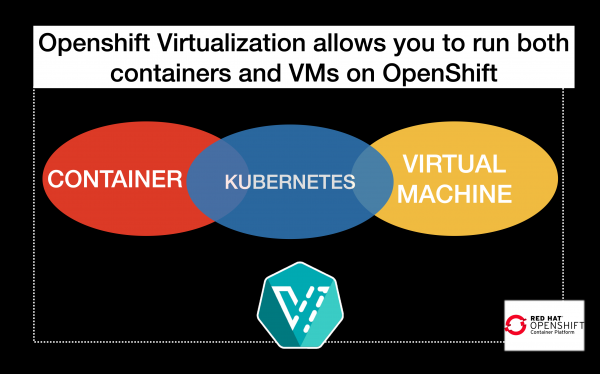 I used the following technologies for this demo:

Warning:  OpenShift Virtualization is fully, but only supported on-prem, on bare metal on x86. We currently do not support public cloud deployments in any case. Red Hat has this on our roadmap, however.  While TCG emulation mode should technically work, it is not supported and is not a recommended deployment. Again, those wishing to experiment are free to do so, but the resulting deployment is currently not encouraged or supported by Red Hat.

With these caveats in mind, let's enable OpenShift Virtualization on Red Hat OpenShift 4.4. 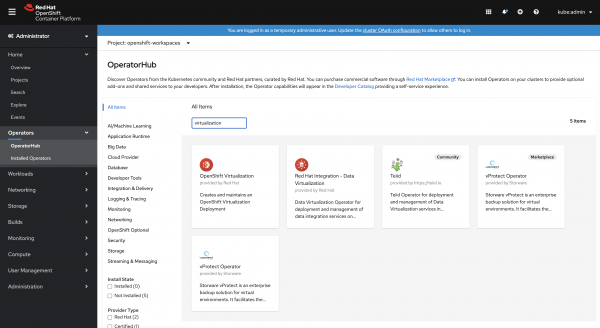 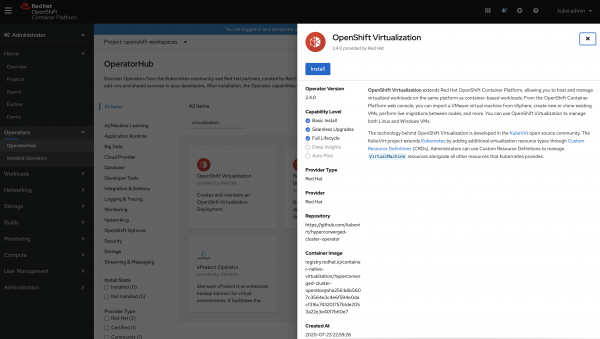 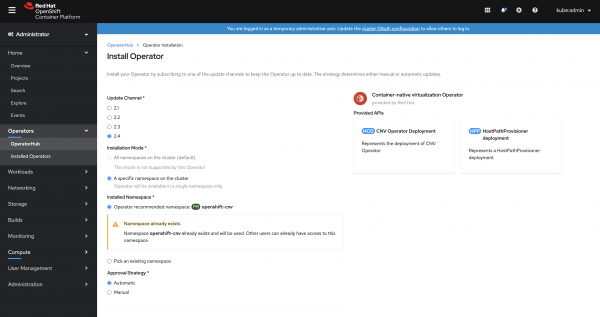 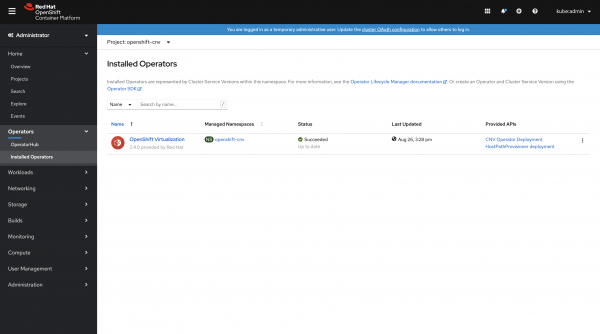 Some Kubernetes and OpenShift Operators, like Red Hat CodeReady Workspaces, do not immediately initiate deployment. The OpenShift Virtualization Operator begins deploying pods immediately after you complete the Operator subscription. Checking for Workloads --> Pods is a good way to confirm the successful subscription before moving on, as shown in Figure 6.

In this step, we will install a hyperconverged cluster. Paraphrasing from Wikipedia:

Hyperconverged clusters include a hypervisor for virtualized computing, software-defined storage, and virtualized networking, and they typically run on standard, off-the-shelf servers. 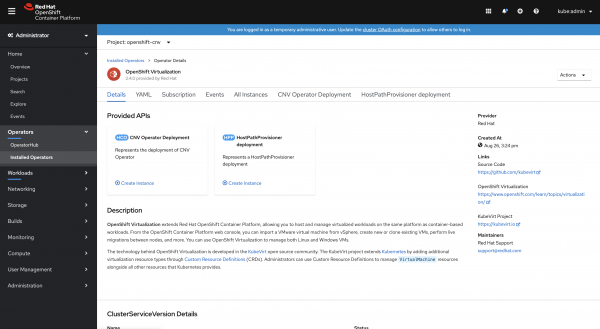 As displayed in Figure 8, there is only one option on this screen, so go ahead and click the Create HyperConverged Cluster button. 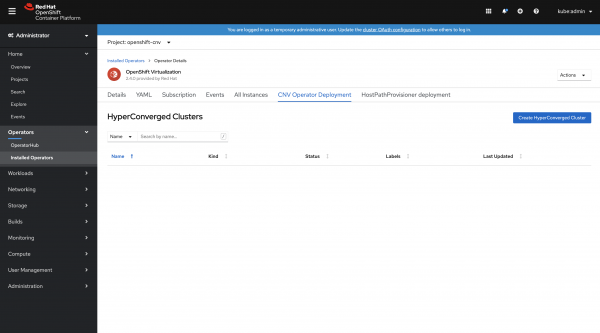 Next, you will see the custom resource definition (CRD) file for a HyperConverged cluster. The CRD extends the API with the custom resource concept. It is a stable object that developers can use to create custom controllers and Operators. For a project like OpenShift Virtualization, which is based on KubeVirt, a CRD is an interface for instructing VMs to run on the Kubernetes platform.

As shown in Figure 9, ensure that the file name is kubevirt-hyperconverged, then click Create to continue.

Creating the CRD essentially installs the HyperConverged cluster. That's not so bad, is it? We can now check our pods again to make sure that everything is deployed correctly, with no hiccups. 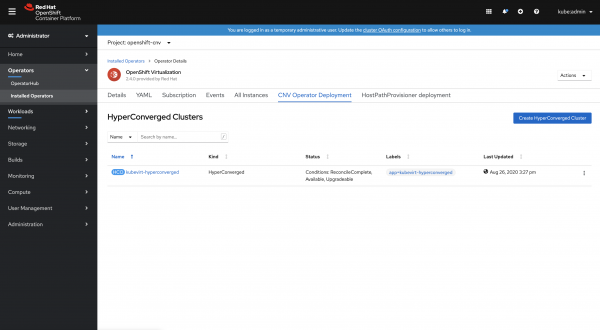 When you check your pods, be sure to monitor any issues that might have come up after the HyperConverged cluster installation. If you see any issues—such as pods stuck in the pending state, showing an Err Image Pull status, and so on—you can go inside the troubled pod and look at its events and logs to discover the possible cause of the problem. If there is no problem, your OpenShift Virtualization installation is done.

Under Workloads, click virtual machines. This brings up a screen where you only see one option right now, which is the Create Virtual Machine button. Clicking that button leads to a drop-down list where you are given three options: New with Wizard, Import with Wizard, and New from YAML. Select the New with Wizard option, as shown in Figure 12.

Hooray! You see a nice wizard interface where you can create your VM within OpenShift, as shown in Figure 13.

I'll introduce what you can do with Openshift Virtualization in another article soon.

In a CentOS- or Red Hat Enterprise Linux (RHEL)-based environment, you can easily use the subscription manager to install virtctl:

Use one of these options for the repository:

Installing virtctl on other platforms

What if you are using an operating system other than RHEL, like macOS, Windows, or another Linux platform? In that case, you can download virtctl and run it as an executable.

To start, locate the version of virtctl that you need from the GitHub release repository, which is shown in Figure 14.

If you have a tool like wget or curl, use the following commands to make the downloaded package executable:

I am using a MacBook Pro, so I decided to download virtctl manually. Once I downloaded it, I renamed the file to virtctl and placed it under a designated directory, as shown in Figure 15.

You can make the downloaded file executable by entering the command: chmod +x ./virtctl.

After that, grab the path and export it in ~/.bashrc, as shown in Figure 16. Once you've done that, virtctl will be available everywhere by just typing virtctl.

Figure 17 shows what happens when I enter the ~/.bashrc command followed by virtctl:

Type virtctl to execute it