GraalVM allows you to compile a program ahead of time into a native executable. The resulting program does not run on the Java HotSpot VM, but instead uses necessary components such as memory management and thread scheduling from a different implementation of a virtual machine called Substrate VM. Substrate VM is written in Java and compiled into the native executable. The resulting program has faster startup time and less runtime memory overhead compared to a Java VM. (This definition is referenced from the Graal website).

This article compares the following metrics:

This project uses the following tools:

This improvement warrants using the Graal native image for applications that need fast startup times, for example, serverless architectures and containers. However, the native compilation has some specific restrictions, especially around the use of reflection and dynamic class loading. This makes it harder (at least for now) to move all applications to native binaries, but with every release of Graal, compatibility is improving. 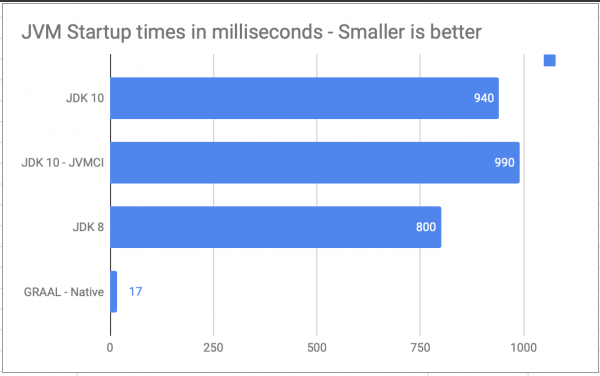 To run the application locally, do the following:

The full binary of the application is made available via the following command. Make sure that Graal is available on your local machine.

The startup time is measured with the new JVM compiler interface (JVMCI) options available from JDK 9. The measured time reported here is recorded with the following JVM flags:

Note that no measurements have been captured via ahead-of-time compilation (AOTC), and it would be interesting to see what changes AOTC brings to the mix.

The Docker image for the natively compiled artifact is less than half the size of the container with the JRE. Native compilation provides great savings in the Docker image size, and this could be a big win for container environments such as Kubernetes. 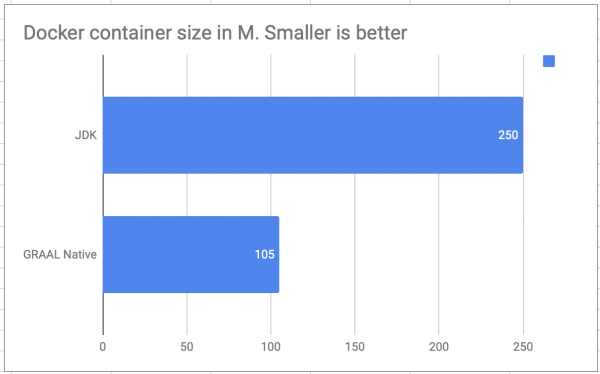 The fedora-minimal base image is being used as the runtime for the JVM and native images. The sizes shown in the metrics above are the from SIZE column of the docker images command.

All Docker files are available in the source repository. Build the images using following commands: 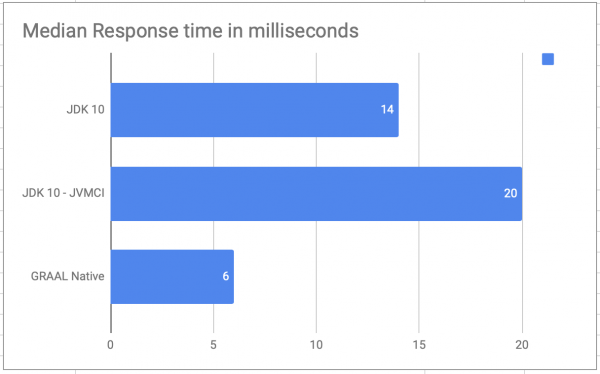 Vegeta, an HTTP load testing tool, is used to put a load on the application for 60 seconds.

The test used vegeta with the following parameters:

Everything is running on a laptop with an Intel Core i7 processor and 16GB of RAM. MongoDB is also running locally and no tuning has been performed on any specific parameter.

Serverless architectures can benefit from faster startup times. The configuration demonstrated in this article shows how GraalVM can reduce startup time and Docker image size for Java-based programs.

For your Java applications that are hosted on container platforms such as Red Hat OpenShift, try natively compiling them using GraalVM and its AOTC capability to see how they can benefit from faster Java startup time and a smaller Docker image size.