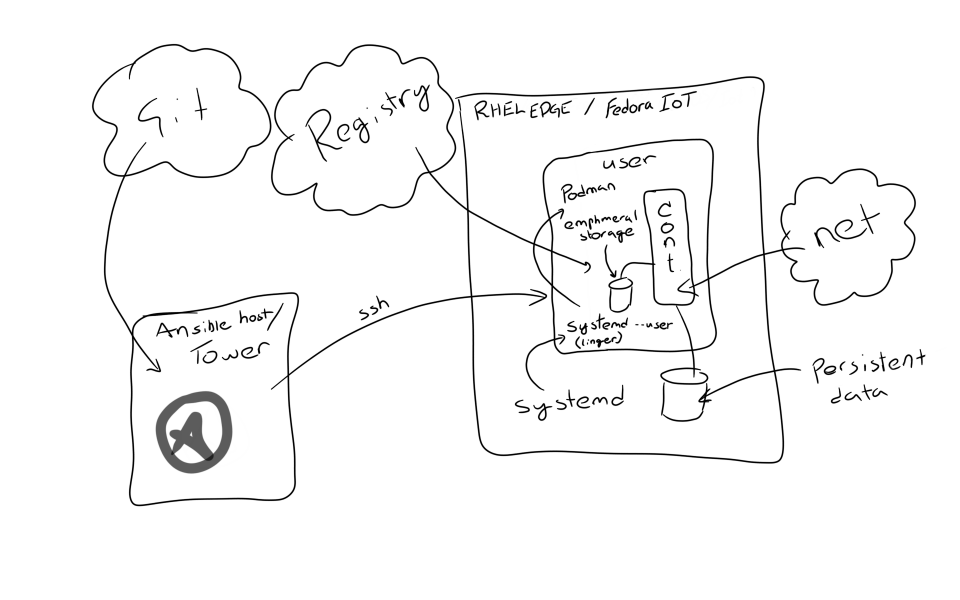 Applications are often developed, tested, and delivered in containers, and Red Hat OpenShift is a great platform for that purpose. Sometimes, however, the target machine is much smaller than a Kubernetes cluster. It might be an embedded server, industry PC hardware, or a single server.

In this article, you'll learn how to use systemd, Podman, and Red Hat Ansible Automation to automate and push software as containers to small-scale edge and Internet-of-Things (IoT) gateway devices.

Note: While I have not included Red Hat Ansible Tower in the demonstration, integrating it would be the next logical next step.

Why should you use rootless containers to deliver applications to edge and IoT boxes? Well, it's another layer of security. Even if an evil blackhat manages to break into your container, find a security hole, and punch through your Security-Enhanced Linux (SELinux) module, the rootless container ensures they won't have privileges in the system.

As a developer, you also don’t necessarily need root privileges in the target device. Your team could deliver the application to end devices as containers, while only admins have the privileges to manage the boxes.

Set up the development environment

I’ve previously written about automating Podman containers with Ansible, but I've only recently added the rootless option to my Ansible role. We’ll use the updated Ansible role and an Ansible module for Grafana for this demonstration.

We'll set up Grafana with a dummy dashboard and test users for an RHEL edge server to get started. I have tested the example also on a Fedora IoT distribution and a standard RHEL server.

Our end goal is to create persistent containers using systemd, Podman, and Ansible Tower, where the containers have user-only privileges. In this case, systemd manages the user processes, but any Docker container would work the same. Figure 1 shows how these components would work together.

In the next sections, we'll set up and configure this automation.

First, let's look at what needs to change to make the podman_container_systemd role work in user mode. We'll also look at the changes needed for Fedora CoreOS and similar servers that are intended to run only containers.

The first thing we'll do is move all of the service files into the user's home directory instead of the /etc/systemd/system or /usr/lib/systemd/system system config directories. We could technically use the /usr/lib/systemd/userdirectory, but we want the service files to be private to the user. This way, anyone on the application team can modify them as a regular user if needed.

Here’s the configuration code for this step:

The biggest hurdle for me was understanding how a service user gets a D-BUS session, which remains available over boots even if the user never logs in. Additionally, systemd must be able to control the user's Podman session. We can handle these requirements by setting up a lingering session for the user, which activates dbus for a given user at boot. Here's how to set up the lingering session:

Next, we need to ensure that the systemd commands are executed in user scope. Because we don’t log in as the target user, but as a privileged Ansible user, we will set an environment variable for xdg_runtime_dir. We can use this variable to find the user’s lingering dbus session later. Here is how to set systemd's scope to user:

We've set all the required variables. Next, we need to tell Ansible to use the D-BUS session:

Note that we switch to a given user and set the runtime directory to catch the D-BUS. Also, the scope is set to user instead of system.

For my own purposes, I want to run these containers in minimal, Fedora CoreOS-based machines. Strangely, Ansible doesn’t have a proper package module for this setup. So, I used the following workaround for checking and installing packages:

You might not want to install anything there, but this configuration handles the required reboot if you do. It made sense for using Fedora CoreOS in an IoT system.

At this point, we are pretty much done with the changes.

In case you want to try this yourself (and why wouldn’t you?), I will share the commands to run this example in your own environment. I used RHEL 8 on my laptop and an RHEL edge server as the target virtual machine. If you don't have access to RHEL edge, you can also use Feroda-IoT as the target.

Then, install the role and collection dependencies:

And run the playbook:

You will need to change the following settings for your system:

Debugging locally in the target

We are running the containers as a user, and this Ansible role places them under the user context of systemd.  To use systemd as a given user,  you need to set up a D-BUS-related environment variable. However, the user does not have login credentials, so you need to switch manually to the user using su. (Note that sudo won't work because the original user ID would show your ssh user ID.)

Here's the command to switch manually to the user:

After setting XDG_RUNTIME_DIR you will be able to use the systemd --user or journalctl --user commands to investigate your systemd services set for the container:

You've seen how automating rootless Podman containers using Ansible works; now it’s time to clean it all up. Beware that the “nuke=true” option removes both the Grafana user and the data. Before using this option, make sure you've stored any data you don't want to lose. Note, again, that you need to remove the pkg_mgr if you are not working on an RHEL edge target:

Podman and systemd work well for running containers in small setups where Kubernetes would be overkill. Ansible is a robust way to create such a setup. Sometimes, as I've shown here, you don’t even need backups because the target is super easy for Ansible to create from scratch, including the application installation and configurations. It also doesn't matter if you have one or thousands of machines at the edge; the setup is basically the same. Remember how we configured Grafana over the API and config file? Consider which is better for your application.

By the way, how about updating the application at the edge? In my example, I set up a Podman container tag to periodically poll for new versions of the container. If you enable that service, you only need to push a new version of the container to the registry at the end of a successful CI/CD pipeline in Red Hat OpenShift. Happy containerizing!

See the following to learn more about Podman and systemd: