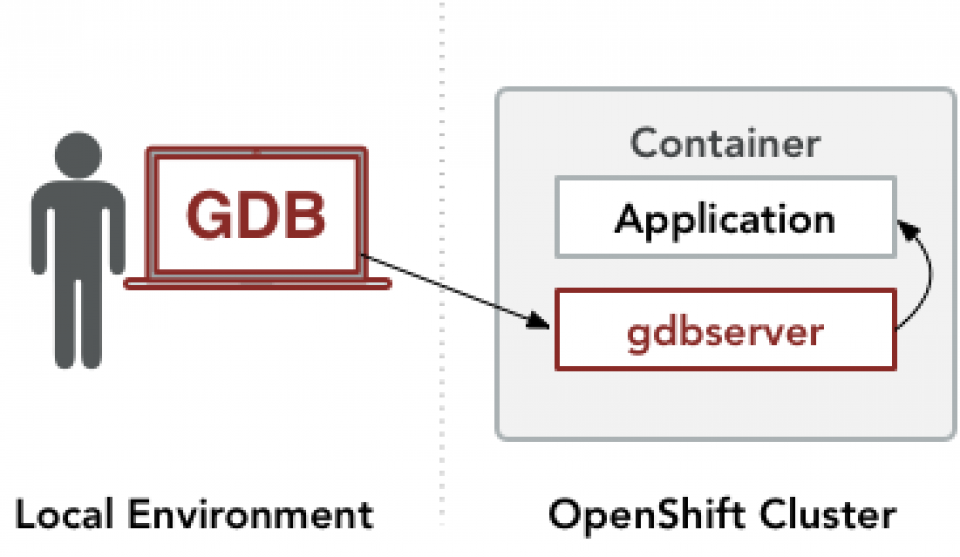 When debugging an application within a Red Hat OpenShift container, it is important to keep in mind that the Linux environment within the container is subject to various constraints. Because of these constraints, the full functionality of debugging tools might not be available:

To successfully debug a containerized application, it is necessary to understand these constraints and how they determine which debugging tools can be used.

The general-purpose Red Hat Enterprise Linux container base images include the gdbserver component of the commonly-used GDB debugger. Gdbserver can be used by configuring an interactive GDB session that runs outside the OpenShift cluster to pass remote commands to a gdbserver instance within a container. This gdbserver instance has direct access to the containerized application. In response to remote commands from the GDB session, gdbserver will collect information from the application and pass it back to the GDB session: The following debugging session illustrates how gdbserver can be attached to a program in a container based on the Red Hat Universal Base Image (UBI). The commands in this session should also work with containers based on earlier Red Hat Enterprise Linux container base images. This procedure was tested on an OpenShift 4.2.8 cluster managed with CodeReady Containers 1.2.0.

We begin the session by creating a container:

Obtain the name of the container with the oc get pods operation:

To verify that the container includes the gdbserver package, use the oc exec operation to execute an rpm command within the container:

We need the process ID of the program we want to debug. To obtain it, execute a ps command within the container:

Next, launch a local GDB session and connect to gdbserver within the container:

Next, instruct GDB to attach to the main server process in the container, which is identified by the process ID we obtained earlier:

At this point, GDB is ready to debug the process.

In a Red Hat OpenShift container, certain GDB functionality could be unavailable depending on how the container is configured.

For example, GDB functions that depend on access to debug information will be unavailable. Although debug information packages are available in many Linux distributions, including Red Hat Enterprise Linux, these packages can only be included in a container image ahead of time, and cannot be installed in an unprivileged container once that container is already running.

Nevertheless, there is a subset of GDB’s functions which can be used in the absence of debug information:

The following example shows how the command thread apply all bt can be used to obtain a stack trace of each thread in a process:

Secondly, GDB functions that require stopping the application are incompatible with periodic health checks. If a container has been configured to run periodic health checks, the OpenShift infrastructure will periodically send a message to the containerized application to verify that it is running. If the application has been paused by GDB, it will fail to respond to the message and OpenShift will restart the container on the assumption that the application has crashed. This restart will interrupt the debugging session and reset the application state. In this situation, it is not feasible to pause the program for an extended period of time. For such situations, GDB supports background execution and dynamic tracing. GDB’s background execution commands, such as attach&, allow GDB to attach to a program without pausing it. GDB’s tracepoint facilities can collect data while the program continues running.

There are debugging tools that can be used within containers but are not preinstalled in container base images. Tools such as strace or Valgrind must be included in a container during the container image build process.

A debugging tool cannot operate within an OpenShift container if the container does not have the privileges to access the operating system functionality required by the tool. For example, the SystemTap default kernel module backend cannot operate in containers that lack the privileges to load kernel modules. Similarly, perf requires access to the kernel perf_events interface, and bcc requires access to BPF tracing functionality. These functions are not available within unprivileged OpenShift containers. In general, a debugging tool that requires elevated privileges can only be used within a privileged container created by a cluster administrator.

This article gave a summary of various options for debugging a containerized application on OpenShift. Currently, in order to troubleshoot a running OpenShift application, it is necessary to anticipate the set of debugging tools that might be required, and steps must be taken ahead of time to ensure that these debugging tools will be present within the container.