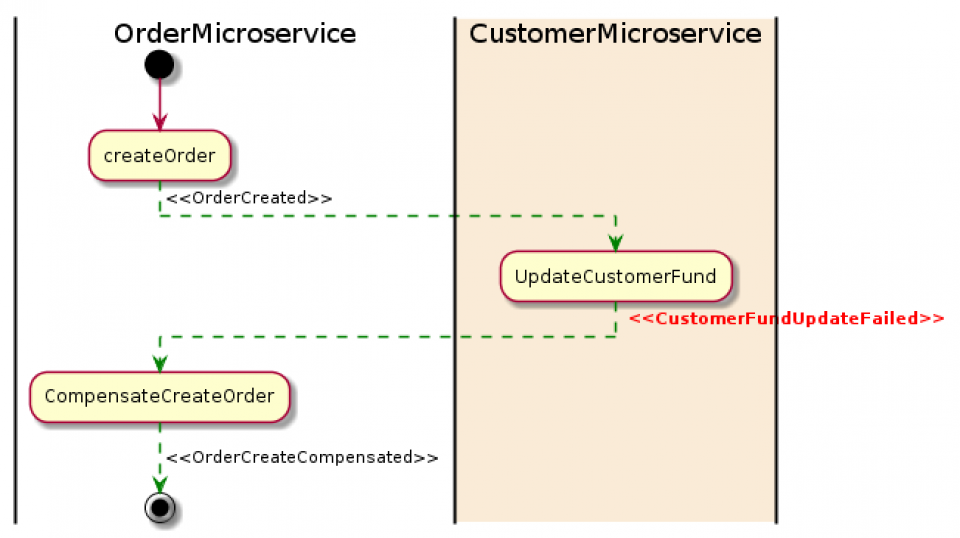 Microservices architecture has become very popular. However, one common problem is how to manage distributed transactions across multiple microservices. In this post, I will share my experience from past projects and explain the problem and possible patterns that could solve it.

What is a distributed transaction?

Here is a customer order example with a monolithic system using a local transaction: In the customer order example above, if a user sends a Put Orderaction to a monolithic system, the system will create a local database transaction that works over multiple database tables. If any step fails, the transaction can roll back. This is known as ACID (Atomicity, Consistency, Isolation, Durability), which is guaranteed by the database system.

When we decompose this system, we created both the CustomerMicroserviceand the OrderMicroservice, which have separate databases. Here is a customer order example with microservices: When a Put Order request comes from the user, both microservices will be called to apply changes into their own database. Because the transaction is now across multiple databases, it is now considered a distributed transaction.

What is the problem?

In a monolithic system, we have a database system to ensure ACIDity. We now need to clarify the following key problems.

How do we keep the transaction atomic?

In a database system, atomicity means that in a transaction either all steps complete or no steps complete. The microservice-based system does not have a global transaction coordinator by default. In the example above, if the CreateOrder method fails, how do we roll back the changes we applied by the CustomerMicroservice?

Do we isolate user actions for concurrent requests?

If an object is written by a transaction and at the same time (before the transaction ends), it is read by another request, should the object return old data or updated data? In the example above, once UpdateCustomerFund succeeds but is still waiting for a response from CreateOrder, should requests for the current customer's fund return the updated amount or not?

The problems above are important for microservice-based systems. Otherwise, there is no way to tell if a transaction has completed successfully. The following two patterns can resolve the problem:

2pc is widely used in database systems. For some situations, you can use 2pc for microservices. Just be careful; not all situations suit 2pc and, in fact, 2pc is considered impractical within a microservice architecture (explained below).

What is a two-phase commit?

Normally, there needs to be a global coordinator to maintain the lifecycle of the transaction, and the coordinator will need to call the microservices in the prepare and commit phases.

Here is a 2pc implementation for the customer order example: If at any point a single microservice fails to prepare, the Coordinator will abort the transaction and begin the rollback process. Here is a diagram of a 2pc rollback for the customer order example: 2pc is a very strong consistency protocol. First, the prepare and commit phases guarantee that the transaction is atomic. The transaction will end with either all microservices returning successfully or all microservices have nothing changed.  Secondly, 2pc allows read-write isolation. This means the changes on a field are not visible until the coordinator commits the changes.

While 2pc has solved the problem, it is not really recommended for many microservice-based systems because 2pc is synchronous (blocking). The protocol will need to lock the object that will be changed before the transaction completes. In the example above, if a customer places an order, the "fund" field will be locked for the customer. This prevents the customer from applying new orders. This makes sense because if a "prepared" object changed after it claims it is "prepared," then the commit phase could possibly not work.

This is not good. In a database system, transactions tend to be fast—normally within 50 ms. However, microservices have long delays with RPC calls, especially when integrating with external services such as a payment service. The lock could become a system performance bottleneck. Also, it is possible to have two transactions mutually lock each other (deadlock) when each transaction requests a lock on a resource the other requires.

Here is a diagram of the Saga pattern for the customer order example: In the example above, the OrderMicroservice receives a request to place an order. It first starts a local transaction to create an order and then emits an OrderCreated event. The CustomerMicroservice listens for this event and updates a customer fund once the event is received. If a deduction is successfully made from a fund, a CustomerFundUpdated event will then be emitted, which in this example means the end of the transaction. In the above example, the UpdateCustomerFund failed for some reason and it then emitted a CustomerFundUpdateFailed event. The OrderMicroservice listens for the event and start its compensation transaction to revert the order that was created.

Advantages of the Saga pattern

One big advantage of the Saga pattern is its support for long-lived transactions. Because each microservice focuses only on its own local atomic transaction, other microservices are not blocked if a microservice is running for a long time. This also allows transactions to continue waiting for user input. Also, because all local transactions are happening in parallel, there is no lock on any object.

Disadvantages of the Saga pattern

The Saga pattern is difficult to debug, especially when many microservices are involved. Also, the event messages could become difficult to maintain if the system gets complex. Another disadvantage of the Saga pattern is it does not have read isolation. For example, the customer could see the order being created, but in the next second, the order is removed due to a compensation transaction.

To address the complexity issue of the Saga pattern, it is quite normal to add a process manager as an orchestrator. The process manager is responsible for listening to events and triggering endpoints.

The Saga pattern is a preferable way of solving distributed transaction problems for a microservice-based architecture. However, it also introduces a new set of problems, such as how to atomically update the database and emit an event.

Adoption of the Saga pattern requires a change in mindset for both development and testing. It could be a challenge for a team unfamiliar with this pattern. There are many variants that simplify its implementation. Therefore, it is important to choose the proper way to implement it for a project.

The disadvantages vs. benefits of microservices

A microservices architecture enables you build truly scalable, adaptive, complex systems that help a business adapt to rapidly changing competitive markets. Get a hands-on introduction to frameworks and containers through a handful of familiar patterns with Microservices for Java Developers.