As the industry heads toward the Trough of Disillusionment with cloud-native microservices, finally understanding that distributed architectures introduce more complexity (weird, right?), services meshes can help soften the landing and shift some of that complexity out of our applications and place it where it belongs, in the application operational layer.

At Red Hat we are committed to (and actively involved in) the upstream Istio project and working to integrate it into Kubernetes and Red Hat OpenShift to bring the benefits of a service mesh to our customers and the wider communities involved. If you want to play with Istio, check out the Service Mesh Tutorials on learn.Openshift.com. If you want to install it, follow the Istio Kubernetes quickstart instructions and install it on Red Hat OpenShift 3.7 or later (or 3.9 if you want to use auto-injection).

Existing Apps as a Service Mesh 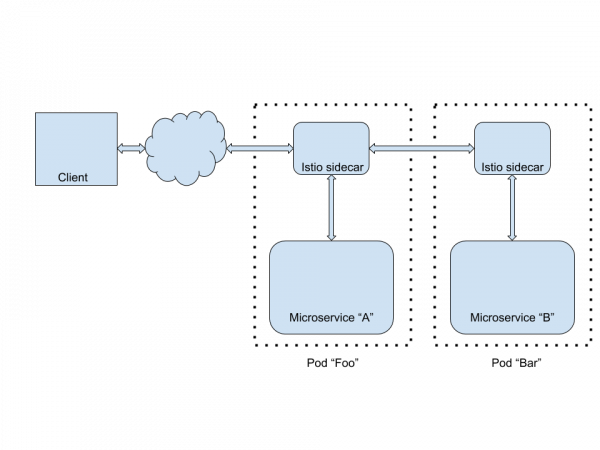 You may have seen the new Coolstore microservices demo floating around the Red Hat ecosystem in the last year; it's a fantastic tool for demonstrating the unique value that Red Hat brings to modern apps, and showcases key use cases around modern application development and integration using the Red Hat stack. Wouldn't it be great if we could deploy existing apps like Coolstore as a service mesh using Istio and Red Hat OpenShift? After all, one of the Goals of Istio is that it transparently brings new value to existing apps without them even knowing about it. It can reduce or eliminate the need for a lot of boilerplate code in the apps themselves for dealing with retries, circuit breakers, TLS, etc.

And make sure you are logged in as a cluster administrator, or have cluster-admin privileges since it will require you to make some policy and permission changes later on.

With sidecar auto-injection, your app's pods are automatically festooned with Envoy proxies without even having to change the application's Deployments. This relies on Kubernetes' MutatingAdmissionWebhook, new in Kubernetes 1.9 (and therefore Red Hat OpenShift 3.9). To enable this in Red Hat OpenShift, you'll need to edit your master's config file (master-config.yaml) to add the MutatingAdmissionWebhook:

And also enable the Kubernetes Certificate Signing API in order to use Kubernetes to sign the webhook cert (part of the automatic sidecar injection installation process):

With those changes, restart your master and then follow the automatic sidecar injection installation process.

Note that Red Hat OpenShift has a much more restricted set of default security policies compared to out of the box Kubernetes, so you'll have to allow the injector webhook to run with elevated permissions, as it will try to bind to port 443 in its pod. The Istio project is aware of the complaints about it needing too much privilege, and is working to apply the principal of least privilege:

Then restart the injector webhook pod. When new pods are created to run application containers, the MutatingAdmissionWebhook will be consulted and given a chance to change the pod's contents. It will add the necessary "sidecar" containers to transparently intercept all network traffic and all inbound/outbound application traffic.

Next, let's create a test project to house a sample application. Give permissions to the proxy containers to allow them to do the magic, and to run with privileged users so we can rsh into it later:

To enable auto-injection on a Red Hat OpenShift project, you simply label the project (aka namespace):

From then on, any pods created within that project will get an additional container injected into it. Let's test it out real quick by creating a test pod running a basic Apache HTTPD server:

And check out the pods:

See that 1/2 under the READY column? It says 1 of 2 containers is ready.  The 2 containers are: the one that executes the deployment; and the one for the auto-injected sidecar. It's always been possible to have multiple containers in a pod, but to date, it has not been widely seen in the wild. Assumptions have been baked into various developer tools which will need revisions to be able to smoothly operate in an istio-ified universe.

This is due to a bug in Istio/Envoy. As a workaround, let's hack it to add some sleep time to allow the sidecar proxy extra time to initialize before the _actual_ deployment occurs:

Ordinarily, when you patch the deployment it would immediately trigger a new deployment. This brings us to the next problem: the previous deployment isn't ever "done". The problem is that the sidecar proxy attached to the deployer pod hasn't exited (why would it?). So the pod continues to run, and the deployment will not be considered complete until this pod completes and its containers exit; which will be never (until it times out after 6 hours, at which point the entire deployment will be rolled back). Ugh!

So let's cancel our current running (but failed) deployment:

Wait for the pod to be terminated, and then trigger the deployment again:

Now the app should roll out since the sleep 5 will give the deployer pod some time to wait for the Istio networking magic to do its thing. Although just as before, the deployer pod will never exit. After a while you will see:

You can then run oc get pods and oc get dc/httpd to observe that the application is properly running with its sidecar container:

So let's turn auto-injection off for now:

The hyphen (-) at the end means "delete the label".

In the next part of this series, we'll show you how to do manual injection (which as of Istio 0.6.0 supports OpenShift DeploymentConfig objects), which we'll apply to the entire Coolstore project for some real fun.
Stay tuned!