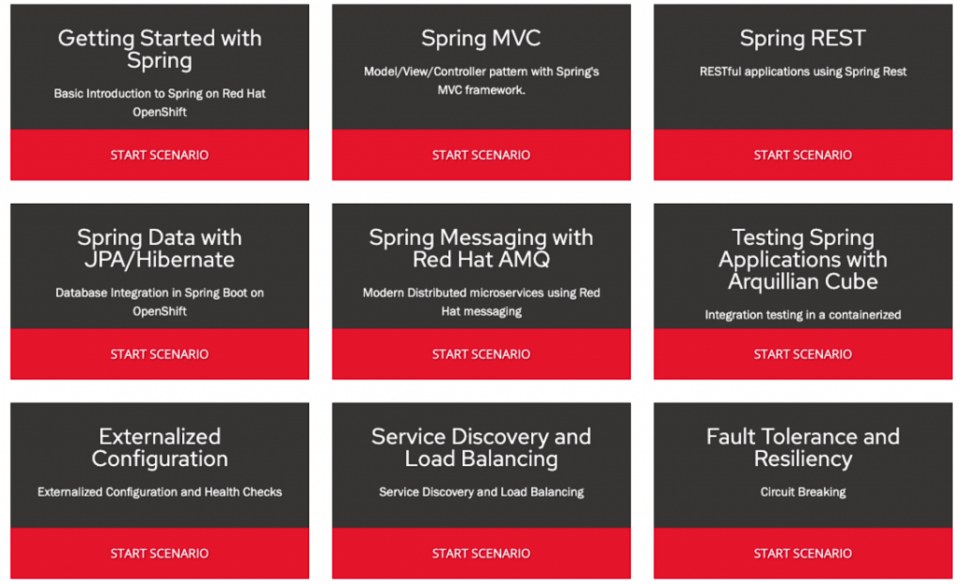 Consult the release notes for a complete list of what's new.

Using developers.redhat.com/launch, you can immediately create and deploy a Spring Boot application directly to OpenShift Online or to your own local OpenShift cluster. This tool provides a hassle-free way of creating applications from scratch, starting with example applications or importing your own, as well as an easy way to build and deploy those applications to Red Hat OpenShift.

Examples are available to showcase how developers can use Spring Boot to build the fundamental building blocks of cloud-native applications and services, such as creating secured RESTful APIs, implementing health checks, externalizing configuration, securing resources, or integrating with the OpenShift Service Mesh based on the Istio project.

To start using Dekorate you just need to add one dependency to your pom.xml:

Then, add one of the provided annotations to your project. For example:

The annotation comes with a lot of optional parameters, which can be used to customize the Deployment and trigger the generation of additional resources, like Service and Ingress. Other features that you can add to your application for various services include:

For an excellent overview of more Dekorate functionality, check out Gytis ' blog How to use Dekorate to create Kubernetes manifests.

The Spring reactive stack is built on Project Reactor, a reactive library that implements backpressure and is compliant with the Reactive Streams specification. It provides the Flux and Mono functional API types that enable asynchronous event stream processing. On top of Project Reactor, Spring provides WebFlux, an asynchronous event-driven web application framework. Reactive applications built with this stack enable non-blocking, asynchronous, event-driven apps that are highly scalable and resilient. They also ease integration with other related reactive libraries like Apache ActiveMQ Artemis, Apache Kafka, or Infinispan (all fully supported via Red Hat Middleware).

This Spring reactive offering by Red Hat brings the benefits of Reactor and WebFlux to OpenShift and standalone Red Hat Enterprise Linux, and it introduces a set of Eclipse Vert.x extensions for the WebFlux framework. This addition allows you to retain the level of abstraction and rapid prototyping capabilities of Spring Boot, and provides an asynchronous I/O API that handles the network communications between the services in your application in a fully reactive manner.

To create a basic reactive HTTP web service, add the following dependency to your pom.xml:

This addition brings in the required dependencies to create reactive applications. Next, create a reactive sample app:

There are several other example applications for authentication via OAuth2, reactive email clients, server-sent events, and more in the Spring Boot Runtime Guide.

The Runtimes team has been continuously adding and improving on the official documentation for building apps with Spring Boot. This effort includes updates in the Release Notes, Getting Started Guide, and the Spring Boot Runtime Guide.

These self-paced scenarios provide you with a preconfigured Red Hat OpenShift instance, accessible from your browser without any downloads or configuration. Use it to experiment with Spring Boot or learn about other technologies within Red Hat Application Runtimes and see how it helps solve real-world problems:

Support for Spring Boot is available to Red Hat customers through a subscription to Red Hat OpenShift Application Runtimes. Contact your local Red Hat representative or Red Hat Sales for details on how you can enjoy the world-class support offered by Red Hat and its worldwide partner network. More information on what's included can be found in Extending support to Spring Boot 2.x for Red Hat OpenShift Application Runtimes.

Moving forward, customers can expect support for Spring Boot and other runtimes according to the Red Hat Product Update and Support Lifecycle.

The Runtimes Spring Boot team is continually taking feedback from customers and the wider community of open source developers, as well as tracking the upstream Spring Boot releases. The team is working to make updates to support based on that feedback, as well as considering support for additional modules from Red Hat and the large Java and Spring community.

This offering was produced by Red Hat’s Application Runtimes product and engineering team along with the Snowdrop upstream community, and involved many hours of development, testing, documentation writing, testing some more, and working with the wider Red Hat community of customers, partners, and Spring developers to incorporate contributions, both big and small. We are glad you have chosen to use it and hope that it meets or exceeds your expectations!