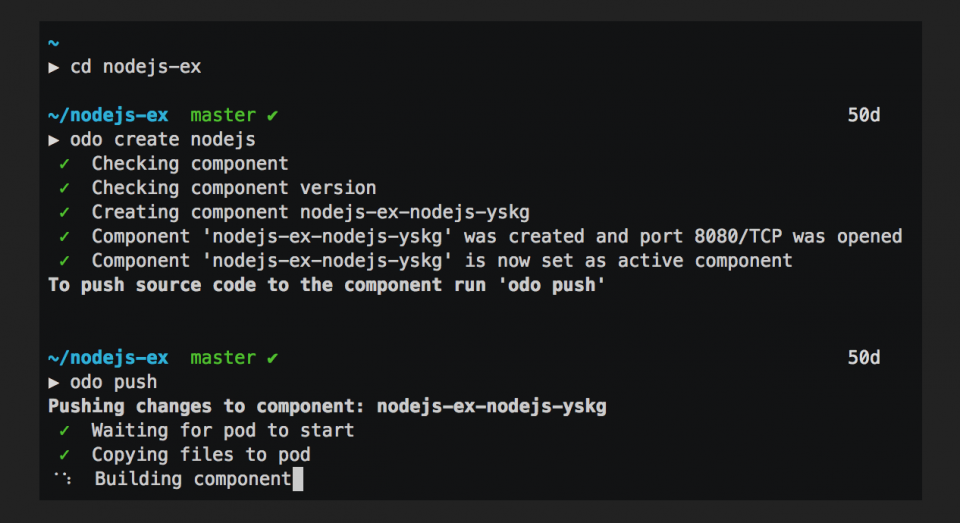 OpenShift Do (odo, for short) is a fast and straightforward CLI for developers who write, build, and iterate constantly on their source code. Instead of using more-refined tools such as oc, odo focuses on the iterative inner-loop cycle of coding (iterating on code changes prior to committing to Git) rather than the management of each application deployed to OpenShift. This article provides an overview of odo's functionality.

We have created odo as a tool for developers to focus on their source code rather than worry about deployment scenarios. It’s as easy as having odo know about your source code by using odo create and specifying the framework for your application. Whether you’re pushing source code or a binary, odo will be smart enough with odo push to know how to run or build it as needed.

With odo, you can iterate on your source code and watch as odo automatically validates and deploys the source code to OpenShift with one simple command: odo watch.

Red Hat OpenShift is an on-premise platform built around containers and on top of Kubernetes, providing developers with a user interface and command line to deploy their applications. OpenShift automates the build, deployment, and management of all applications so you can focus on what matters most: code.

When first developing applications on Red Hat OpenShift, developers typically accomplish their tasks in this order:

Odo automates the workflow by combining steps 2 through 6.

The following is a demonstration on deploying an example Node.js application to a Red Hat OpenShift cluster: At Red Hat Summit, you can attend the “Put the dev back in DevOps: Cloud-native at local speed” breakout session, on Tuesday, May 7 at 3:45 p.m., where Jorge Morales will walk you through some of the drivers of odo, talk about other competing tools, and show it in action.

If you prefer a deep dive workshop, Jan Kleinert will lead “Developing applications on Red Hat OpenShift as mere mortals” on Thursday, May 9 at 10:45 a.m., a two-hour hands-on workshop introducing odo in more depth.

If you haven’t registered for Red Hat Summit yet, sign up now to attend. See you in Boston!