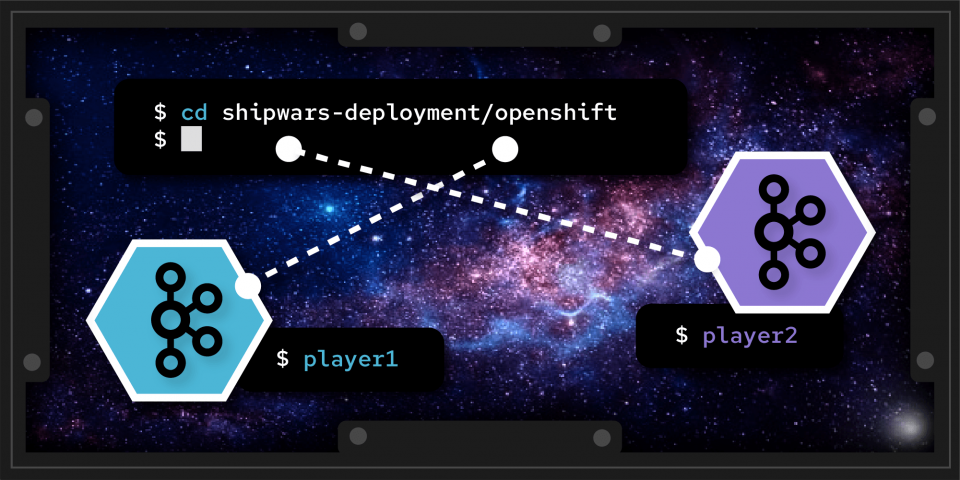 The first half of this article introduced Shipwars, a browser-based video game that’s similar to the classic Battleship tabletop game, but with a server-side AI opponent. We set up a development environment to analyze real-time gaming data and I explained some of the ways you might use game data analysis and telemetry data to improve a product.

In this second half, we'll run the analytics and use the captured data to replay games.

The Shipwars architecture contains several independent Java applications that use the Kafka Streams API. The source code for these applications is in the shipwars-streams repository on GitHub. We'll deploy each of the applications for game data analysis.

The first Kafka Streams application you’ll deploy is an enricher. It performs a join between two sources of data: Players and Attacks (also known as "shots"). Specifically, this application performs a KStream-GlobalKTable join. The join involves deserializing the JSON data from two Kafka topics into POJOs using Serdes for serialization and deserialization. Then, we use the Kafka Streams DSL to join the data sources.

A KStream is an abstraction above a stream of events in a specific topic. Kafka Streams applications can map, filter, and even join KStream instances with one another and instances of GlobalKTable. The Shipwars application demonstrates this feature.

Every attack made in Shipwars arrives on a KStream subscribed to the shipwars-attacks topic. It is then joined with the associated player data in the GlobalKTable to create a new record. The relevant code is included in Figure 1. Also see the a TopologyShotMapper repository on GitHub. 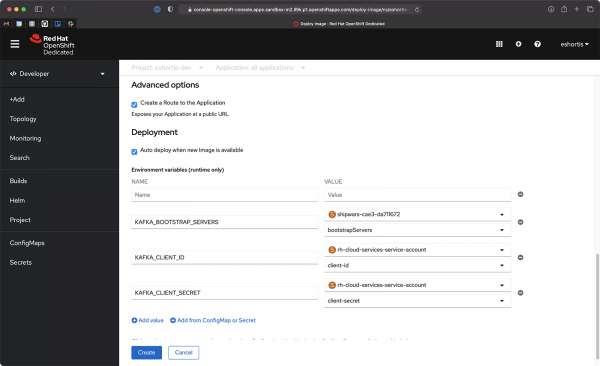 Play a round of Shipwars

Now you’ve successfully deployed the first Kafka Streams application. It should appear as a Quarkus icon in the OpenShift Topology view. The blue ring around it indicates that the application is in a healthy running state.

If you’d like to view the data in the new topic, you can do so using a Kafka client such as kafkacat, which is shown in Figure 3.

The next two Kafka Streams applications perform aggregations. These aggregations are stateful operations that track the rolling state of a value for a particular key.

The first application, the shot distribution aggregator, aggregates the total number of shots against each cell on the 5x5 grid used by Shipwars. This aggregate breaks down into the following integer values:

To create this aggregation, you need the data output by the Kafka Streams enricher you deployed previously. The data in the shipwars-attacks topic doesn’t specify whether the attacker was a human or AI. The joined data does specify this important piece of information.

There are two other interesting aspects of this application:

You will find the Kafka Streams DSL code for the shot distribution aggregator in the TopologyShotAnalysis repository. Figure 4 shows the relevant code.

We used the second aggregation at Red Hat Summit 2021. It forms a complete record of all turns for each match, so that you can analyze them later or even replay them as we did in our demonstration.

Both applications can be deployed in the exact same manner as the enricher. Simply use quay.io/evanshortiss/shipwars-streams-shot-distribution and quay.io/evanshortiss/shipwars-streams-match-aggregates as the Image name and add each to the shipwars-analysis application that you created for the enricher application. View the logs once each application has started. Assuming you played a Shipwars match, you should immediately see logs stating that the aggregate shots record has been updated for a specific game ID.

Use the Open URL button on the shipwars-streams-shot-distribution node in the OpenShift Topology view to access the exposed route for the application. Append /shot-distribution to the opened URL, in the following format:

The endpoint will return the aggregations in JSON format, as shown in Figure 5. The top-level keys are the game generation IDs. Each nested key represents a cell (X, Y coordinate) on the game grid, and contains the resulting hits and misses against that cell, classified by player type.

This aggregated data could be used in various ways. The Python AI move service could query it and adapt the game difficulty based on the hit rate of players. Alternatively, we could use the data to display a heatmap of shot activity, as you’ll see shortly.

You can view aggregated match records using the same approach. Click the Open URL button on the shipwars-streams-match-aggregate node in the OpenShift Topology view, and append /replays to the URL to view match records.

We use SmallRye and MicroProfile Reactive Streams, exposed by the shipwars-streams-shot-distribution application, to create visualizations of the attacks on a real-time heatmap. The application is custom in this case, but it’s common to ingest the data into other analysis tools and systems using Kafka Connect.

You can test this endpoint by starting a cURL request using the following commands, and then playing the Shipwars game in your browser:

Your cURL request should print data similar to the result shown in Figure 6. 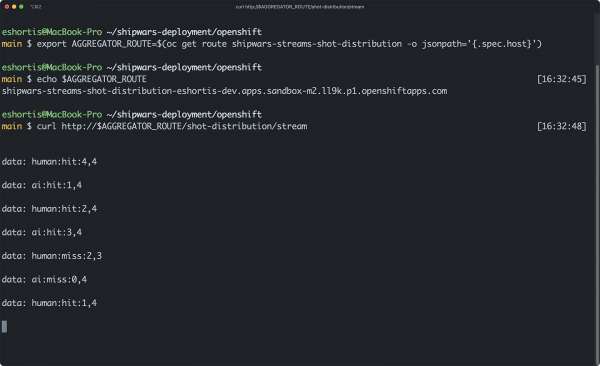 Figure 6: Using cURL to display a stream of server-sent events.

Once you’re satisfied that the endpoint is working as expected, you can deploy the heatmap application. This is a web-based application that uses TypeScript, Tailwind CSS, and Parcel Bundler. We're using Node.js to run the build tools, and NGINX serves the resulting HTML, CSS, and JavaScript.

The new application shows up in the OpenShift Topology view immediately, but you’ll need to wait for the build to complete before the application becomes usable. Click the Open URL button to view the application UI when the build has finished. A loading spinner is displayed initially, but once you start to play Shipwars in another browser window the heatmap will update in real-time, similar to the display in Figure 7.

Squares that are targeted frequently will appear darker than squares that are targeted less often. Of course, our game has a low resolution of only 5x5, but in a game with larger maps (such as the first-person shooter games mentioned in the first half of this article) players would tend to spend more time in areas with better weapons and tactical cover. This would result in a useful heatmap for analyzing player behavior.

The interface we used to view replays at Red Hat Summit 2021 was created by Luke Dary. You can view the aggregated match replays by deploying the UI like so: 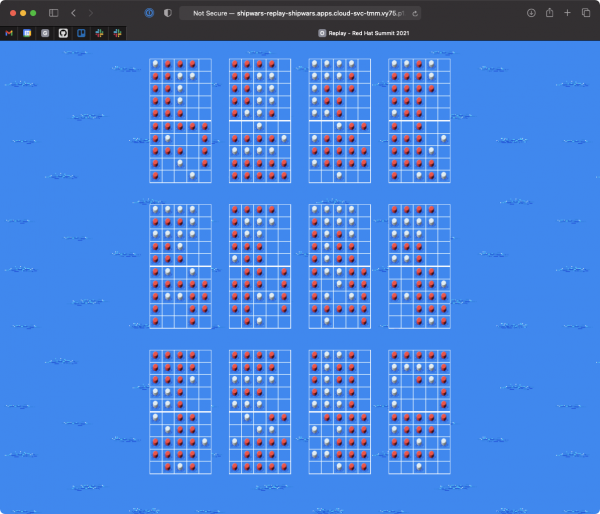 If you made it this far, well done! You’ve learned how to: