This article is the first article in a two-part series that takes you through the creation of an application using plain Kubernetes instead of OpenShift.

Where commands differ between Bash and PowerShell, I'll note the difference. Otherwise, the commands work at either command line.

A personal note from the author

Sit down, relax, and be prepared to spend some quality time with this tutorial. We cover a lot of ground, and I've attempted to mimic a real-life situation in order to bring the most value to the time you spend on the tutorial. If you're new to Kubernetes, you'll go from zero to deploying applications in this guide. You'll be rolling out a back-end application, a front-end application, and (in part 2) a database. You'll also be scaling an application and updating an application. You'll be doing hands-on experimentation, gaining skills that are 100% applicable to a production environment. Thanks for taking to time to trust me with your learning. Enjoy.

It should take less than half an hour to set up all the following tools if you don't have them already. For most of the tools, I have not provided URLs because they are different for different operating systems, but they can all be found easily through web searches.

Steps in this article

The following steps build and deploy the tutorial's Kubernetes application in the Developer Sandbox:

Download or clone three repositories (repos) from GitHub using the following commands. You can choose any directory on your system to hold these repos:

This tutorial refers to the three directories you just created by their repo names: quotesweb, quotemysql, and qotd-python.

Logging into the Developer Sandbox

You don't actually "log in to" a Kubernetes cluster. Instead, you set your local environment to connect to your cluster when you issue kubectl commands. This procedure is a bit cumbersome but necessary. You can, of course, automate it. You can also use tools to help you. Finally, if you have the OpenShift CLI (the oc command) installed, you can cheat and use the oc login command—it does make life a lot easier.

Three elements go into setting up your environment:

After establishing those three elements, you use the context that has been created.

Before establishing the context, you need to extract the following information from your sandbox:

The following sections show how to to get this information, which requires you to log in to your sandbox.

This is displayed in the upper right corner of the dashboard in a red box and looks like Figure 1.

Given this example, your username would be rhn-engineering-dschenck. Insert the name from your dashboard wherever {username} appears in this article.

Note: The Kubernetes namespace (which OpenShift calls a project) you'll be using is simply your username with -dev appended: e.g., rhn-engineering-dschenck-dev.

The procedure to get this token is a bit complicated and is explained in the article Access your Developer Sandbox for Red Hat OpenShift from the command line. Find the DevSandbox option to get the authorization token, and insert it wherever {token} appears in this article.

Name of the cluster

The cluster name is a modification of the host URL with all dots converted to dashes. You must also change the console-openshift-console-apps portion of the host URL to that of the API server. For example, if you navigate to the Topology page of your dashboard, your URL looks something like Figure 2.

Figure 2: String that is the basis for a cluster name, from the Topology page.

Given this string, the cluster name is api-sandbox-x8i5-p1-openshiftapps-com:6443.

Insert the cluster name you derived from your Topology page wherever {cluster} appears in this article.

The context is constructed by combining your username with the name of the cluster in the following format: {username}-dev/{cluster}/{username}.

For example, using what we have up to this point, your context would be:

Insert your context wherever {context} appears in this article.

URL of the cluster API server

This is almost the same as the cluster name, but it keeps the dots. For example, given what we have up to this point, the URL would be :

Insert your API server's URL wherever {server} appears in this article.

The kubectl config view command shows your configuration. If you wish, you can remove all of your local Kubernetes configuration information by deleting the ~/.kube/config file.

Use this command in Bash:

Use this command in PowerShell:

Connecting to your Kubernetes cluster

Using the information you have obtained from your sandbox, issue the following commands and substitute your own values where noted:

What we're creating in this tutorial

This tutorial guides you through using Kubernetes to create three components:

Figure 3 shows a typical display from the complete application.

Figure 3: Animated GIF displayed by the application created in this article.

About the RESTful back-end service

A back-end application named quotes, written in Python 3.8, supplies strings resembling a "quote of the day" via a RESTful API. The endpoints are described in Table 1.

This step creates Kubernetes objects associated with the quotes application: a deployment, a service, and a route (which is similar to Ingress and Ingress Controller objects in Kubernetes). We will also set an environment variable that will allow us to change the name of the database service if we want to.

About the route, Ingress, and Ingress controller

Because Developer Sandbox for Red Hat OpenShift is administered by Red Hat, you do not have administrator access to the Kubernetes cluster. One of the limitations created by this access restriction is that you are not granted rights to create Ingress and Ingress controller objects.

OpenShift has its own built-in Ingress-like object, the Route. For this tutorial, we're going to "cheat" and use the Route object. Be aware that we are using this workaround. In your own Kubernetes cluster you'll create the Ingress and Ingress controller objects.

The blog posting Kubernetes Ingress vs OpenShift Route offers more historical background and details on the role of the route.

In the directory where you cloned the qotd-python repo, move into the k8s sub-directory and run the following commands:

At this point, you have the back-end quotes application running in a Kubernetes pod. It's exposed within Kubernetes as a service, and the route allows anyone to access it over the internet. Therefore, you can run the kubectl get routes command to get the route URL and then issue a curl command with the route URL to see the service serving up data. Here's an example:

The quotes-deployment.yaml file shows that our pods will be named quotesweb (plus the random characters, e.g., "quotesweb-5468c95fc6-5sp9j"), while the label will be app=quotesweb:

Note that the pod name and application name can differ. Be careful here, because this is where good or poor management can make a big difference.

The YAML file also shows that the deployment (the quotes-deployment.yaml file) uses the following image:

This image is a Linux image that has data (six "quote of the day" type entries) hard-coded into the source code. The second article in this series upgrades the image to version 2, which reads quotes from a MariaDB database running in your Kubernetes cluster.

Before you create the React front-end program, you need to change some code in the back-end application, build an image, and push the image to a publicly available registry from which you can pull it into your Kubernetes cluster.

First, change the source code for the quotesweb application to point to the route you created to the quotes service running in the Kubernetes cluster. You can find the URL of this route by running the following command:

The URL, plus the endpoint you need (/quotes/random), needs to be specified in the quotesweb application. The URL looks somewhat like the following:

To alter the code, change into your quotesweb/src/components directory and edit the quotes.js file. Substitute your URL for your-url-goes-here in line 26 of the code (Figure 4):

Figure 4: Inserting the proper URL for the quotes service.

Move back into your quotesweb directory where the Dockerfile file is located and build your image. You will need to use your own naming pattern based on your own image registry. For example, if you are using Docker Hub as your image registry, and your username there is janedoe, you'd enter the command:

No matter what image registry you use, you'll need to log in to it: e.g., run docker login.

With the image built, push it to your image registry. For example:

The name of the image you create (such as quay.io/donschenck/quotesweb:v1) will be used when you alter the deployment file, quote-deployment.yaml. This deployment file is in the k8s subdirectory of quotesweb. Find and change the following line, replacing the image name with your own image.

This change (Figure 5) will direct Kubernetes to pull your custom-built image to create the quotesweb front-end application: 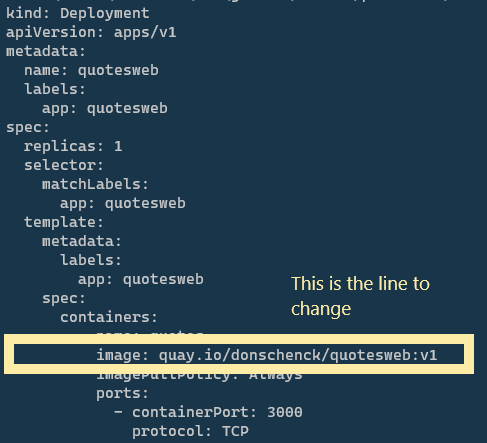 Optionally, you can leave the deployment file unchanged, and use the image that I've built.

Why use the external, publicly available route?

When you want one service in Kubernetes to communicate with another Kubernetes service, you use the internal service name. For example, the URL to communicate with the quotes service might be http://quotes/quotes/random. However, because you are using a React application, this won't work. React sends a JavaScript payload to the browser where the JavaScript executes. Because this code, communicating with the quotes application's RESTful API, is running in the browser, it is outside Kubernetes, and therefore must use a public URL to reach your back-end quotes service.

"But can't the whole world access this?" you ask.

Yes. If this were your actual production architecture, you would implement a form of authorization here or use a secure API service such as Red Hat 3scale API Management.

It's time to get our front-end quotesweb application up and running in our Kubernetes cluster.

In your quotesweb/k8s directory on your local machine, run the following commands to create the deployment, service, and route:

Here's an example from my own machine:

Get the URL with which you can view quotesweb in your browser:

Here's an example from my own machine:

When you paste the "quotesweb" URL into your browser, you can see the QuoteWeb application running (Figure 6). 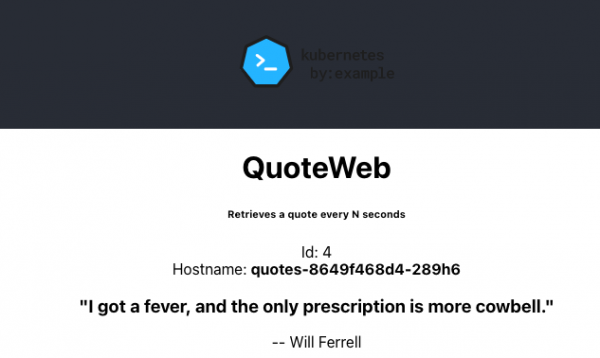 At this point, we have two applications (or Kubernetes services) running in our cluster. As you watch the QuoteWeb application in your browser, you will notice that the hostname is always the same. That's because you have only one pod running our quotes service. You can prove this with the following command:

Although Kubernetes can be configured to autoscale by spinning up additional pods, you can mimic this behavior from the command line and observe the results in your browser. Use the following command to increase the number of pods to 3:

If you now run kubectl get pods, you'll notice that there are more pods serving quotes.

What you accomplished so far

If you actually performed the steps we've gone through in this article and successfully exposed your applications, you learned the following tasks:

In the next article of the series, you'll create and populate a database running in Kubernetes to serve your application. You'll also see how easy it is to update an application.