Know how RESTful your API is: An Overview of the Richardson Maturity Model 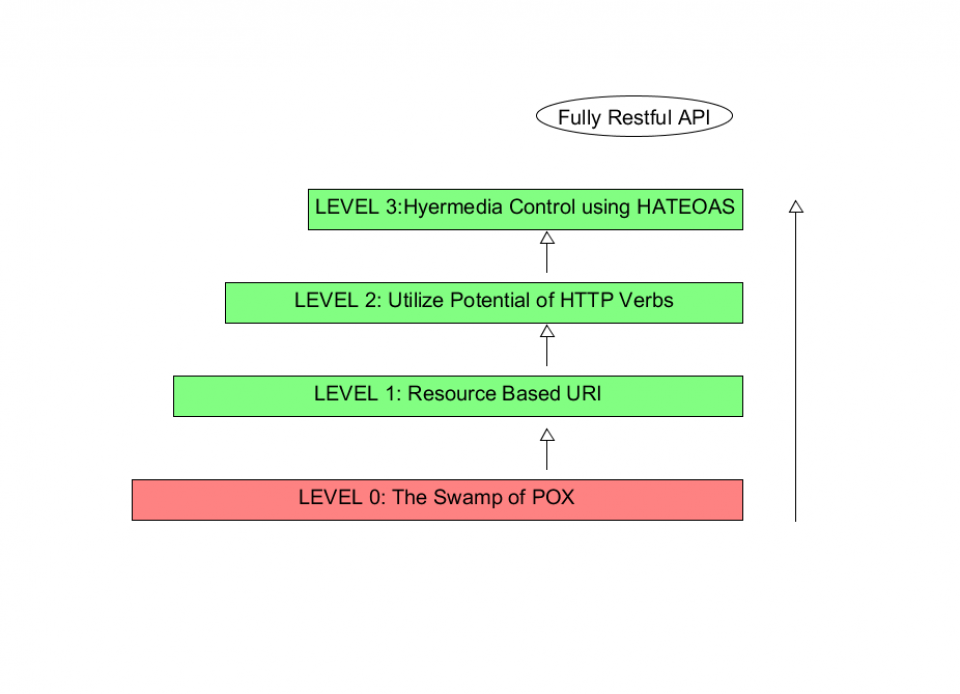 Most of the time, I see developers are bit confused about the term REST. For some enterprise application developers, the meaning of REST is JSON i.e. if they are using JSON in their application, which means they working on REST API, which is not true to some extent. Let's take a look what exactly a REST API is.

According to the Richardson Maturity Model, any REST API belongs to any of the maturity levels from Level 0 to Level 3, mentioned below.

It's not necessary that every REST API developed should be as high as Level 3. But this model helps the developers of REST API to know at which Level their API belongs to and how can they make their API better by moving up in the above model hierarchy.

Level 0: The Swamp of POX

Here's how the Endpoint at the server side will know what to do with an incoming request from the Client or what operations to perform like create a tweet, delete a tweet, or comment on a tweet etc. Also, how can an API Client tell the Service Endpoint to do different operations?

In SOAP-Based web services, this is done by sending a message or request body, which is sent to the endpoint via SOAP protocol. The Request Body essentially contains all information about the operation (like DELETE tweet, CREATE tweet, Update tweet etc.) and data on which the operation is performed, e.g. for creating a tweet , the Request body may be something like:

Notice that all these requests go to a single endpoint and that's how the endpoint knows how to do different operations. Since Request body itself identifies what kind of operation needs to be performed, it makes sense to use single URI for all operations. Or we can say that the same http method can be used for each operation on tweet because all the details about the operation are carried in the Request Body (called SOAP XML also) and we are not leveraging the potential of HTTP Methods/Verbs. As HTTP is used just as a tunnel between the client and server at this Level.

This is called swamp of POX (plain old XML) approach. So, everything is defined by XML in the case of SOAP web service and that is called POX(Plain Old XML).

Example: Let's say we want to create a tweet and decide later we want to delete it. So we will have Resource "Tweet" and we can form resource based URI like http://<host name>:<port>/api/tweets. Now, how to tell this single resource based URI to do different operations and the answer is using HTTP verbs like below.

A sample Delete Request for deleting a tweet at server side.

In this example, we observe both requests are going to single Resource Based Address and Operations is not managed by Request Body anymore and we make use of HTTP methods to perform different operations on the same URI and Request Body merely carrying raw data on which the operation will be performed at the server side.We are making use of proper status codes also so that it can be helpful for a client that whether the operation is successful or not.

LEVEL 3: Use Hypermedia or HATEOAS

Example: Let's say the API Client wants to get all the tweets available in the Server and the list of comments on a particular tweet. To get this information, the Client should be aware of both the endpoints and URI performing their tasks respectively.

If we observe the above example carefully, once the client makes an HTTP GET request to /tweets endpoint, the Client gets all the tweets in the server along with some extra information, which conveys to the Client. In that case, it wants to get all comments on a tweet, use the endpoint sent in response, which is nothing but the concept of Hypermedia in Rest world. So now the Client does not need to know the endpoint to get all comments on a tweet, in fact, the API itself is telling the client to use the endpoint, which is sent in response. So Hypermedia in response is driving the application state and that's why the name HATEOAS(Hypermedia as Engine of Application State).