Today, you can find a lot articles about Kubernetes or OpenShift. This is not such an article. I started using containers, especially Docker, back in 2013, and in the beginning, I mainly used them to isolate things and have reproducible builds. The same is true here; we'll build a container, push it to DockerHub for distribution, and download it on other machines on the fly when running docker run ... so don’t expect crazy things to happen here.

In fact, even if you don’t have any prior knowledge of Docker, you should still be able to follow along. Getting and installing the Docker Engine in the Community Version (on Linux) or the Docker Desktop (on macOS and Windows) is completely enough.

In terms of C++, I don’t expect anything code-wise except that your project uses CMake and compiles with GCC or Clang.

I recently started a new job at Red Hat where I get the chance to work on the LLDB project. The first thing I noticed, after not having worked with C++ for quite a while, was the slowness of compilation. I worked with Go for a couple of years, and compilation performance isn’t an issue there at all. It simply vanishes from the picture.

When I say that compilation was slow for LLDB, I mean that compiling the lldb target (git tag: llvmorg-7.1.0) in release mode takes close to two hours. Release builds are already the fastest to build and given that I need to build a total of 7 or more variants of LLDB (clang/gcc, debug/release, asan/no asan, assert/no assert, …) this makes compilation time take up a whole working day.

My normal developer system consists of a three-year-old Lenovo Thinkpad T460s laptop, on which I run Fedora 29 and the following tools:

When I compile LLDB on my development laptop using make and four compile jobs ( -j 4 ), the time command reports this:

This means that I have to wait approximately two hours for a one-time compilation.

When I compile LLDB on my cluster (laptop, desktop, iMac) using ninja and 10 compile jobs (as determined by distcc -j ) the time command reports this:

That means compiling with ninja and my distcc cluster is

I hope this motivates you to continue reading.

I have experimented before with ways to speed up compilation using distcc, which lets you distribute your compile jobs onto other machines. It requires you to have the exact same compilers installed on the worker machines (the servers) as on the developer machine (the client).

So I installed a spare machine with Fedora 29 running on it to make it part of my compilation cluster. I installed all the right compilers in the right versions to match the ones I have running on my local machine.

But then I realized that this would be a nightmare to maintain. I didn’t want to trade slowness for complexity. Not to mention all the things I would have to do when I upgrade my developer system to Fedora 30. Do I really have to upgrade all my worker machines in the cluster?

Also, I had an iMac sitting on another desk that doesn’t do much when we’re not doing video or photo editing or music recording with it. Could it be used for compilation? After all, macOS doesn’t have the exact same compilers that I have on my developer machine. This is what I meant by heterogeneous cluster of nodes in the introduction.

To spare you the details of how to set up a distcc server, or how to bring CMake to use it, we’ll jump into Tip #2 right away.

I’ve mentioned before that I have an iMac, which does nothing when I work on my laptop. Wouldn’t it be nice if I could run a container (e.g., with Docker) on it that serves distcc with all the necessary tooling already set up?

To better explain what I'm trying to achieve, here’s a diagram of my compiler cluster architecture. 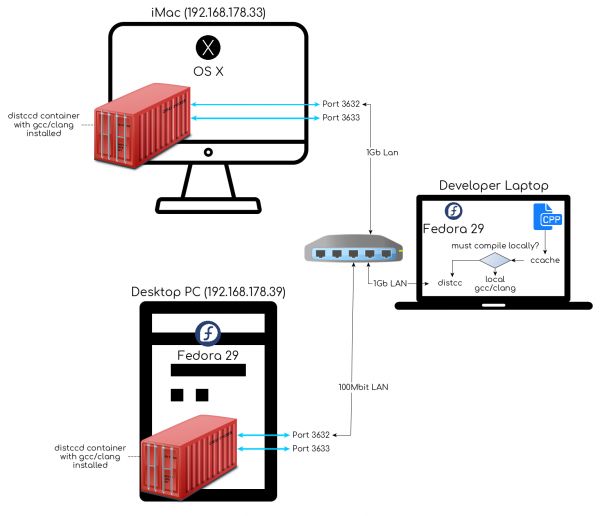 Diagram of my compiler cluster architecture.">

It turns out, you can (almost) completely abstract away from the underlying operating system as long as you can run a docker run command in a terminal.

If you’re not familiar with Docker, don’t worry; it is easy. Think of this rough analogy:

Obviously, the image must exist before the container can exist. To create an image, you write what’s called a Dockerfile that describes the base image  (think operating system here, even though it is not correct) you want to begin with. In my case, I want to be as close to my developer machine as possible, so I use the fedora:29 image.

Then, you install tools that your image ships with (installing tools):

NOTE: All of the above packages are not necessarily needed. I literally installed in my Docker image whatever I had installed on my developer laptop. This, of course, is not needed because distcc only sees pre-processed compilation units. That means it does not need to have all the include files available itself, but instead they will be pushed to the distcc server from my developer laptop.

In a Docker container, there can only be one top-level process that is the heart of the container. In our case, that is distcc. We configure it using a so-called entrypoint and pass along all the flags that we want to keep independent of the machine that runs the container:

If you don’t understand any of the flags above, you can look them up with man distccd.

Then, there are the flags for which we provide defaults but that you also can change:

That is essentially it. You can find the latest version of my Dockerfile here.

How to build the Docker image out of the Dockerfile

Please note, that I’ve configured a repository on DockerHub to automatically build the latest version of my Dockerfile image. Instead of building the image yourself, you could just issue the following command to get the latest version:

If you plan to experiment and tinker with it, you can build the image like so:

How to run the Docker image

To make a Linux, MacOS or Windows-based computer part of your cluster, make sure you have installed and properly configured Docker on that machine. Then head over to a terminal and run the following command:

This will download (a.k.a. pull) my latest distcc Docker image (if not already pulled) and run it in daemon mode ( -d ). It will expose distcc’s main port ( 3632 ) and distcc’s HTTP statistics port ( 3633 ) under the same numbers on the host machine.

How to test the Docker image

The beauty of Docker to me is that you can always use your developer machine to try out stuff. For example, to run the distcc container on your localhost, you can run the same command from before but give the container a name this time so you can refer to it in subsequent Docker commands:

Then I suggest running htopinside the newly created container to see what’s going on:

Running htop inside the localdistcc container shows that your container only runs distccd.">

Let’s compile some code and distribute it to our localdistcc node. Here I’m going to compile LLDB with adjustments:

I’ve marked the sections in bold that are worth looking at. Things to notice are:

Get the IP address of the container running the distcc container using docker inspect .

When exporting DISTCC_HOSTS, I suggest that you take a look at the /7 because that tells distcc to distribute seven jobs to this machine. My machine has eight cores, and I don’t want it to run out of power. By default, only four jobs are sent (see man distcc):

/LIMIT A decimal limit can be added to any host specification to restrict the number of jobs that this client will send to the machine. The limit defaults to four per host (two for local‐host), but may be further restricted by the server. You should only need to increase this for servers with more than two processors.

Use CMake’s CMAKE_<LANG>_COMPILER_LAUNCHER in order to call ccache distcc /usr/bin/gcc instead of just /usr/bin/gcc. This is a nice mechanism to avoid masquerading gcc or g++ .

Masquerading is a technique where you create file named gcc and make it available on your PATH to intercept calls to gcc. Oddly enough, Fedora 29 does this when you install ccache . That package creates /usr/lib64/ccache/gcc that points to /usr/bin/ccache . This effectively masquerades your local gcc binary with ccache . As a matter of fact, ccache will masquerade a whole armada of compilers including but not limited to gcc, g++, clang, clang++ (see rpm -ql ccache for the complete list). This is why we use fully qualified paths to the compiler /usr/bin/gcc .

We let discc figure out how many build jobs to run in parallel by looking at the available hosts: -j $(distcc -j) .

While ninja builds, take a look at the distccmon-gnome output (see the "Troubleshooting" section). It should show something like this:

NOTE: distcc -j assumes that all your hosts listed in DISTCC_HOSTS are distinct machines. But the container runs on your localhost and thereby consumes resources from it. This could impact the performance of your developer machine. If things get slow, just abort the compilation; this is just for testing anyway.

How can I visualize the distribution of the compilation?

On Fedora 29, I use distccmon-gnome or distccmon-text (see screenshots below). To install them, run sudo dnf distcc-gnome distcc .

How do I test that all my hosts are serving distcc?

Alternatively, you can use the much slower nmap:

For better security, how can I specify who is allowed to use my distcc container?

Please note, that the CMD section in the Dockerfile defines a default of --allow 0.0.0.0/0 to allow connections from everywhere. I suggest that you adjust this parameter when running the distcc container:

Do I have to use ccache or can I just use distcc?

How do I send more than 4  jobs to a machine?

In your DISTCC_HOSTS environment variable, you need to adjust the limit, which defaults to 4. It is specified with a /<LIMIT>after the hostname:

How can I see if ccache works for me?

I suggest that you take a look at the output of ccache --show-stats and inspect the cache hit rate. For example, the following hit rate is at 15.61%, which is better than nothing, I’d say.

I hope you liked reading this article and got some value out of it. Check out the accompanying video, too.