Rebase-helper is a tool that helps Linux package maintainers update their to the latest upstream version. New maintainers and experts alike will find value in the convenience this tool can offer. Rebase-helper applies patches, packages, and reports differences between the patched and un-patched versions.In summary, it automates some of the manual tasks usually performed by package maintainers when a new upstream version of that package is released. This article will explain how to get started using rebase-helper, and also demonstrate how it can be integrated with upstream monitoring services.

The workflow can be summarized in just a few steps:

Rebase-helper requires several other programs, including abipkgdiff, rpmdiff, mock, fedpkg, meld, etc. These will be installed automatically as dependencies, and I will talk more about them individually about later on.

Once rebase-helper is installed, it can be run from the git repository root for the desired package by typing the following command (you might also consider adding it to your PATH):

RHEL & CentOS: rebase-helper is also available as EPEL-7 package, so it may also be used on CentOS and Red Hat Enterprise Linux systems (RHEL is now free for developers).

What has changed recently?

What are the other rebase-helper --options?

Integration with an upstream monitoring service 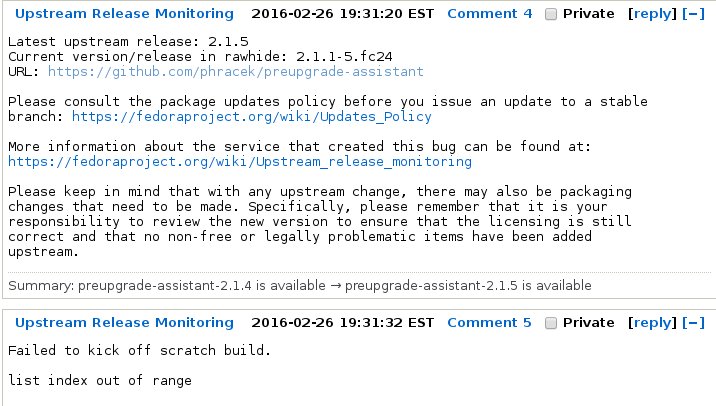 In the case of a failed scratch build, the package maintainer would not see if patches were applied properly or if anything else failed; however, after the integration of rebase-helper, the Bugzilla issue note now includes the result of the package debug output (as an attachment), whether patching failed, the actual scratch build failed, etc: 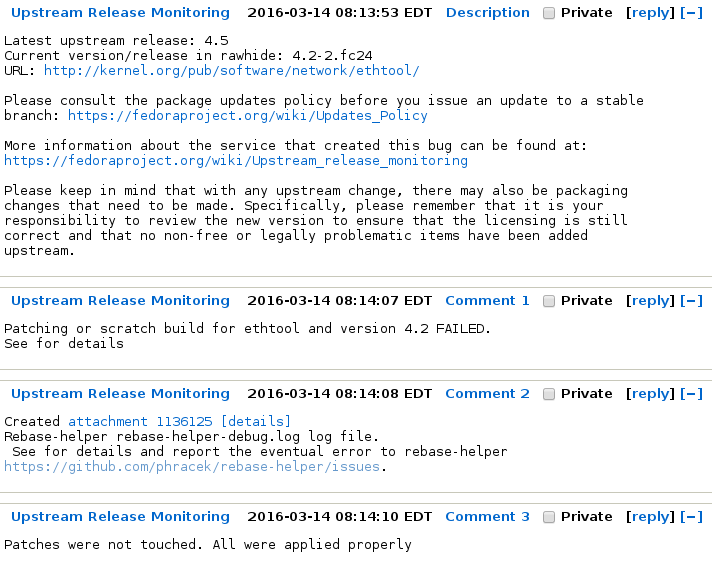 Example of patching new sources and starting scratch builds with fedpkg. This returns task_ids. The bash equivalents are included for comparison: