Through the exercises presented here, you’ll see how to deploy a three-tier Node.js application on Red Hat OpenShift. The example application is a concession kiosk, used to streamline the process of placing concession orders. The user will place an order via the front end web application. The order information will be saved in a MongoDB database, and then the user will be given an order number. Once their order number is called, users can go to the concession window to pay and receive their food. 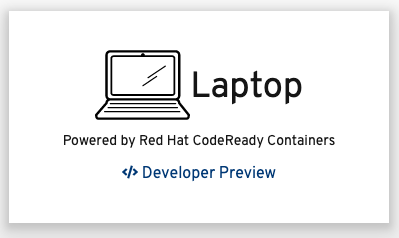 Another option is to sign up for OpenShift Online’s free starter tier or a 30-day free trial of the pro tier.

You have two different options for logging in with oc. One option is to use your username and password:

Another option is to first log into the OpenShift Web Console and then click your username in the top right corner. A drop-down menu will appear. 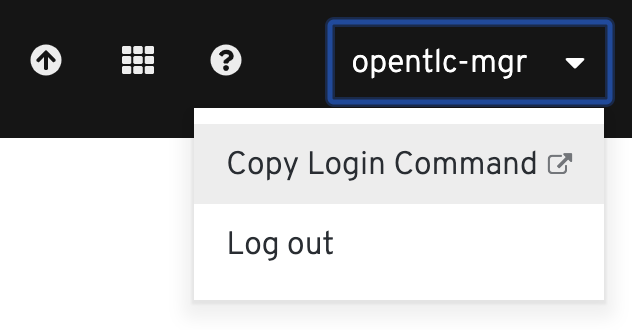 Click on Copy Login Command and follow the instructions, and you’ll get an oc login command with your API token. It will be in a format similar to this:

Once you’re logged in, you’re ready to move on to the next section.

Part 1: Deploy and link the back end

Overview of the back end app

The back end is written using Node.js and Express and will serve as the intermediary between the front end and the database (which we’ll create later in part 3). It will save the order information to the database (if the database is available) and generate an order number that will be provided to the customer.

If you just completed the prerequisites, you are probably still logged into your OpenShift cluster. If not, you can do this multiple ways: you can authenticate with a token, which you can get from the web console, or you can use a username and password. Choose one of these options:

Deploy the back end on OpenShift

First, we need to create a project. We will deploy the back end, front end, and database in this project.

The code for our back end is in this GitHub repo: https://github.com/jankleinert/concession-kiosk-backend.

We’ll use the oc new-app command to build a container image from this source code and then deploy it on OpenShift. The oc new-app command uses Source-to-Image, which can infer which builder image to use based on characteristics of your code. In this case, since we have a package.json file in the repo, new-app knows to use the Node.js builder image.

Run oc logs -f bc/backend to watch the status of the build. Once it displays Push successful, the build is complete.

One of the resources created by running this command was a service. A service gives us a way of accessing the pod(s) for our back end application within the cluster. Run the following to see some basic information about the back end service:

The front end for the application is a simple web app built with Node.js and EJS (embedded JavaScript) for templating. It displays a menu for the concession kiosk. Once a user places their order, it displays a confirmation page with an order number, so that they can wait for their order to be called.

As before, you can watch the logs as the build progresses:

Create a URL for the front end

With our front end deployed, we want to be able to access it in the browser, so we need a publicly accessible URL for it. To do that, we will create a Route to expose the service.

Then, we can run the following command to get the route that was created.

Copy that URL and paste it into your browser. You should see a Concession Kiosk Menu like the one below. 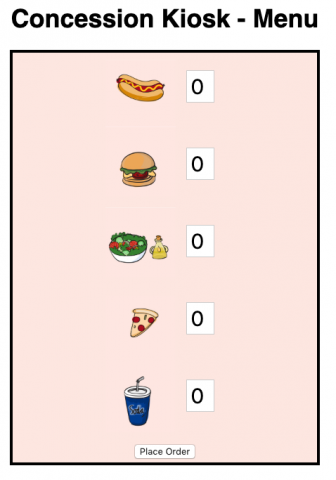 Try it out to see how it works. Users can select the items and quantities they want to order and once their order is placed, they’ll receive an order number. The order number is just a placeholder for now, until we have a database in place.

In Part 3, we’ll deploy and link the database so that the orders are stored and real order numbers are generated.

Part 3: Deploy and link the database

Up to this point, we’ve been using some hard-coded values for the order number, and we haven’t actually stored the order information anywhere. In this part, we will update that by deploying and connecting to a MongoDB database.

Make sure you are logged in to your Red Hat OpenShift cluster and confirm that you are still in the concession-kiosk project:

We will use a template to create a MongoDB database. A template describes a set of objects that can be parameterized and processed to produce a list of objects for creation by OpenShift. There are a set of templates that are included with OpenShift. The one we will use is the mongodb-ephemeral template.

Create the database using the template:

You should see output that looks something like this:

Update the back end to communicate with the database

With the database up and running, we need to set an environment variable for our back end application that tells it the MongoDB Connection URL. Copy the Connection URL from the output. It will be in this format:

If you look into the index.js file for the back end, you’ll see the following line. We’ll use the oc set env command to set the MONGODB_URL environment variable.

Run this command, replacing the MongoDB connection string with your own:

This change will trigger a new deployment, which should not take long to complete. Reload the front end in your browser and place a new order. Now, for each order you place, you should see a new order number and the contents of your order should be displayed on the thank you page as well. 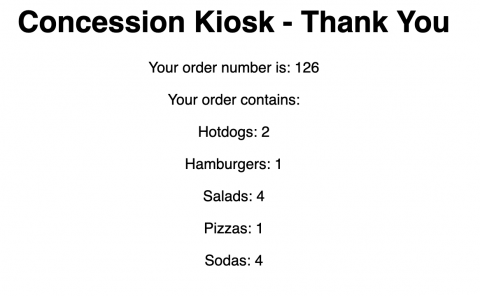