How to install CodeReady Workspaces in a restricted OpenShift 4 environment

It's your first day as a Java programmer, right out of college. You have received your badge, a shiny new laptop, and all of your software requests have been approved. Everything seems to be going well.

You install Eclipse and set up the required Java Development Kit (JDK) in your new development environment. You clone a project from the company's GitHub repository, modify the code, and make your first commit. You are excited to be working on your first project.

But then, a few hours later, a senior programmer asks what version of the JDK you used. It seems that the pipeline is reporting a project failure. All you did was commit Java source code, not binary, and it worked perfectly on your local machine. What could possibly have gone wrong?

Coding in a restricted environment

The issue I described is well-known among programmers as the "It works on my computer, and I don't know why it doesn't work on your computer" problem. Fortunately, this is the type of problem Red Hat CodeReady Workspaces (CRW) can help you solve. CodeReady Workspaces is a cloud-based IDE based on Che. Whereas Che is an open source project, CRW is an enterprise-ready development environment that provides the security, stability, and consistency that many corporations require. All you have to do is open the CRW link in a web browser, sign in with your user credentials, and code inside the browser.

In this article, I show you how to install CodeReady Workspaces in a restricted Red Hat OpenShift 4 environment.

I assume the following about your environment and the installation process:

Note that my example is also based on an air-gapped installation, which is a disconnected installation that supports working in a restricted environment.

Installing CRW 2.0 in a restricted environment requires pulling 13 images from the Red Hat Container Registry, which is shown in Figure 1.

The first five images have been required since CodeReady Workspaces 1.2, and the eight new images are required to deploy CRW 2.0:

Note: Factory is JavaScript Object Notation (JSON) file that defines the elements, including where to find the source code for the workspace, what languages are used in the project, the commands to pre-populate in the IDE for the workspaces, as well as any post-load actions to be performed on the workspace automatically after it is built.

You also need to import the following images:

From CRW 2.1, there seems to be significant updates to the required images listed above. For example:

If you end up using CRW 2.1, please make the appropriate changes.

When you locate a container image that you need, select the image, and click the Tags tab to see the image name and version information. You will specify this information later, to pull the images from the Red Hat Container Registry. As of this writing, the version number for the CodeReady Workspaces Operator is 2.0, as shown in Figure 2. 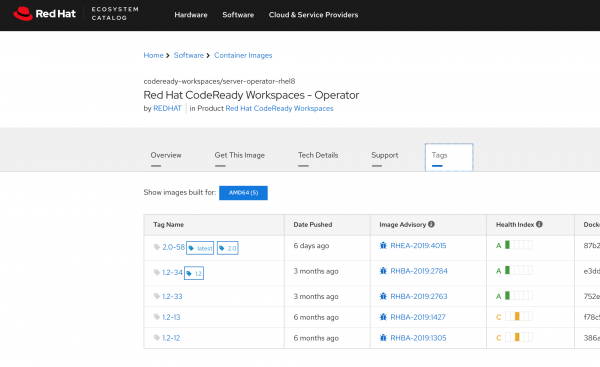 Unless you have access to a common service account or another authentication mechanism, you will need to create an account before you can download images from the registry. Open the Get This Image tab shown in Figure 3 and follow the detailed instructions. 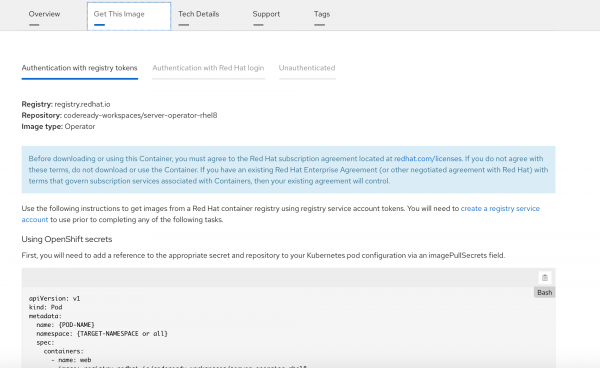 Each private registry has its own approach to pulling images and storing them. For Artifactory, you could use something like the following curl command, which you would update with your own variable values:

Follow the instructions specified by your registry, as well as any requirements that are particular to your organization.

Once you pull the images from the Red Hat Registry, verify that they are stored in your private registry. Figure 4 is a screenshot of my Artifactory registry, where I stored the images required for my CodeReady Workspaces installation. 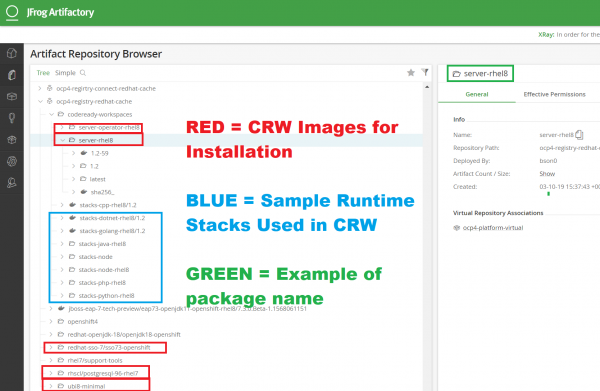 The images that I have outlined in red are required to install CodeReady Workspaces. Use the latest versions available from the Red Hat Registry. The images outlined in blue are stacks, which represent different programming runtimes. Stacks aren't required for your CRW installation, but you will use them in conjunction with a devfile to create new projects. I will introduce you to the process of importing stacks in Part 2. The image outlined in green (in the upper-right corner of the screenshot) is a package name.

Creating a new project with the OpenShift UI

Creating a new project with the OpenShift CLI

Your other option is to use the OpenShift Container Platform (OCP) CLI. In this case, you would open the command line and enter the command oc new-project:

Once again, I named my new project crw-demo.

When you create a new project, OpenShift creates new resources for the project, including two service accounts that you will use later. These are named default and builder.

Next, we'll generate an access token and add it to your OpenShift secrets. You will need this token to pull images from your private registry.

Step 3: Generate an access token and add it to OpenShift secrets

The diagram in Figure 6 shows the general process for generating an access token, which you'll use to authenticate your user ID and gain access to your private registry. The actual process will vary depending on the application, policy, and environment. 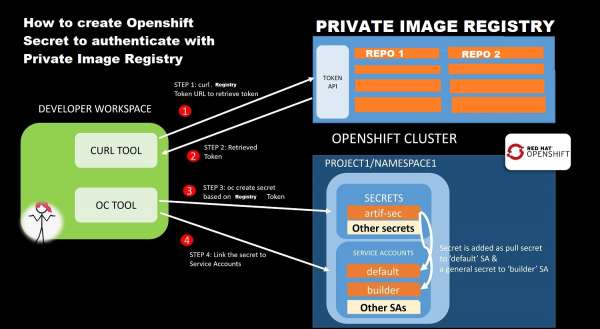 Openshift Secret to Authenticate to Private Rep
Figure 6. Create an OpenShift secret, which you will use to authenticate your ID in the private registry.">

Note: In some environments, the process of generating and authenticating the token is done by a developer, whereas in others it is facilitated by a proxy. Either way, it is essential to select a token that does not expire. Another option would be to use a tool like Vault to rotate the token and refresh OpenShift's secret mechanism. Describing that process is beyond the scope of this article.

If you are manually generating the access token, you could use a curl command as simple as this:

Again, the mechanism will vary depending on your environment and other factors. Check the documentation for your private registry or seek advice from your team before attempting to generate an access token.

Once you generate the token, you can create an OpenShift secret to store the token in a Docker registry. For this, you would use the create secret command on the OC CLI:

In Figure 7, you can see that my token, artif-ocp4-sec, is stored as an OpenShift secret. 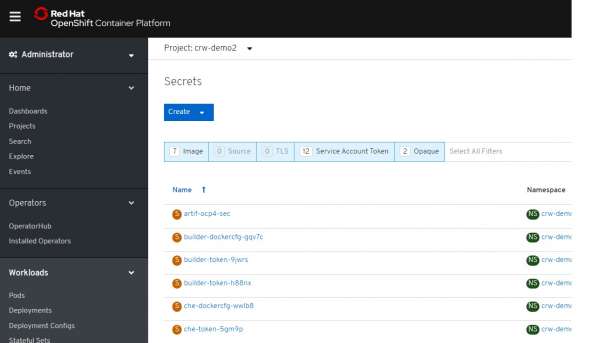 With that, you have now created an Openshift secret with the credentials necessary to pull the image from your private registry. You still need to link the OpenShift secret to your service accounts. Before I show you how to do that, you must install CodeReady Workspaces.

Step 4: Use the OpenShift OperatorHub to install CodeReady Workspaces 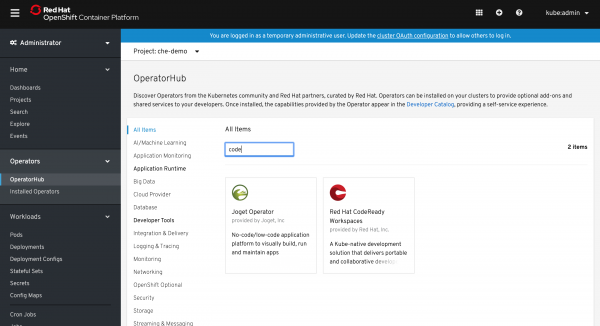 Note: If you don't see the CodeReady Workspaces Operator in your OperatorHub, check the Operator installation instructions in the Red Hat OpenShift 4.3 documentation.

Installing CRW from the OperatorHub

If you go to the OpenShift OperatorHub and select the CodeReady Workspaces Operator, you should see an option to install it. Before pressing the Install button, as shown in Figure 9, make a note of the CRW Operator version (currently 2.0) and the location of the container image. By default, the location points to registry.redhat.io. Later, you will change this location to point to your private registry. 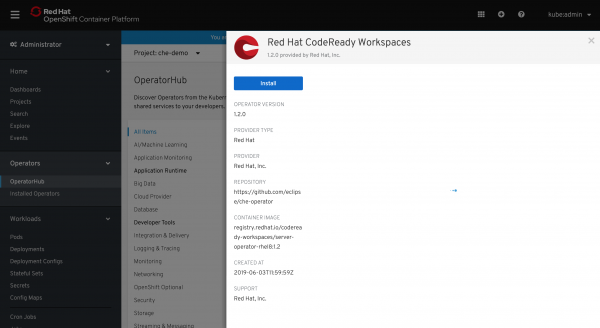 After clicking Install, you will be asked to create an Operator subscription. Make sure that you are in the correct namespace. Click the Subscribe button to subscribe to CodeReady Workspaces Operator, as shown in Figure 10. 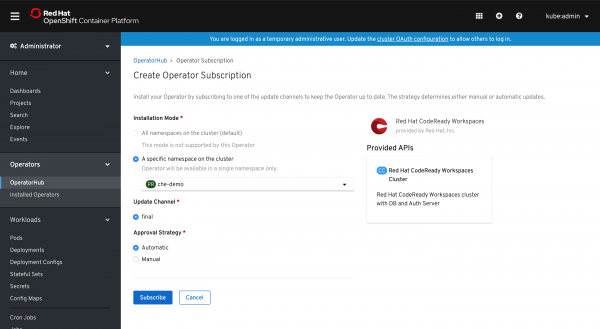 The installation can take a while, so be patient. Once the installation is complete, click the CodeReady Workspaces Operator link to open your new CRW instance, which is shown in Figure 11. 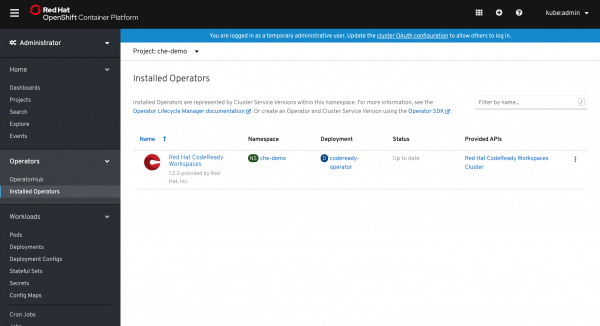 Next, we'll set up a CRW cluster.

So far, you might wonder what about this CRW installation is unique to working in a restricted environment. That will change with this step, where we first create a new CodeReady Workspaces cluster, then modify CRW's custom resource definition (CRD) file. 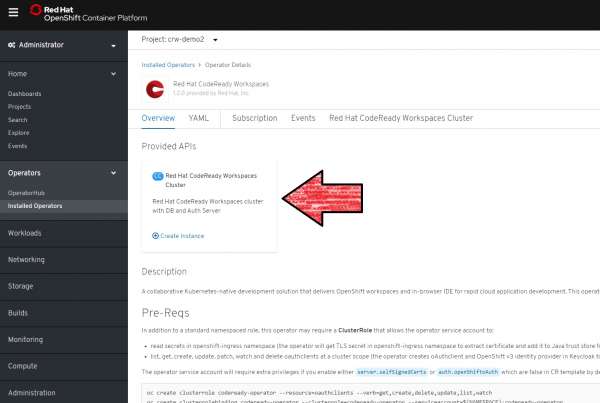 Now, you will be provided with the custom resource definition file for your CodeReady Workspaces Operator. You will need to customize this file, shown in Figure 13, before installing CRW to OpenShift. 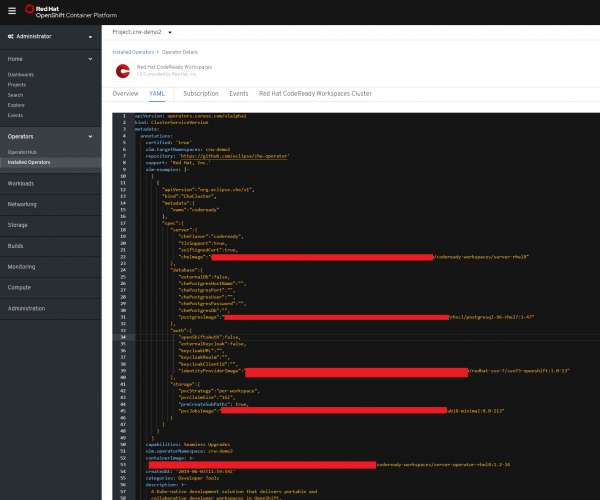 The CRD definition is in YAML format, but note that a section of the file is formatted using JSON. You will modify the properties to include the following seven images, which we pulled from the Red Hat Registry in Step 1:

Note that codeready-workspaces/server-operator-rhel8:2.0 is referenced twice in the CRD file. You will need to add the other images as new properties, as shown in this example:

You can also change other properties in this file. For example, I had to change the following two properties to true when I deployed my CRW.

When you proceed with installing a new CRW instance, your pods will probably fail. To check this in the OpenShift console, go to Workloads -> Pods, then click the pod that you are interested in. As an example, you could click Log.

If you prefer to use the OpenShift CLI, enter oc get pods, then, oc logs -f po/POD_NAME. For POD_NAME, enter the pod you want to verify.

If you inspect the error, you will see that the image-pull event has failed with an error message: ErrImagePull. In the next section, I'll show you how to fix this error by adding your OpenShift secret to the service accounts you will need to run CodeReady Workspaces in a restricted environment.

A CodeReady Workspaces deployment uses the CRW Operator to install and manage all of CRW's life-cycle processes. These processes also require leveraging various service accounts. In overview, the flow looks something like this:

You can find the above service accounts in the OpenShift console by clicking Explore and browsing until you find the ServiceAccounts page, as shown in Figure 14. 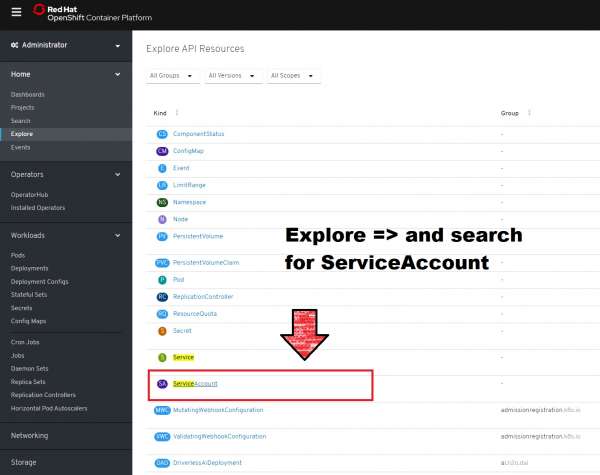 How to find Service Accounts in Openshift 4
Figure 14. Find the ServiceAccounts page in the OpenShift 4 console.">

Alternatively, on the command line, you could enter oc get sa. 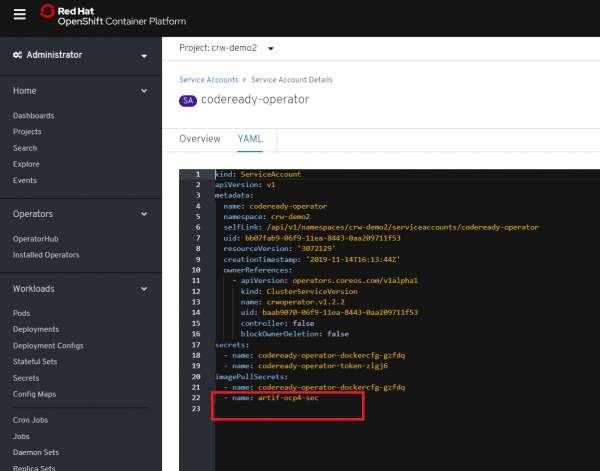 Add Openshift Secret to Service Account
Figure 15. Add your OpenShift secret to the service accounts you want to add.">

Repeat this step for all of the service accounts you need for your CodeReady Workspaces deployment.

Simply modifying your service accounts will not automatically trigger the changes required to deploy a CRW application in a restricted environment. You also need to modify your deployment script, as shown in Figure 16. 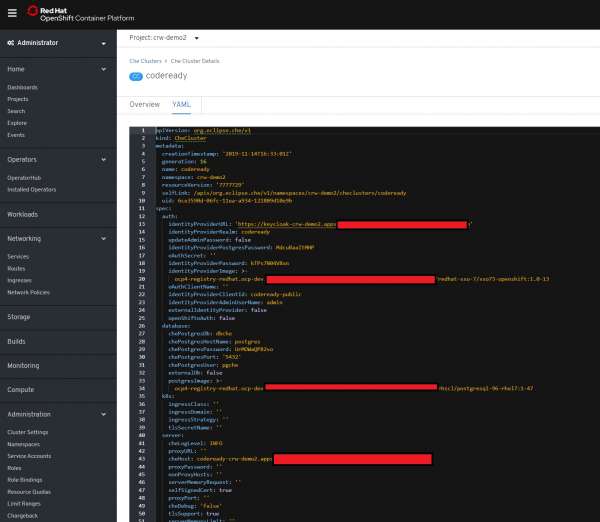 After you've made these changes, check the pods and their logs to see whether you are able to successfully pull the images that are required for your deployment, as shown in Figure 17. Repeat the steps for any additional service accounts to pull the images that you need.

Once everything is up and running, you should see all of your pods are in the Running state, as shown in Figure 18. 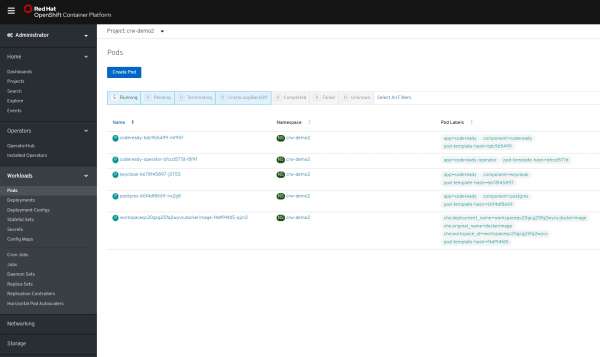 CRW Pods When Installed Successfully
Figure 18. Check the Running tab on the Pods page to find out whether your pods are successfully installed.">

If you notice any issues with a running pod, check for log or event errors, as shown in Figure 19. 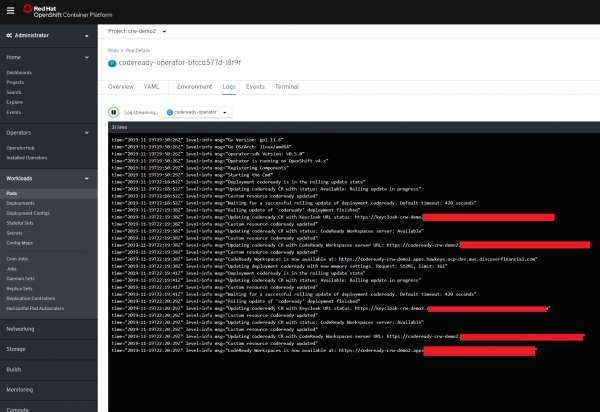 Check Openshift Pod for Any Log or Error
Figure 19. Check for logging or event errors in your running pods.">

Assuming all of your pods are running smoothly, you can now deploy your CodeReady Workspaces instance in a restricted environment, as shown in Figure 20.

That should be it for installing and deploying CodeReady Workspaces. You might encounter additional challenges related to working in a restricted environment.

For now, you should at least have CodeReady Workspaces installed and ready to use in OpenShift 4. However, that is just a start with your journey to the world of CodeReady Workspaces. In my next articles, I will cover how you can further configure CRW after installation, how to try out various development options in CRW, and how to install the monitoring solutions like Prometheus and Grafana in CRW. Until then, see you next time, and feel free to leave comments.