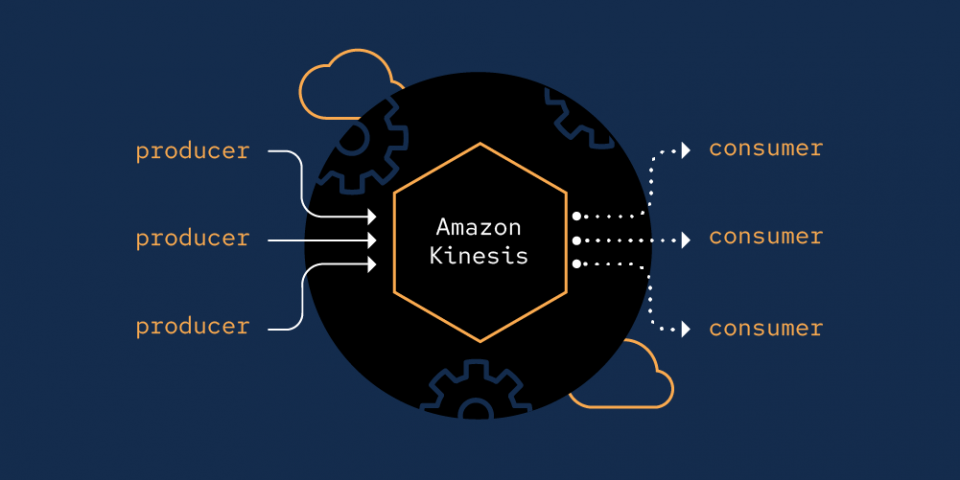 Streaming applications process data such as video, audio, and text as a continuous flow of messages. Working with streams adds a new dimension to application programming. The difference between handling events and data streaming is like going from drinking water one glass at a time to taking it in from a garden hose. This article shows how to get a stream up and running under Amazon Kinesis, a stream management service offered by Amazon Web Services (AWS).

Data streaming is a different way of doing business. Making it all work requires both an understanding of some basic streaming patterns and an awareness of the tools and techniques you can use to get the job done. This article takes you from the initial configuration through running a producer and checking reports on its behavior.

As the name implies, a stream is a continuous flow of data transmitted at high-speed rates between a source and target. Probably the best example of streaming data is video content from a producer such as C-SPAN. The C-SPAN studio streams bytes of video data that make up a telecast through a streaming manager to a data center on the backend. Then that stream is forwarded onto users' computers or smart TVs. In this scenario, you can think of the video source as the producer and the viewers at home as consumers (Figure 1). Multiple consumers are easy to support, which is great for broadcasting.

Figure 1. A data stream goes from a producer through a streaming manager to consumers.

There are also streaming scenarios in which several producers stream data into a streaming manager, which sends them on to consumers. This pattern is shown in Figure 2.

Figure 2. Data streams from multiple producers can be combined in the streaming manager and sent to consumers.

An example of this many-to-many scenario is where many browsers act as producers on the client side of a web application. Each browser sends a continuous stream of messages back to a stream manager on the server side. Each message might describe a particular mouse event from the user's browser.

Then, on the server side, there might be any number of consumers interested in a user's mouse events. The marketing department might be interested in the ads the user clicks on. The user experience team might want to know how much time a user takes moving the mouse around a web page before executing an action. All that any party needs to do to consume information from the stream of interest is establish a connection to the stream manager.

The important thing to understand about streaming is that it's very different from a request/response interaction that handles one message at a time, which is typical when web surfing or using an HTTP API such as REST. In contrast, streams involve working with an enormous amount of messages flowing continuously in one direction all the time.

A number of services support streaming. Google Cloud has its DataFlow service. The streaming component of Red Hat AMQ is based on Apache Kafka and integrates with Red Hat OpenShift. There are other services too. In this article, we're going to look at the Amazon Kinesis service.

Working with a Kinesis data stream is a three-step process, discussed in the sections that follow:

There is actually a fourth step: In order for stream data to be useful, it needs to be processed by a consumer. However, creating and using a consumer is beyond the scope of this article. In this article, we'll just get data into Kinesis Data Streams.

Set up the stream on Amazon Kinesis

There are a few ways to set up a Kinesis stream:

In this article, we'll use the dashboard.

Figure 3 illustrates the process for creating the Kinesis stream. 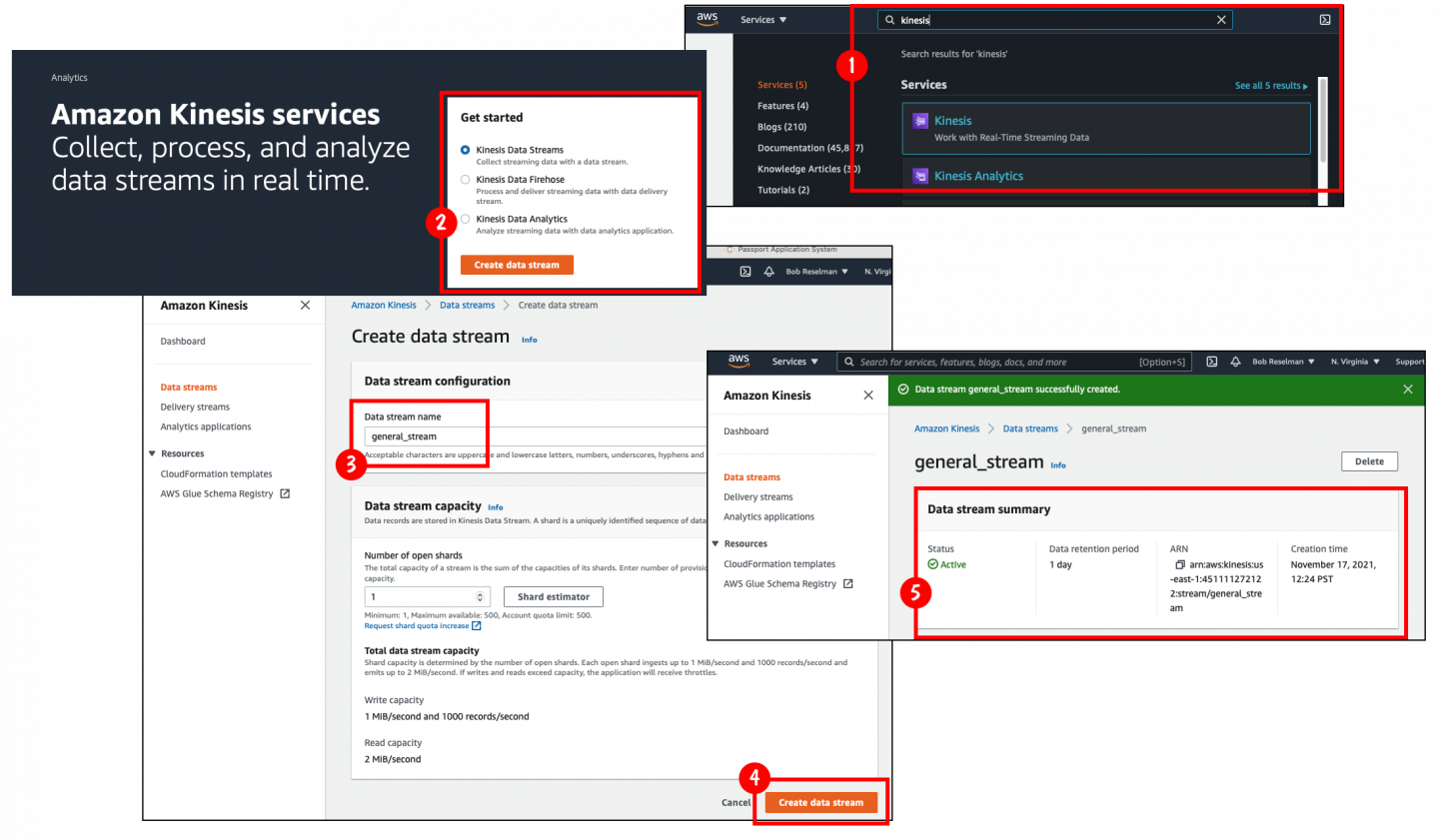 Create a user for the stream

For this article, we'll create a new user specifically dedicated to writing to the stream. Please be advised that we're doing this for demonstration purposes only. At the enterprise level, granting permissions to AWS resources is a very formal process that can vary from company to company. Some companies create user groups with specific permissions and assign users to that group. Other companies assign permissions on a user-by-user basis. In this case, we'll take the single-user approach.

Figure 4. Create a user and save the access information for later use.

Now that you've created the special user, you need to create a policy granting write permission to the stream. After the policy is created, you'll assign it to the user that was created in the previous section.

There are a lot of permissions to choose from. However, if you know exactly the permissions you want to assign to the policy, you can define them in JSON format and apply them directly. This is the approach we'll take. Our policy is defined in the following JSON, which describes all the permissions a user needs to have write access to any Kinesis stream:

Figure 5 illustrates how to add the permissions.

Figure 5. Create a policy by pasting in permissions in JSON format and giving the policy a name.

Now that we've created the policy, we need to apply it to the previously created user named my_kinesis_user. That task is the subject of the next section.

At this point we have a special user named my_kinesis_user and a policy named general-write-access-to-kinesis. Now we need to attach the policy to the user. Figure 6 illustrates the process. 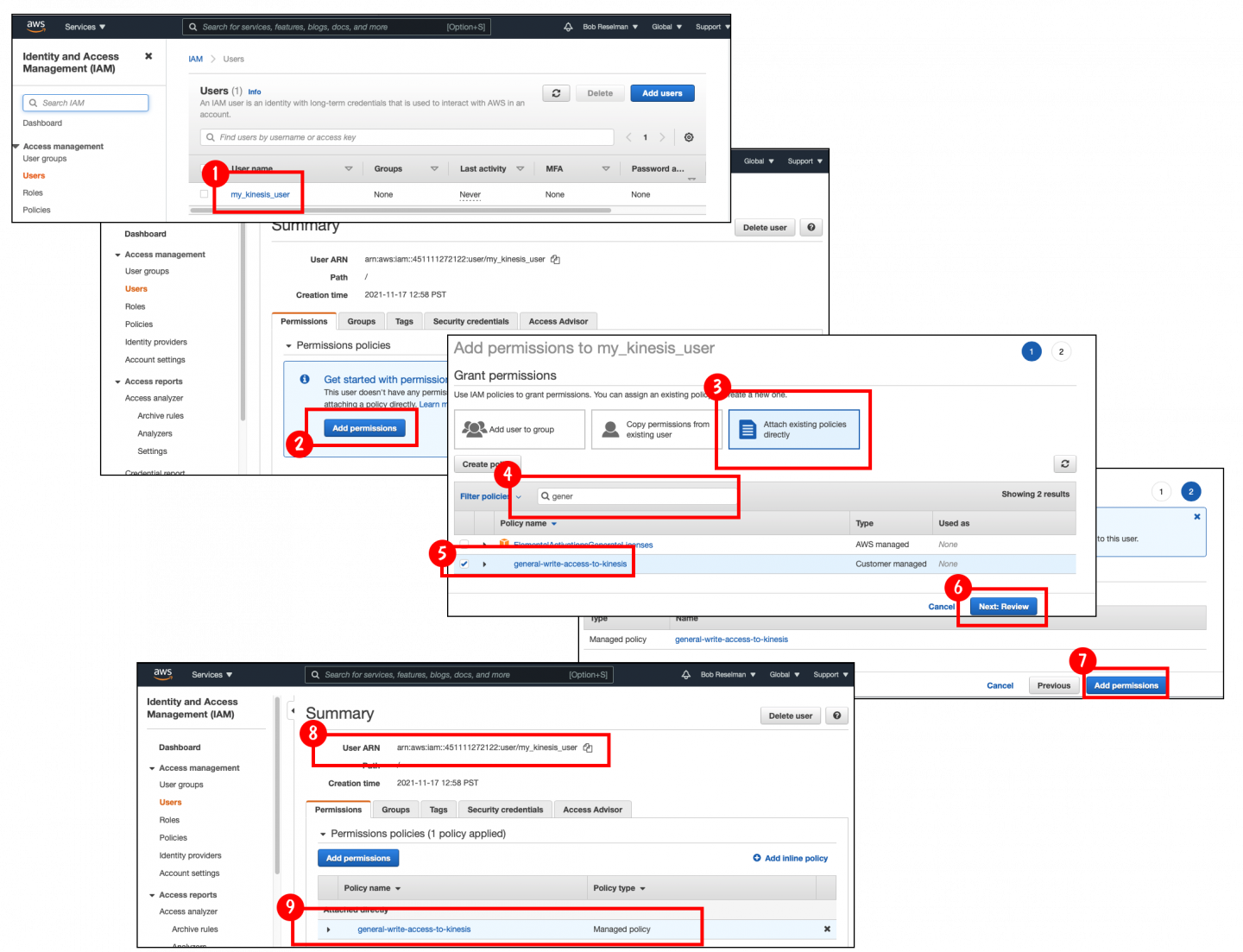 Figure 6. Attach your policy to your user on the Users page of the IAM site.

At this point, you can create an application that uses the AWS SDK to write to a Kinesis stream as the user my_kinesis_user. The program will need the access key ID and secret access key ID credentials you created earlier.

The Node.js application we'll use to demonstrate the use of the AWS SDK is stored as a GitHub project named kinesis-streamer. The application is intended to show you how to write to a Kinesis stream from outside of AWS. You can find the source code in my GitHub repository.

Figure 7 shows a screenshot of three instances of kinesis-streamer submitting data to a single Kinesis stream. This is a real-world example of the "many producer to single stream" pattern shown in Figure 2.

Note: Be advised that the values assigned to the environment variables AWS_ACCESS_KEY_ID and AWS_SECRET_ACCESS_KEY shown in the preceding snippet are only fictitious placeholder values.

The kinesis-streamer project uses the AWS SDK for JavaScript to create a JavaScript client running under Node.js that writes to a Kinesis stream. There are many other ways to send data to Kinesis from both outside and inside AWS. You can use a technology such as AWS's Kinesis Data Generator (KDG) to send messages externally to an internal Kinesis stream. Or you can use an AWS Lambda function to send messages internally to Kinesis from within AWS. Of course, you can always create your own program using one of the many programming languages that are supported by the AWS SDK.

The kinesis-streamer project demonstrates such possibilities. So you might want to examine the source code in the demonstration project to learn the details of working with Kinesis streams using the AWS SDK. The code is well documented to make it easier for developers to absorb the details.

Message activity in a Kinesis stream can be monitored using a number of graphical reports that AWS provides out of the box. From a developer's point of view, at the very least, you'll want to know whether the messages your application emits are actually making it into the Kinesis stream manager. These reports will tell you that information at a glance.

For example, Figure 8 shows reports for incoming data. These reports indicate that the stream received records. As simple as it sounds, this is very useful information. 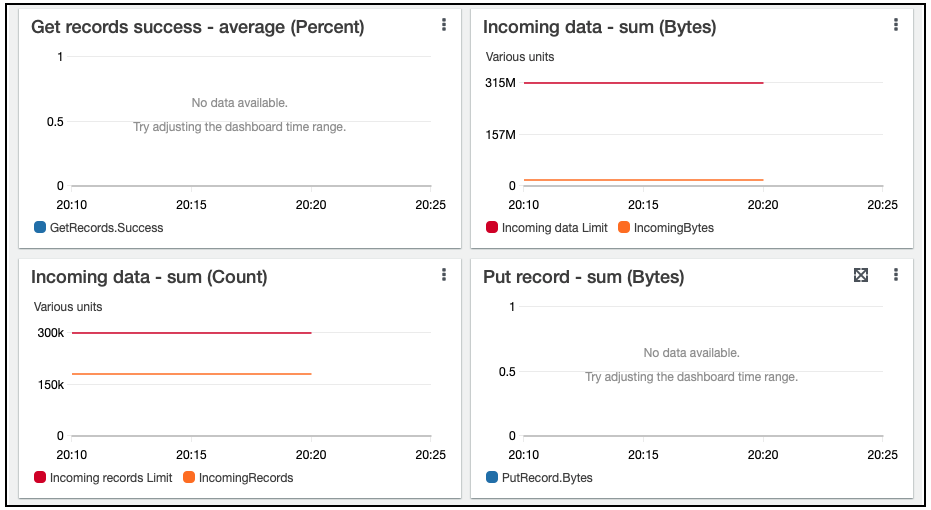 Figure 8. The Kinesis report for incoming data shows several statistics, such as the amount of messages and bytes received.

There are a number of other reports available for monitoring stream activity, such as latency, errors, and throughput reached, to name a few.

Kinesis reporting allows developers to see the results of their application's streaming activity. This information is useful not only for smoke testing on the fly, but also for more extensive troubleshooting when trying to optimize the overall performance of a Kinesis stream.

The information in this article shows you how to create a Kinesis data stream and how to send data to that stream. However, as mentioned earlier, simply sending data to a stream isn't enough. In order for the stream to be useful, there need to be consumers on the other end of the stream that are processing the incoming messages.

Writing consumers is a topic worthy of an article all to itself. Each consumer satisfies a specific use case. Not only do developers need to create programming logic for their producers and consumers, but they also need to decide which programming language best suits the need at hand. For example, Node.js JavaScript applications are operating system agnostic and a bit simpler to program in terms of language syntax, yet consumers written in Go run a lot faster. There's a lot to consider.

As mentioned at the beginning of this article, data streams add a new dimension to application development. Applications that use data streams make online services such as Netflix and Hulu possible. Yet technology does not stand still. New use cases are sure to emerge, and new streaming technologies will appear to meet many of the new challenges that older technologies can't address. As a result, developers who master the intricacies of working with data streams today are sure to enjoy a prosperous career in the future that's to come.

Check out the following resources to learn more: