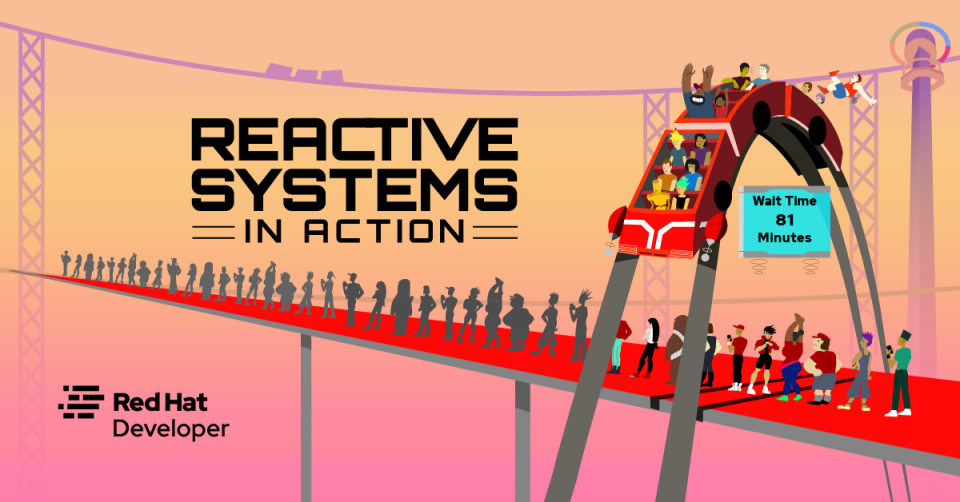 Now that we've taken a look at reactive programming and the Vert.x framework, it's time to actually get down to the code. The code was written by the awesome team of Clement Escoffier, James Falkner, Thomas Qvarnström, and Rodney Russ. Hail and salute them for their efforts.

Step one, of course, is to clone or fork the repo at github.com/reactica/rhte-demo. The repo contains everything we need to create a Red Hat OpenShift cluster, install the necessary middleware, configure the coaster, and deploy it to the cluster.

But before we run the code, let’s talk about how it works. We’ll go through the different parts in this order:

The repo also has two other components: amqp-verticle, which Clement wrote as an adapter for Vert.x applications to communicate with Red Hat AMQ. That verticle serves as a bridge between the Vert.x event bus and AMQP. The other component is vertx-data-grid-client, which is, well, a Vert.x client for Red Hat Data Grid. Suffice to say, they handle the interactions between our code and the middleware.

Finally, there’s a bonus directory, vertx-examples, that contains sample code not used in this exercise.

Throughout this article and in the accompanying videos we use this diagram to show how the reactive system works: The domain-model package defines two classes: User and Ride. They’re both straightforward, and they represent the data used throughout our reactive system.

A User is a guest; they have a name, a currentState, and data that indicates when they got in line and when they finished the ride. The time the User finished the ride is blank at first. It is updated via a RIDE_COMPLETED event later. (BTW, both parts of the domain model have unique IDs, but they’re not important to our discussion here.) The possible states of a user are:

For future purposes, a User object also includes a field called RIDE_ID. The current value is “reactica,” but the system is written so that it could calculate the wait times for other Coderland rides as well. A future park-wide dashboard might give an administrator a quick view of the wait times for multiple rides at a glance.

Feel free to implement the complete suite of microservices for The Compile Driver! That’s a PR we’d love to see.

A Ride object can have three states that we care about:

A Ride object does not include a list of Users on it. When a new Ride is created, microservices in the eventstore component take the appropriate number of Users and change each of their states to ON_RIDE.

The event-generator component contains several verticles that work together to generate events. First is the MainVerticle, which does any initialization work required and creates instances of other classes and verticles as needed. (With the exception of billboard, every component has a MainVerticle.) It implements the Users & Rides box in the diagram:

From an overall application perspective, there are several things we care about:

When a guest gets in line, the currentState field of the User object is set to USER_IN_QUEUE. When a Ride starts, its state field is set to RIDE_STARTED. When a Ride leaves the station, the currentState of some number of Users is set to USER_ON_RIDE. (Remember, the Ride does not contain a list of Users.) If 10 people can ride the coaster at once, the status of at most 10 Users is updated. (Obviously if there are only three people in line, only three Users are modified.) By default the Ride takes 30 seconds, so 30 seconds after the state of the Ride is set to RIDE_STARTED its state is changed to RIDE_COMPLETED. In turn, the currentStates of all the Users on the ON_RIDE are set to COMPLETED_RIDE.

Once the MainVerticle sets up the connection to AMQ, it deploys a BusinessEventTransformer verticle. (BTW, some class names include the word “verticle,” others don’t. I’ll be specific as we go along.) The BusinessEventTransformer code sends ride events to the Vert.x event bus via the queue named “to-ride-event-queue.” User events are sent to both the “to-user-queue” and the “to-enter-event-queue.” The “to-x-event” queues let other components track when a User or Ride is created. The “to-user-queue” is used to keep up with changes to the state of a User. User state changes are shown in the billboard; Ride state changes are not.

MainVerticle deploys two verticles to set up the simulation: RideSimulatorVerticle and UserSimulatorVerticle. They are configured to use the data grid as they create events.

The RideSimulatorVerticle continually creates new Ride objects as long as the coaster is running. The lifecycle of a Ride is:

The UserSimulatorVerticle, on the other hand, creates new User objects as long as user generation is enabled. The lifecycle of a User is:

The User’s state is set to ON_RIDE and ultimately COMPLETED_RIDE as other events are generated by components that we’ll look at shortly.

On to the Events class. It is not a verticle, it is a utility class that creates, as you’d expect, events. An instance of the Events class contains information about a User or Ride object. We'll talk about the JSON structure of Events objects in just a minute.

To keep things simple (simpler, anyway), all of the events have the same JSON format:

Note: A Ride object refers to the round-trip journey the cars of the coaster make from the station, along the tracks, and back again, carrying some number of Users with it. It does not refer to the Reactica roller coaster itself.

The next step is to take User events and store them in the data grid. This is done by the event-store package, which implements the Event Store box in the architecture diagram: With these components up and running, any User event put into AMQ is stored in the data grid. From there, the current-line-updater and queue-length-calculator components use the data grid to deliver the data that the billboard component needs to do its work.

As you would expect, the User went through the states IN_QUEUE, ON_RIDE, and COMPLETED_RIDE. Based on the timestamps of the log messages, Quill Carpet waited roughly 27 seconds to board the ride and the ride lasted for roughly 60 seconds. For each event, the UserEventReceiverVerticle stored the data in the data grid. As we said earlier, a responsive system is message driven. Notice that this verticle doesn’t know what component generated each event; it doesn’t matter. As the events happen, they are moved to the data grid, where they can be handled by other components. Of course, the other verticles don’t know what components consume the events either.

That covers the components that generate events. Those components implement the left-hand side of the original diagram: 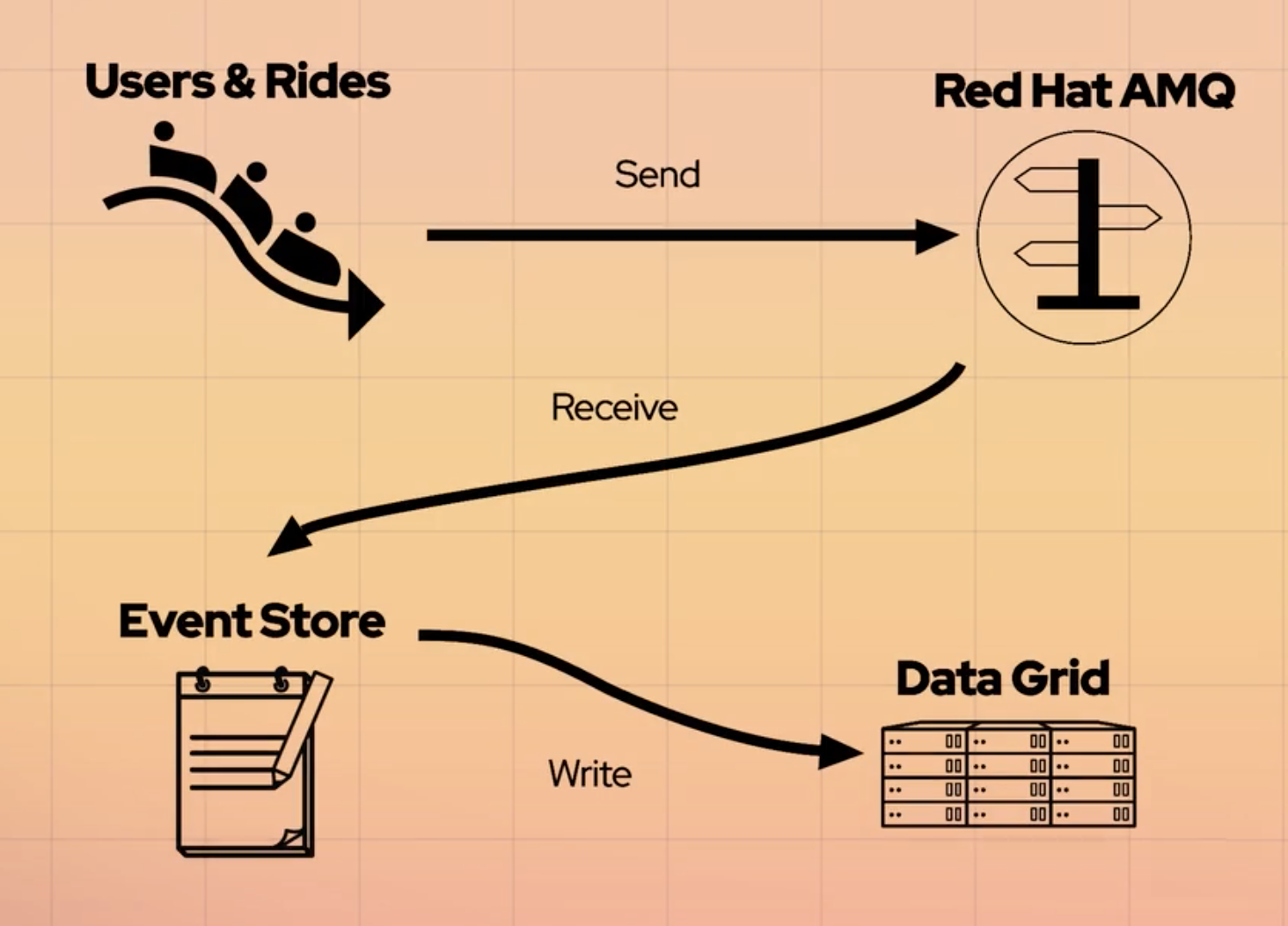 The two event consumers we'll focus on next are the current-line-updater and queue-length-calculator components shown in this diagram:

The current-line-updater component starts with the MainVerticle class. MainVerticle does some configuration tasks, then deploys CurrentLineUpdaterVerticle. That verticle sets up a continuous query on all Users in the data grid that are in the states IN_QUEUE, ON_RIDE, or COMPLETED_RIDE, specifying that no more than 10 users in the COMPLETED_RIDE status should be included. (We don’t care so much about the delighted guests who have finished the ride; knowing the last 10 is plenty.) Once the query is set up, it registers the UserContinuousQueryListener class to receive events from the query.

The final class in this package is simply another instance of the UserMarshaller class.

The queue-length-calculator component calculates how long a User just now getting in line has to wait before they board the coaster. The calculation is based on how many Users are in line, how many Users can ride the coaster at the same time, and how long a single Ride takes. If there are 20 people in line and 10 people can ride at once and the Ride lasts for 60 seconds, someone just getting in line will have to wait roughly 3 minutes. In other words, two complete Rides (neither of which have started yet) will have to take place before everyone in front of the new User has been on the coaster. Two complete Rides take 2 minutes, so the wait time is roughly 3 minutes. If there are 19 people in line, the new User can board the second Ride, so they’ll wait roughly 2 minutes before boarding.

As with all the components so far, queue-length-calculator starts with a MainVerticle to configure the connections and set up the environment. It then creates a QueueLengthCalculator verticle to set up a periodic query that queries the data grid every 10 seconds. The query returns all of the Users that have a state of IN_QUEUE; Users that are on the coaster or have finished the ride don’t impact the wait time. Once QueueLengthCalculator determines the wait time, it sends a message that indicates the wait time to the AMQ queue QLC_QUEUE.

The only other class in this component is another UserMarshaller. 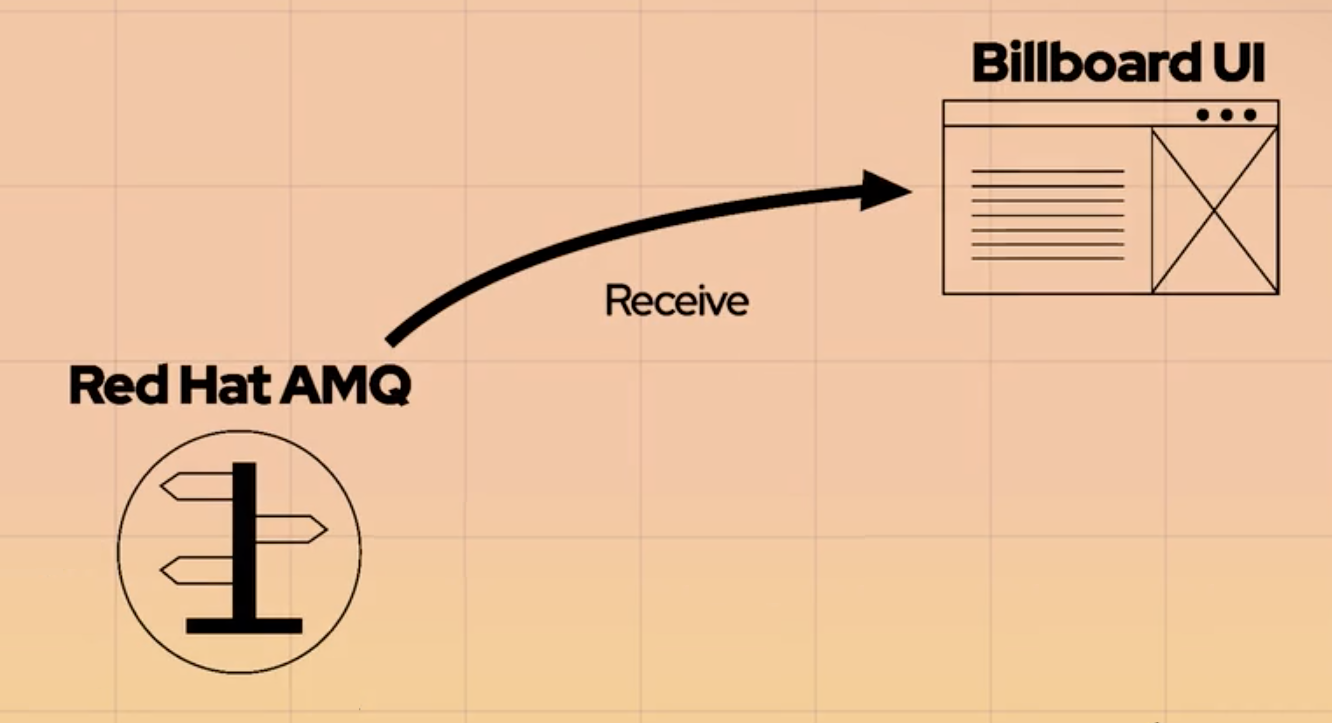 To be precise, the AMQ broker sends data from those queues to the Vert.x event bus. In turn, the updated data from the event bus is sent to the BillboardVerticle class via a web socket. That allows the display to remain up-to-date whenever new data is sent to the CL_QUEUE or QLC_QUEUE. The basic display looks like this: The estimated wait time is in bold type at the top of the display. This example shows 10 riders in the queue. The bottom three, in green, are guests who have completed the ride. The four riders in yellow are currently on the ride, while the three at the top, in blue, are waiting in line. At the top of the panel is an entry field that lets us add a user directly to the queue.

The admin interface uses REST endpoints defined by the WebVerticle class in the event-generator component. When an administrator inside admin.html clicks a button such as Start User Generation, the JavaScript inside admin.html sends the message start-user-simulator to the address named control on the Vert.x event bus. The BillboardVerticle class receives messages on the control address and invokes a REST endpoint. The admin interface uses the following methods:

That completes our tour of the code. Now that we’ve looked at how the reactive system works, it’s time to move on to Part 3, A reactive system in action. That article shows you how to deploy and run the Reactica code.

And, as always, we love to hear from you! We're coderland@redhat.com if you have any comments or questions.