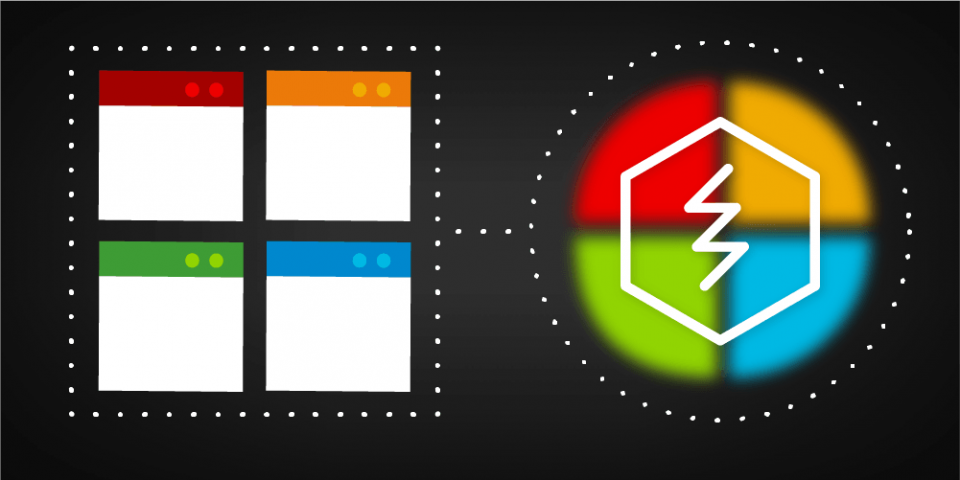 This is the final article in a series demonstrating the process of performance testing Service Binding Operator for acceptance into the Developer Sandbox for Red Hat OpenShift. In Part 4, I explained how I gathered performance metrics for the Developer Sandbox team. I also discussed the additional metrics we used to measure the developer experience using Service Binding Operator.

The payoff comes in this final article, where I present the test rounds I undertook as the application developed and how I interpreted the results.

The following sections show the test rounds as they evolved over time. The title of each test round summarizes the test configuration, in the following format:

Here is the key for understanding the test configuration from each title:

I started with Service Binding Operator 0.5.0, which was at that time the latest version released by Red Hat.

The very first round of the performance evaluation is titled With SBR - 3000 users, 600 active, 600/0 SB, 9000 NS on OCP v4.6.20. We provisioned the maximum number of users specified in our requirements, which was 3,000. Of these, only every fifth user was active, or 600 overall. This was the default ratio used by the Developer Sandbox testing tool.

In this run, the cluster survived, but the numbers were scary for Service Binding Operator. Memory use went up to a peak of 12 GiB and the CPU usage rose to approximately 3 vCPU. Service Binding Operator's performance was also not good, taking up to approximately 20 minutes to process the last of the 600 ServiceBinding requests. Figure 1 shows the charts I generated to observe test metrics. 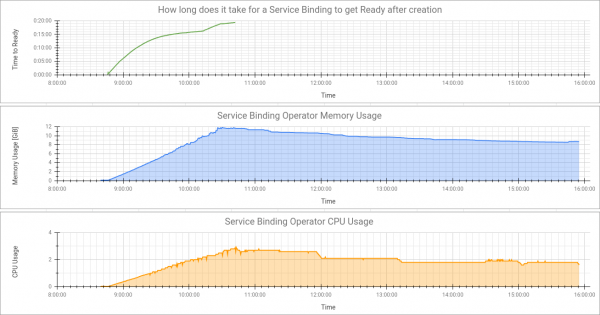 The cluster also survived in this run, but Service Binding Operator consumed an enormous amount of resources. Memory use was still high at 11 GiB, and the CPU usage went over 4.5 vCPU. Service Binding Operator showed even worse performance, as the last of the 1,500 ServiceBinding requests took more than 30 minutes to finish. Figure 2 shows the results. 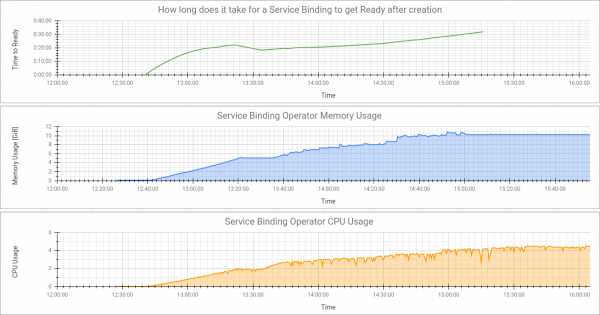 Let's investigate the four interesting phases of this test:

From our analysis of the results and code, we discovered the reason why Service Binding Operator took lots of memory even when it was supposed to be idle (in Phases 1 and 2): It watched for many resources, just in case, that were not related to binding requests. It then cached all that information in memory. Based on that observation, we decided to drop the just-in-case watches. These changes were merged and we released a new version of Service Binding Operator, 0.6.0. Next, we'll look at the results of performance evaluations of this new version.

In this round, we wanted to see what happened when all of the simulated users were active. Unfortunately, I wasn't able to simulate all 3,000 users as active because the time needed for provisioning them exceeded the lifespan of my temporary OpenShift cluster (about 10 hours). So, I had to stop the provisioning sooner than the full capacity of 3,000 users was reached. That is why the following results have only 2,599 and 2,800 active users, respectively.

This run is titled With SBR - 3000 users, 2599 active, 2599/0 SB, 9000 NS on OCP v4.6.20. We saw an impressive performance improvement with this new version of Service Binding Operator after dropping the just-in-case watches. This was true even when the number of active users along with ServiceBinding requests almost doubled, as shown in Figure 4. 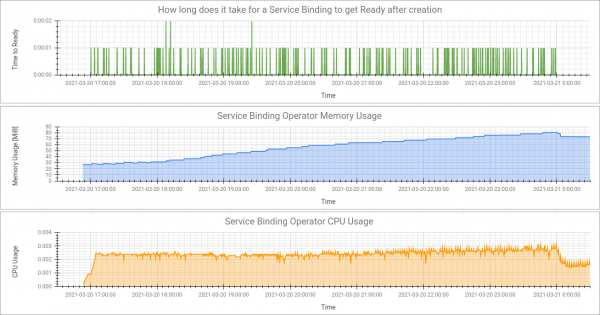 This run is titled Without SBR - 3000 users, 2800 active, 0/2800 SB, 9000 NS on OCP v4.6.20. This was the first time I split the Service Binding Operator metrics into different parts, to understand where the most time was spent. It is interesting to see that the time spent on binding was about 0.5 seconds, even when the time from the creation of ServiceBinding request to the creation of the binding was around 13 minutes in the worst case. This observation revealed that it is not Service Binding Operator that causes the long processing time, but rather something in OpenShift itself—most likely in the API servers processing the incoming ServiceBinding requests. Keep in mind that all of the 2,800 ServiceBinding requests were thrown at the cluster's API servers in as short a period of time as possible.

The results in Figure 5 show that the idle Service Binding Operator took only 25 MiB of memory and almost no CPU. 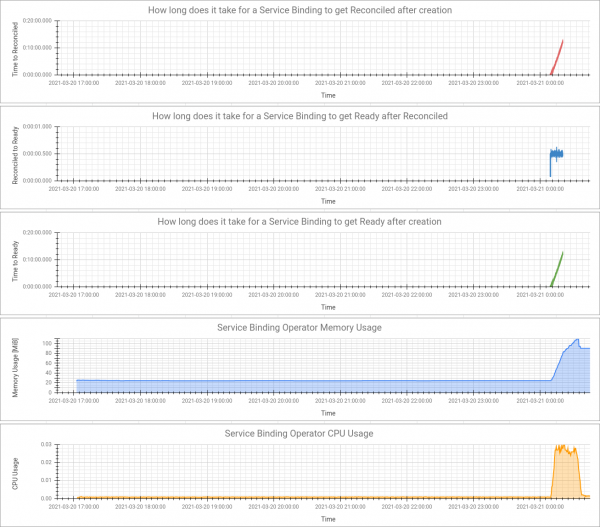 During a couple of attempts, one of the follower nodes in the OpenShift cluster actually crashed. The cause was that the API servers were overloaded with all of the incoming activity of user provisioning, which caused that node to stop responding. Based on that observation, I extended the watched metrics to uncover the bottlenecks, as described in the previous article in this series.

At the same time, a couple of test parameters changed significantly:

I changed my tests to match these relaxed requirements. Also, the version of OpenShift underlying the Developer Sandbox was updated to version 4.7.x, so I updated my OpenShift Container Platform version to match.

Let's examine the test runs under these new conditions. 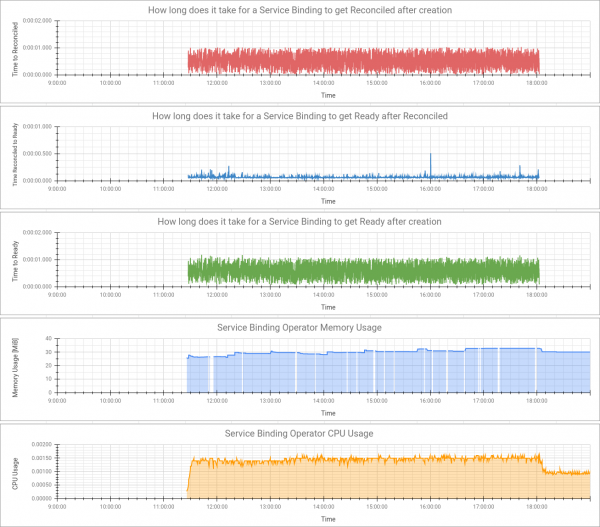 We finished our exploration of Service Binding Operator's performance with one test run on the bug-fix version. 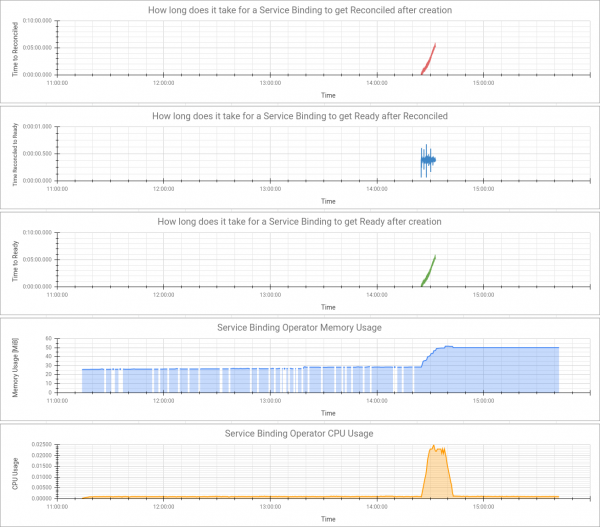 During the evaluation, we improved Service Binding Operator's performance dramatically:

In addition, we demonstrated a problem with the underlying OpenShift cluster, which could crash for internal reasons when fully loaded with active users. Our testing led the Developer Sandbox team to decrease requirements from 3,000 to 2,000 users and to decrease the number of namespaces available for each user from three to two to ensure the stability of the sandbox. Both the improvements to Service Binding Operator and the policy decisions by the Developer Sandbox team demonstrate the value of running performance tests and collecting matrics on Red Hat OpenShift.

Get started with your Developer Sandbox for Red Hat OpenShift