Red Hat Fuse 7 (formerly called Red Hat JBoss Fuse) is now officially available. This cloud-native, distributed solution allows developers to easily develop, deploy and scale integration applications. Architects can compose and orchestrate microservices with Red Hat Fuse to introduce agility to the systems. In this release, Fuse also empowers integration experts and business users to become more productive with the self-service low-code platform. With this new agile integration solution, enterprises can now engage in wider collaboration with and among partners at a much quicker pace.

Narayana is now the transaction technology, to get you ready for handling more-complex distributed transactions.

Jetty is deprecated and replaced by a more streamlined, lightweight web container: Undertow.

One of the most common questions I get from people just getting started with Fuse is, “Why do you need to have so many different options for runtime?” It’s because we believe developers should be able to choose what best suits them, for example:

Building cloud-native applications can be complicated. Integrating them as well as making the integration solution itself be cloud-ready is even more challenging. You need to address the entire software lifecycle as whole, for example, creating applications with a smaller footprint, automating the deployment flow, and monitoring applications in a distributed environment.  Because the Fuse 7 platform’s features and technology that take care of much of this complexity, integration teams can now focus on the most important thing: the business logic of the integration application.

Building a small-footprint microservice/service is the most fundamental thing when it comes to moving integration into the cloud. Both the Spring Boot and Karaf runtimes are lightweight and microservices-enabled. Developers can take advantage of pattern-based integration in Camel, and plugins help developers package their integration application as a container to be cloud-ready.

After deployment, Fuse 7 helps developers to package the application into immutable images. Based on your versioning and deployment strategy, these images can be tagged and sent along to be deployed in different stages of the environment. The platform also takes care of the availability, scalability, and resiliency for the application; scaling up and down the application require just a few clicks in the UI. Or, if you prefer to automate that, you can.  The application not only runs in the cloud, it can also be run as a single, standalone application. All three runtimes are available to run in both scenarios.

Managing a distributed cloud environment is a nightmare: instead of a couple instances, you now have thousands of individual running instances. Fuse gives you a centralized viewing console in the cloud environment, so it will be much easier to locate all the running Fuse instances. Also, each running application is managed by Red Hat OpenShift, which provides comprehensive features for managing applications in the cloud.

When you log in to the platform, you will be greeted with an overview of all the available integrations and connectors as well as the status of the running integrations. 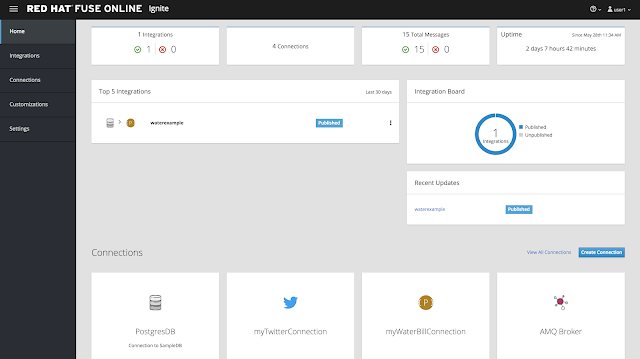 Integrations allow an integrator to create an application by simply dragging and dropping the pre-built connectors or by mapping between input source and output target data.

You can try the new version of the platform here:

So what are you waiting for? Start your new Fuse 7 adventure today.