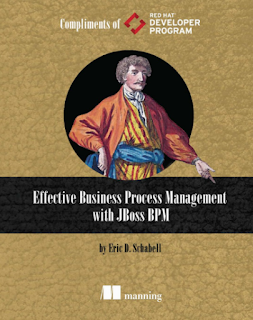 For the last four years I was focused on evangelizing JBoss BPM Suite. The content I produced, the talks I have given and the articles I published led to many requests for a book focused on JBoss BPM products. This got me to thinking and in early November of 2015 I decided to submit a proposal. Hoping Manning would be open to the idea of a book that was not only focused on developers, but also on architects and process analysts. Effective Business Process Management with JBoss BPM was born.

There was a process that went back and forth as the proposal was discussed. Finally, in January of 2016 Manning started a proposal review. It’s where they ask for input from sources in the wild that are knowledgeable of the topics BPM and JBoss.

At the end of February 2016, having collected enough positive input during their review process, Manning committed to the book and I started to write.

The chapters have been flowing nicely and today the Early Access Program (MEAP) has been kicked off. Effective Business Process Management with JBoss BPM is a reality, a book that focuses on developers, architects and process analysts that want to get started with JBoss BPM Suite.

Getting your hands on the book

What is a MEAP?

The Effective Business Process Management with JBoss BPM MEAP gives you full access to read chapters as they are written. You get the finished eBook as soon as it’s ready and receive the paper book long before it’s in bookstores. You can also interact with the author on the forums to provided feedback as the book is being written.

I’m capturing the process in pictures. Plans for sharing exist as I continue to write this book over the coming year. I also push out updates on my progress to several social media channels such as @ericschabell and Schabell Storyteller.

Finished all the editing this fine Saturday… submitted for review! #writerswrite pic.twitter.com/HdXbHY88qm

So come one, come all… get started today with Effective Business Process Management with JBoss BPM.

It’s a labor of love and looking forward to hearing from you as you join me on this journey towards a fully published book showcasing JBoss BPM.